Wage increases are not keeping up with productivity improvement and employers are taking a larger share of national income instead of paying workers more.

In the entire eight years from the election of the Abbott government in 2013 to the end of 2021, private sector wages only increased 1.4% above inflation. In 2021 alone, wages rose just 2.3%, but inflation increased by 3.5%.

Wage increases are not keeping up with productivity improvement and employers are taking a larger share of national income instead of paying workers more. This Centre for Future Work graphic shows the labour share fell just over 11 percentage points between 1975 and 2018 costing workers an average of $16,800 a year. 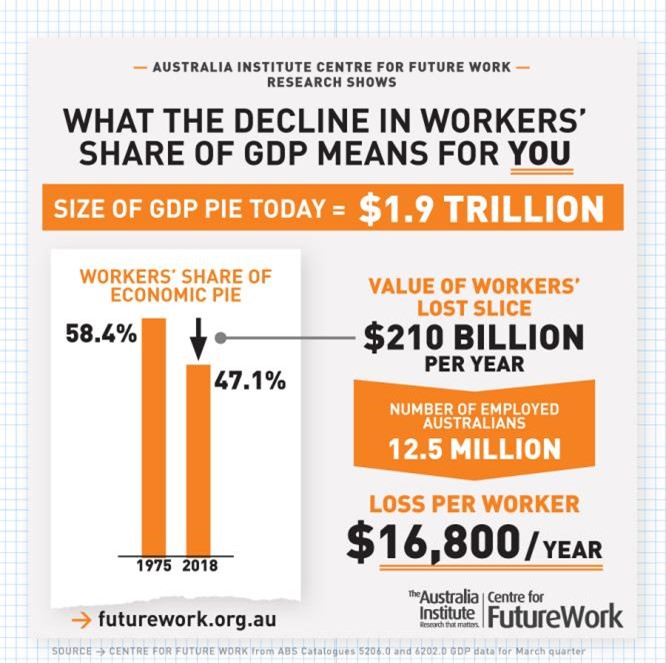 The fall in the wages share is fundamentally because of the loss in workers’ industrial bargaining power. Workers and unions are weaker because of:

On the most recent comparative information, wage inequality in Australia is the most extreme of the OECD countries. The top 10% of wage earners in Australia get 26 times more than the bottom 10%.

Australia has the double whammy – all workers are doing badly because the total labour share of national income is falling and poorly paid workers are doing badly compared with the well paid. Widening inequality is occurring because of the very high ‘wage’ payments made to executives and managers which have spread from the private financial sector to the corporatised ‘public’ sector and to universities.

Little can be expected from the Coalition except further pain for workers.

The Greens currently have the most comprehensive and progressive policies on wages including a living wage and bargaining at whatever level is appropriate (workplace, firm, sector) and with the right to take industrial action unrestricted by bargaining periods.

The ALP is committed to wage theft laws, limits on sham contracting, and improving job security. They also advocate (as do The Greens) measures on the gender pay gap and ten days paid family and domestic-violence leave. At this stage they have no explicit policies on industry bargaining, right to strike or the living wage.

The Greens and ALP policies will lead to improvements for workers, especially the job security of the precarious workforce, preventing wage theft and reducing the gender pay gap. Union access to workplaces will be improved and this should make unionisation easier.

However both parties need to do more about three other things: the structure of bargaining, reducing the inequality in earnings between the top and bottom of the workforce, and protecting union delegates and activists in the workplace. These are imperative and not add-ons. In particular, they require the ALP, and perhaps even some unions, to consider their strategic framework and priorities.