At a ceremony on 25 September 2019 the City of Newcastle honoured SEARCH member and veteran socialist activist Vera Deacon, for her ongoing contribution to the life and progressive movements of the city. About two hundred of Vera's friends and family, together with community leaders, gathered at Newcastle City Hall to celebrate Vera's many contributions to her beloved native city.

Local historian, conservationist and social justice advocate for people and place - especially the rivers - Vera Deacon is a true daughter of the Hunter River estuary and the wider Newcastle region.
She returned to live in Newcastle in 1997 and bought a house at Stockton, the nearest place she could live close to the river and the islands where she had been reared. She joined the Kooragang Wetlands Rehabilitation Project where she has volunteered for the past 20 years, with hundreds of other dedicated conservationists, to plant thousands of trees and reclaim the wetlands and her beloved Ash Island as green lungs breathing for the residents of the Hunter into the future.
Newcastle Lord Mayor, Nuatali Nelmes, presented Vera with the Keys of the City, naming her a Civic Ambassador with the title “Freeman of the City”. Vera quickly amended that title to “Freewoman of the City”. The Lord Mayor’s citation on behalf of the City of Newcastle is in the box at right.
SEARCH member Rod Noble was one of those who provided a testimonial in support of Vera’s Lord Mayor’s award. He mentioned her longstanding membership of the Communist Party (CPA) and noted:

She never became obsessed with success but more with getting on with whatever project she was involved in. If put end to end, these projects would take up many normal lifetimes. Whether it was local history, labour movement history, Aboriginal history, cultural history, environmental activism and much more. 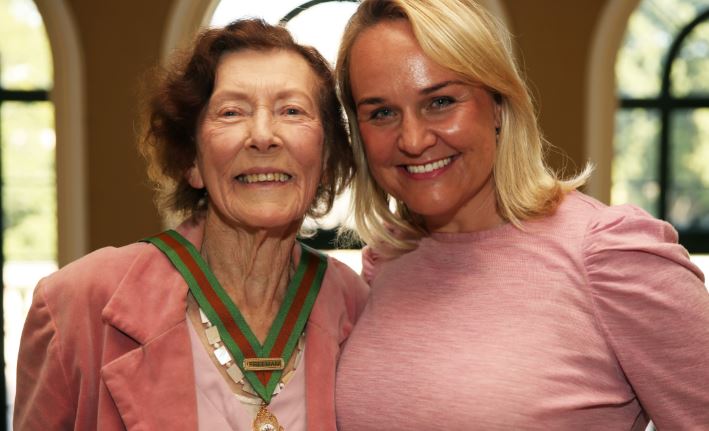 The ceremony also recognised the launch of a ‘chapbook’ in Vera’s honour, published by Yarnspinners Press. Many of the stories and articles in the chapbook were retrieved from old Tribunes dating back to the early 1950s and anthologies in the series “The Tracks We Travel”.
Singing Back the River: A Miscellany of Select-ed Writings by and for Vera Deacon comprises a signed and numbered limited edition of 250 books. The chapbook is generously illustrated with linocuts by famous Melbourne social realist, Noel Counihan. The publishers gratefully acknowledge the support for this project from the Counihan Estate and in particular the artist’s son, Michael Counihan.

- by Marilla North and Brian Aarons

The City of Newcastle deeply appreciates the contribution that Vera Deacon has made to the ongoing preservation and interpretation of our incredibly rich local history.
Born on the banks of the Hunter River, Vera’s personal story is a remarkable insight into Novocastrian history itself, spanning all the way from the Great Depression to this day.
Vera remains an activist steadfastly involved in progressive social and political movements.
She is a trailblazer for women and a leading cultural activist integral in the development of Australian literature.
Newcastle has long been a progressive city where community activism and solidarity have been intrinsic in creating change for the betterment of society.
Newcastle stories will be remembered, thanks in part to the Vera Deacon Regional History Fund.
Through her generosity and passion, Vera has ensured that current and future generations of Novocastrians will be able to access the records and accounts of those who have come before them.
It is these stories that I hope will encourage future generations of activists and progressives.
It is Vera’s story that I hope will inspire Novocastrians of all ages to remember our past for the prosperity it has created for us all.
Today, the City of Newcastle recognises this immense contribution by naming Vera Deacon as a Freeman of the City of Newcastle.