Sam Lewis was a giant of the Australian teacher-union movement whose influence is still evident today. Many of the organising principles and much of the political culture defining the NSW Teachers’ Federation, and indeed the federal union, the Australian Education Union, can be traced back to his more than 50 years of activism. He joined the CPA in the early 1930s.

Samuel Phineas Lewis was born in Sydney on 15 June, 1901 to Judah Henry Lewis and Rebecca Caroline Myers, who had been married in Sydney’s Great Synagogue.

Sam was educated at Crown Street Public School, then Cleveland Street Intermediate and Sydney Boys’ High. He enrolled in a Bachelor of Economics degree at the University of Sydney, but left after a year and completed a year of teacher training at Sydney Teachers’ College. Years later, in 1934, he returned to the university to complete his economics degree.

Sam’s first teaching appointment was to Bondi Public School in 1921. In the post-war period, many young teachers were enthusiastic about the ideal that education could become the key to creating a better world. Sam was no exception. Almost immediately he became active in the NSW Public School Teachers' Federation, as it was then known, attending his first state council of the union as a delegate in 1921, just three years after the union’s formation.

In the 1920s, Sam Lewis campaigned for Jack Lang, but by the start of the Depression much had changed, with Lang turning against the Left. Sam Lewis was one of many radicals within the teaching movement to look for new political formations. “Against a background of the Lang Plan, a Labor Party split, and deepening Depression in 1931 the small group of radical teachers formed a new organisation, the Educational Workers' League [EWL].”

Sam had been a key player in this development and was elected as the League’s secretary at its first meeting in the Trades Hall. Young classroom teachers (known as ‘Assistants’) in the group were also motivated by their opposition to the conservative Teachers’ Federation leaders at the time, who they felt had allowed teacher salaries and working conditions to deteriorate in the early Depression years.

Many of the EWL’s demands were extraordinarily prescient: national teacher accreditation, annual increments, equal pay for women, reduction in class sizes to 30, temporary positions to be made permanent, withdrawal of scripture classes, raising of the compulsory leaving age, no discrimination against married women, clerical staff to be appointed to all schools, abolition of corporal punishment, as well as for “elimination of all Imperialist teachings from school-books and curricula…”. Publication of the League’s demands led to a vicious backlash by conservative forces, with accusations in the Sydney Morning Herald of 27 July, 1931 that “Communism was rearing its ugly head…”.

In late 1932 the NSW state government, led by Premier Bertram Stevens, passed legislation known as the Married Women (Lecturers and Teachers) Act, forcing all married women to leave the teaching service. While some within the Federation supported the Act, arguing that it protected the male breadwinner, Sam Lewis and others campaigned vociferously against it. Fifteen years of Federation campaigning led to repeal of the Act in 1947, but not before it had destroyed careers and led to enormous financial hardship.

Sam had joined the CPA in the early 1930s, becoming secretary of the Coogee branch. Later he was elected to the Party’s District Committee, having adopted an assumed surname, Curtis. He also unsuccessfully stood for election twice for the new State Labour Party, which had significant overlapping membership with the CPA.

In 1938, Sam took three months’ long service leave from teaching to organise a national conference, “Education for a Progressive Democratic Australia”, which gathered hundreds of representatives from trade unions, parent organisations, local government, and other professional education associations. One of the Conference’s key demands was for federal financial assistance for public schools, a campaign that continues to this day.

Sam’s future wife, Ethel Caroline Teerman, had graduated from the University of Sydney, majoring in Latin, and by 1930 had been appointed as a teacher to Lithgow and then to West Wyalong. Her parents were politically active, her father as a miner and her mother as a coalminer’s wife actively involved in the women’s auxiliaries supporting striking miners. Ethel became active in the Teachers’ Federation while at West Wyalong, as well as joining the EWL, where she met Sam Lewis, and the CPA. Sam and Ethel were married in 1940, but it must have been a bittersweet moment, as the 1932 Act forced Ethel, by then a member of the Federation’s executive, to resign from teaching.

In 1943 Sam was elected as deputy president of the Teachers’ Federation and then, in 1945, as president. In 1946 he led a campaign for increased salaries, with the Federation becoming the first union after the war to secure significant increases for teachers, leading to successes in other states and industries. 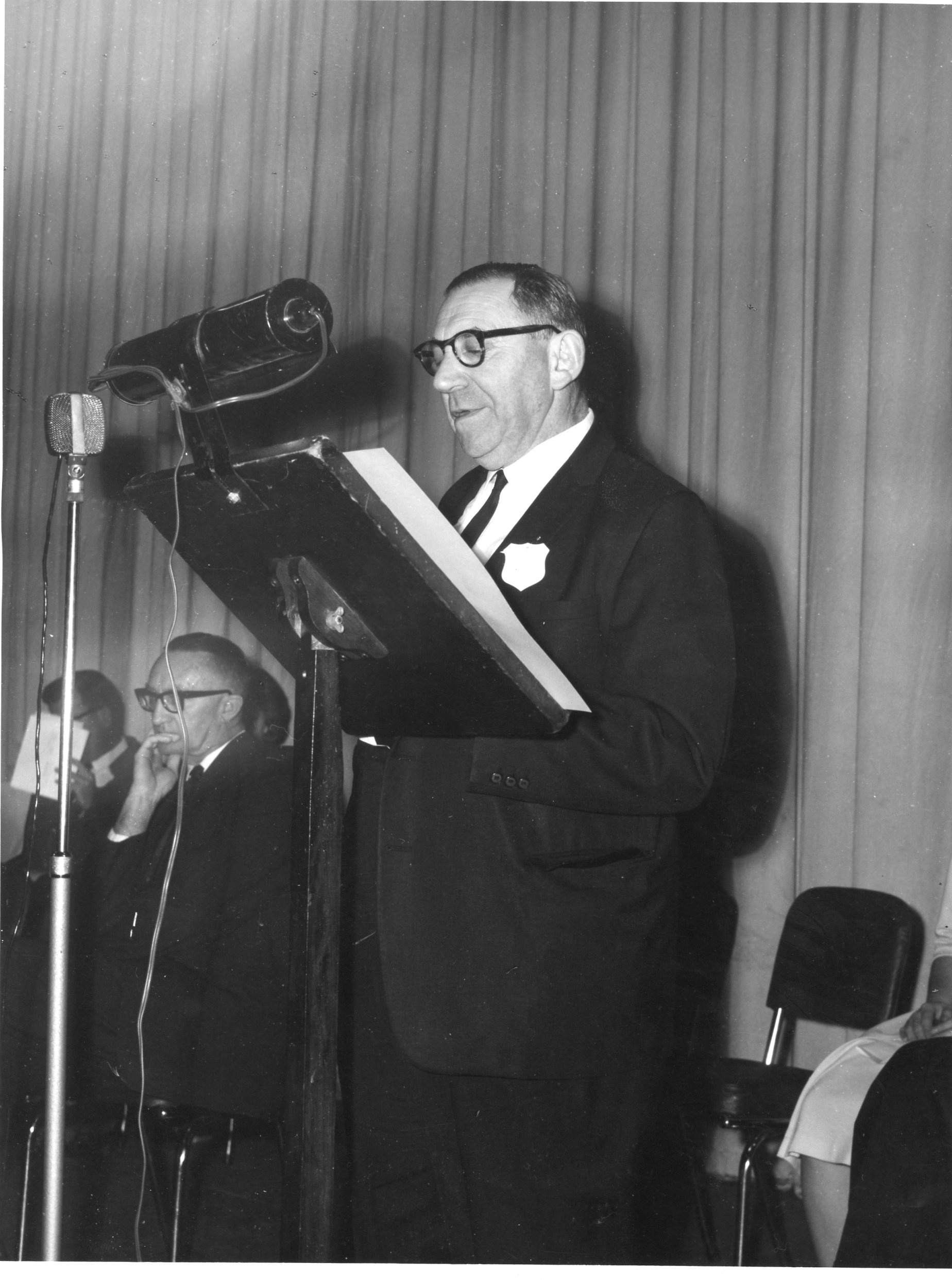 Before the war, both Sam and Ethel had been involved in the Movement Against War and Fascism. Therefore, it was not surprising at the 1946 Federation annual conference following the successful salary campaign, that Sam, in moving acceptance of the union’s annual report, linked salaries and improved working conditions with the maintenance of peace and unity among peoples. Later in 1946, tapping into the post-war optimism, Sam was instrumental in organising a national campaign called “A New Deal for Education”, which included a conference held in Sydney attended by representatives of nearly 800 organisations: teacher associations, 276 parent groups, trade unions, labour councils, infant school clubs, and local government councils. One of its key demands was for a massive injection of federal government funding into public schools.

In 1947 Sam, as president of the national body, the Australian Teachers’ Federation, was endorsed to be part of the Australian delegation to the second conference of the United Nations Educational, Scientific and Cultural Organisation (UNESCO), to be held in Mexico City in November 1947. By now, anti-communist forces were targeting Sam and his colleagues. An organisation called the Teachers’ Federation Anti-Communist League had been formed to mobilise opposition to Sam’s presidency.

In federal parliament, Jack Lang attacked Sam, calling him a “notorious communist”, and later devoted an entire chapter on “Samuel Phineas Lewis” in his 1947 publication, Communism is Treason. Lang called on the Chifley government to withdraw Sam’s delegate credentials and to cancel his passport, in an attempt to prevent his participation in the UNESCO conference, even though he was attending at his own expense. Lang failed.

Sam returned from Mexico encouraged that UNESCO had prioritised education spending over weapons of war. In his address to the union’s 1951 annual conference, Sam was clear:

"The greatest single factor on the world scale causing inflation and leading to the undermining of the living and cultural standards of the people is enormous expenditure on production of armaments. Teachers are concerned very deeply with conservation: conservation of natural resources, conservation of human resources. They are the agents in the battle against material and moral erosion, against the scorching of human flesh and the searing of the human spirit."

Despite successful salary campaigns in 1946 and 1949, Sam, targeted by anti-communist forces, was defeated as president in 1952. He went back to teaching at Paddington Junior Technical, but continued to lead the debates within Federation from the floor of its state council meetings. Between 1958 and 1961, Sam was elected as deputy president of the union, before finally being re-elected as president in 1964.

The Federation had campaigned for decades for equal pay for women teachers. Indeed, the issue was initially carried as a campaign objective back in 1920, perhaps the first union to have done so. Despite objections from some conservative quarters even within Federation, it remained a critically important campaign. It was not until 1958 that the NSW government agreed to equal pay for women teachers but, even then, phased it in over five years. It was widely recognised that Sam had used his position within the union to ensure it remained a priority issue: “…in the Federation there were few men other than Sam Lewis who so consistently supported … the tight group of women who were advocates of Equal Pay.”

Throughout his working life, Sam ensured that the NSW Teachers’ Federation was an activist union. He regarded teachers as intellectual workers and fought for their rights and their professional status. Sam and his comrades believed that the industrial, the political, the social and the professional were indivisible. To this end, he also championed the creation of broad alliances and pioneered community-based campaigning alongside parent groups, other unions and community organisations. He established democratic decision-making structures within the union, based on his strong belief that this would lead to more effective campaigning while protecting the union from outside interference.

Sam’s last address as president was at the Federation’s annual conference in January 1968, where he told the delegates that the “unity of teachers can be and should be part of the greater unity of the peoples – the People’s Symphony.”

A powerful and influential orator, many recognised him as one of the most engaging public speakers of his generation. He was known for his love of words, his sense of humour and his sharp wit. It was a cruel irony when, having suffered a stroke in 1974 which left him partially paralysed, he lost the power of speech. He died on 16 August, 1976.

Not long after he returned from the conference in Mexico, UNESCO declared that “All Wars Are Fought Against Children”. Sam ensured that this concept was embedded into the political psyche of the NSW Teachers’ Federation. In recognition of his influence in this regard, in 1983 the Federation established the annual Sam Lewis Peace Awards, offering children in NSW public schools an opportunity to express a message of peace, tolerance and hope through art.

Maurie Mulheron was a teacher for 34 years, including 10 as a high school principal. He was an active member of the NSW Teachers’ Federation throughout his working life. In 2011 he was elected President of the Federation, taking up the position in 2012. He served four terms until 2020, elected unopposed each time. Between 2016-2020, he was also Deputy Federal President of the Australian Education Union, to which he was awarded Life Membership in 2020. Maurie played a central role in the schools funding and save TAFE campaigns throughout this period.