Instead of passing laws to limit protests about climate, the Queensland Government should initiate serious public dialogue about real action on climate change.

Protests calling on governments to declare a state of climate emergency were held in capital cities throughout Australia in the week of 7th October. Brisbane protesters, many subscribing to the theme of Extinction Rebellion, were peaceful, intrepid and innovative. Among other things, they blocked cross-river bridges and major inter-sections with their bodies and the occasional boat and ute to which some glued or locked themselves. 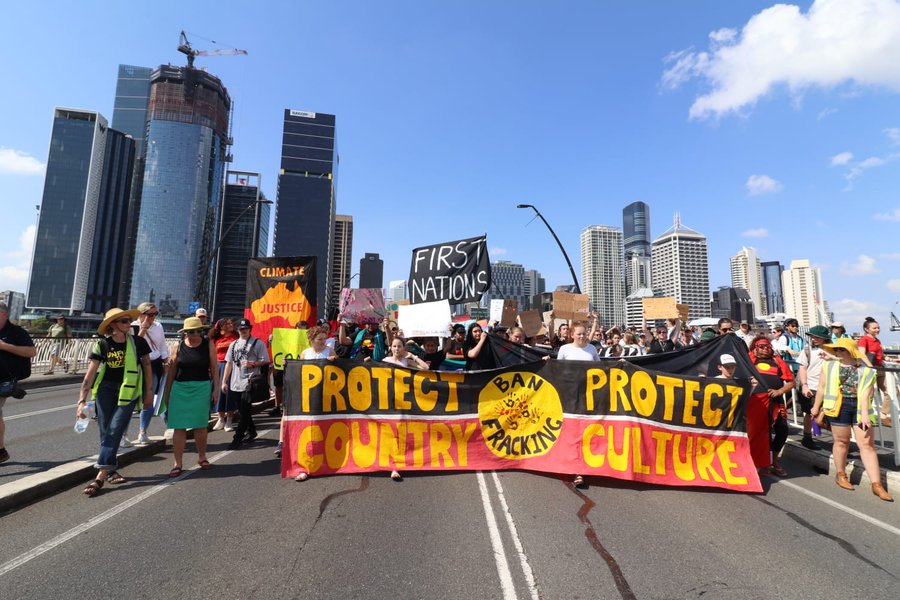 While not going as far as the media personality who suggested that motorists should treat protesters as ‘speed bumps’, Queensland Premier Anastasia Palaszczuk was clearly displeased. She said the state was seeing ‘“major disruption” from the civil disobedience of climate activists’ and is fast-tracking legislation about ‘dangerous devices’.

New legislation applying to disruptive protesters was foreshadowed in August and introduced to Parliament on 19th September. The Government has now rushed the committee review and the proposed amendments to the Summary Offences and Police Powers Acts, will go to Parliament in the week of 21st October.

The legislation is expressly about the ‘use of dangerous attachment devices’. Four named devices are banned - they are, in the words of the legislation, a ‘sleeping dragon, dragon’s den, monopole and tripod’. Each is defined; a sleeping dragon is an anchor point with a ‘casing that shields the person’s hand, or the binding or lock, from being released by another person’; the example given is ‘two large steel pipes welded together at an angle with a thick pin fixed in the centre’. A dragon’s den is a sleeping dragon put inside something else like a barrel of concrete. The Bill also make illegal any attachment device that has been ‘modified’ with materials or chemicals that may cause injury during its removal.

The legislation makes it an offence to use such dangerous devices ‘to unreasonably interfere with the ordinary operation of transport infrastructure’ (the example given is stopping the passage of rolling stock on a railway) or to stop people entering or leaving a place of business or halting the ordinary operation of plant or equipment. The legislation gives police powers to search any person or vehicle, without a warrant, where they reasonably suspect there is a dangerous device that may be intended for use in a protest action. The police can also seize and dispose of such devices.

During the Brisbane climate emergency protests, the Premier and the Police Minister said that the use of dangerous devices was making disruptions intolerable and putting police, fire-fighters and emergency service workers in danger. The Police Minister Mark Ryan had suggested that the devices were “laced with booby traps” and “designed to harm”. The explanatory notes for the Bill include the statement that ‘It has been reported some people have claimed that they “have placed glass or aerosol cannisters inside devices”’.

Note no specific, evidenced instances are cited. As Andrew Paine states in a submission to the Parliamentary Committee, ‘This sentence would fail the most basic test of valid evidence requirements, and yet the Queensland government is proposing introducing laws that could imprison people for up to two years on the basis of what “it has been reported some people have claimed”’.

Human rights organisations and lawyers are severely critical. For example

The Queensland Council of Unions (QCU) has been especially critical stating that these laws ‘impinge on the right to protest peacefully’ and ‘may impinge upon the rights of all Queenslanders, not only protesters’. The QCU recognises the validity of the health and safety concerns for police, fire-fighters and train drivers. It acknowledges the constructive efforts of the Queensland Police Union in seeking solutions and argues that constructive solutions need inclusive discussions not reflex action through bad legislation.

The QCU highlights the dangers of being on a ‘slippery slope’ - how ‘passing these laws opens the door to future amendments which would see protest rights or civil liberties further diminished. This is especially pertinent since it is not clear that the police service has asked for extra powers. Instead, the origins of these anti-protest laws seem to owe more to the Adani situation.

Both the Resources Council and Aurizon want the new provisions extended to make it an offence for organisations that plan the use of ‘dangerous devices’. This would bring back the conspiracy laws used against workers and unions in the nineteenth century and the emergency declarations used by the Hanlon ALP against rail workers in 1948 and the Bjelke-Petersen Nationals against electricity workers in 1985. As the Council of Unions says, it really is a slippery slope despite the Government’s insistence that it supports ‘the right to peacefully assemble’.

In February 2019, the Queensland ALP Government’s Human Rights Act was passed. It protects 23 rights and has been described as ‘the most broad reaching and accessible’ Human Rights Act in Australia’. The Human Rights Act should have been a glorious final  rebuff to the ALP and National Party authoritarianism of the 1940s to 1980s. Yet these new anti-protest laws breathe live back into the ghosts of Ned Hanlon and Joh Bjelke-Petersen. Instead of passing laws to limit protests about climate, the Queensland Government should initiate serious public dialogue about real action on climate change.