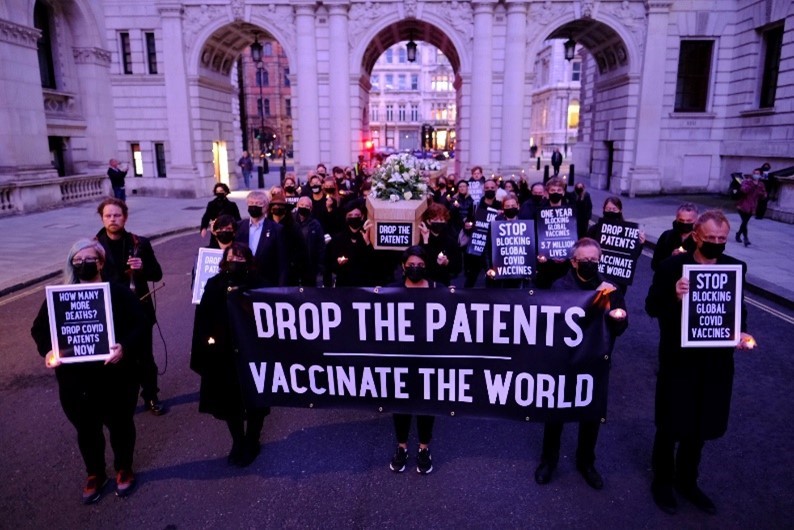 After a strong community campaign by AFTINET and other community groups, Trade Minister Tehan finally announced in September that Australia would support the temporary waiver of World Trade Organisation rules on patent monopolies for COVID-related vaccines and other products. The waiver is supported by the World Health Organisation and by over 100 of WTO member countries. It is needed because WTO rules give pharmaceutical companies monopoly control of the quantities and prices of vaccine. This has resulted in less than 4% of people in low-income countries having access to vaccines, with millions dying while more infections COVID strains like Delta develop. The waiving of monopolies on vaccines would enable a vast increase in production of affordable vaccines in countries like India and South Africa which already produce generic medicines.

The campaign included 50,000 Australians signing petitions,  an Essential Media poll that showed 62% of Australians across the political spectrum supported the waiver and thousands of messages to local MPs.

This was an important victory in the campaign, but more effort is needed change WTO rules. AFTINET and Shadow Labor Trade Minister Madeleine King called on the Australian government to become a formal sponsor of the waiver at WTO meetings held in October. Senate estimates hearings last week revealed that the government has not agreed to be a sponsor but claims it is holding talks with both waiver sponsors and opponents to achieve a “convergence” on the waiver. AFTINET and others have criticised the government for having an each way bet and urged them to sponsor the waiver.

Despite protests from European and African civil society groups the UK, Germany and Switzerland still continued to block the waiver at the October WTO meetings. Clearly more decisive action is needed by Australia, the US and others which claim to support the waiver.

The G20 summit of the world’s richest countries held on October 29-30, including Australia, did not mention the waiver but promoted vaccine donations through the COVAX fund, endorsing the World Health Organisation targets of 40% of people in all countries being vaccinated by the end of 2021, and 70% in 2022. While these donation may be  enough to vaccinate health and emergency workers, they are simply not enough to vaccinate the majority in low-income countries without the vast expansion of global production enabled by the waiver. COVAX donations for 2021 have not even met an earlier target of 20% in 2021.

Oxfam International commented that “Paltry and unfulfilled promises of donated doses will not end this pandemic, nor will pathetic hopes that greedy pharmaceutical corporations will at some point volunteer to do the right thing. It is beyond time that the rights and the recipes for these lifesaving tools were shared as global public goods”

The necessity and urgency of the waiver for vaccine monopolies has been dramatised by a report by the US Public Citizen organisation which analysed leaked secret contracts that expose Pfizer’s ruthless use of its monopoly over the supply and price of vaccines to extract maximum profits. For example, Pfizer’s secret contract to sell vaccines at a price it decides to Brazil include that Brazil agrees that, in the event of non-payment, Pfizer can make claims against its public assets, but there can be no penalties for Pfizer if deliveries are late. The government cannot accept Pfizer vaccine donations from other countries or buy Pfizer vaccines from others without Pfizer’s permission. If this occurred, Pfizer could immediately terminate the agreement and Brazil would be required to pay the full price for any remaining contracted doses. Pfizer recently reported that its annual revenues this year from vaccine  sales are predicted to be $36 billion. Millions are dying while it continues to exploit its monopoly.

The campaign for global vaccine equity continues in the leadup to the WTO Ministerial Meeting on November 30-December 3. For more information and action, see www.aftinet.org.au

Dr Patricia Ranald is the honorary convener of the Australian Fair Trade and Investment Network and an honorary research associate at the University of Sydneywww.aftinet.org.au