Len Reason wrote agitprop sketches for Brisbane’s Unity Theatre and was a member of the CPA from 1939 until sometime after World War II. He later became an advertising executive and was responsible for the infamous “Turn on the Lights” campaign that swept the Liberals to power nationally in 1975.

Len Reason’s leftist trajectory took a familiar form: a youthful enthusiasm, driven by conversations around the family table amid an unsettling political climate, followed by a retreat from political engagement, as the demands of adult life kicked in. What makes Len’s case interesting is that the passion of his youth – producing propaganda in the form of plays and sketches to further pacifism and the workers’ cause – merged seamlessly into the passion of his adult life – producing propaganda to flog ‘stuff’ to Australian consumers.

As his name suggests, Leonard Anzac Reason was born on 25 April 1920 at Goondiwindi, Queensland. The Reason family had emigrated from Britain at the end of 1919. His father, Samuel, found work as an agent for the recently formed State Government Insurance Office. Like his youngest son, Samuel seems to have had a literary bent: he supported the Allora School of Arts, organising the debating society and donating books.

Len was the youngest of three boys, conceived to replace a lost third son: brothers Stan and Wal were more than a decade older. The family settled at Allora before moving to Brisbane, where Len completed two years of secondary schooling. At 13, he started his own monthly newspaper (circulation 30) and the Courier-Mail published his first piece of writing when he was 15. After leaving school, he found work as a salesman.

In 1939, aged 19, Len joined the Unity Theatre group in Brisbane and the CPA. He was introduced to the group by the artist Roy Dalgarno (1910–2001), a founding member of the Workers’ Art Club and a Party member since 1933. Len later explained that he joined the group out of anti-war sentiment, no doubt influenced by his father: Samuel had fought on the Western Front and, like many others, returned a committed pacifist.

For an aspiring writer, the Unity Theatre group offered what historian Stuart Macintyre has called “an ambience of cultural engagement”. The group was a cultural initiative of the period of the ‘united front’, formed in the early 1930s in an attempt to bring all sections of the labour movement – the unions, political labour and the Communist Party – together in unity against a common enemy, fascism.

By the time Len joined the group, the united front had broadened into the popular front: workers outside of the unions, farmers and the middle class were now mobilised to join with the labour movement against fascism. As well as producing radical plays on working-class themes, the Unity group performed agitprop sketches in factories and workshops. Len wrote a sketch for the group called Four upon the Floor, a satire on Premier Forgan Smith’s plan to expand state government powers. His radio play Fifty-five Thousand aired in June 1940 and another play, No Armistice, was presented to a mining audience at Booral in New South Wales.

In December 1941, Len “reluctantly” joined the army, as the Party directed. He served as a wireless operator, rose to the rank of sergeant, and endured two years in New Guinea. He married Gwenda in August 1944 and was demobbed two years later.

In 1950 Len joined the Paton Advertising Service in Melbourne as a copywriter; by the end of the decade, he would be managing the firm. In his spare time, he continued writing leftist “radio plays and other stuff”; his satirical radio play Featherstone Faces the Future was broadcast in Melbourne on 22 February 1951. With comedian Willy Fennell in the leading role, the play described “a trade unionist’s paradise”, a future in which employers seeking labour had to “canvass workers’ homes to plead with them to accept a job”. Melbourne’s Argus described the play as “a parody, which envisages conditions in 1958 as being a complete reversal of conditions in depression years, [and] provides mainly amusing angles on a current serious theme”.

By the mid-1960s, Len had left Paton’s and was managing the Melbourne branch of Masius Wynne Williams, a global advertising network based in London. His experience writing for the Unity Theatre was the bedrock of his success in advertising: sketch-writing and copywriting demand the same basic skillset. But Len was loath to advertise the fact he was an “ex-communist” who was “still employing the techniques [he’d] picked up as [a] Bolshevik propagandist” and “lived in terror” of the right-wing press finding out about his radical past, fearing the reactions of his conservative clients, which included ANZ Bank, National Mutual Insurance and Carlton United Breweries.

Australia’s involvement in Vietnam prompted him to again stand up. In 1970, the novelist Peter Carey, then employed as a copywriter at Masius, wrote and produced a campaign to promote the Vietnam Moratorium marches, with Len’s approval. Masius picked up the tab and Len marched with the Moratorium crowds.

In the financial and political turmoil of the 1970s, Len’s shift to the right gained momentum. A copywriter with strong Liberal Party contacts joined Masius, and the agency was invited to pitch for the party’s advertising business. Len recalled: “…the invitation was literally out of the blue since I was still regarded as a red… I was surprised, intrigued. And yes, I guess flattered.” Masius won the pitch and produced the infamous “Turn on the Lights” campaign that sealed the Liberals’ election victory in 1975. By the time of the 1977 election, Len Reason’s radical past had become a badge of honour for the Liberals, and two years later, the Fraser government rewarded him for “changing his vote” with an OBE for “service to the advertising industry”. 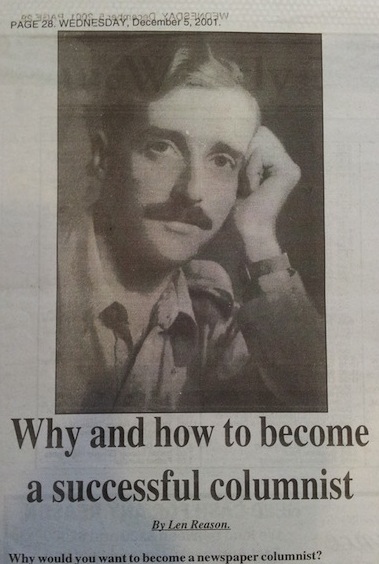 Len retired from advertising in 1980, moving with his wife to Daylesford. The final three years of his life were remarkably productive. From early in 2001 to his death in 2003 he wrote a weekly column for the local paper. Sometimes, he reflected on his former allegiance: “I certainly was a Communist when I was young. It seemed the only alternative then. But I’m still a leftie.” In doggerel, he described his youthful activism:

I was easily inveigled

To be a commo while

the party was illegal

and in mum’s Brisbane domicile

Whereon I ran off calls to strike!

a puzzle to many a plain clothes cop.

Jackie Dickenson completed a PhD in History at the University of Melbourne in 2005. She has published extensively in labour history, political history, and advertising history, including Renegades and Rats: Betrayal and the Remaking of Solidarity in Radical Organisations in Britain and Australia, 1840–1940 (MUP 2006); Trust Me: Australians and their Politicians (NewSouth Publishing 2013); Behind Glass Doors: the World of Australian Advertising Agencies 1959–1989 (with Robert Crawford, UWAP, 2016) and Australian Women in Advertising in the Twentieth Century (Palgrave Macmillan 2016).

Macintyre, S., The Reds: The Communist Party of Australia from Origins to Illegality (St. Leonards, NSW: Allen and Unwin, 1999).

O’Brien, A., “The Road Not Taken: Political and Performance Ideologies at Melbourne