Ina Heidtman has been a trade union activist and member of the CPA and the Socialist Party of Australia (SPA) for more than 60 years. She is the first and only woman to be awarded Life Membership of the Maritime Union of Australia (MUA).

The names of Jim Healy, Tom Nelson, Eliot V Elliott and Pat Geraghty are synonymous with the rich history of struggle waged by Australian wharfies and seafarers in fighting for justice both at home and across the seas. Less well known is the role of communist women in the history of our country’s militant male-dominated blue-collar unions. Women not only fulfilled key support roles, they were often significant activists in their own right. Ina Heidtman was one such woman. In telling her story, we pay tribute to the many women who may not have been union officials but who played key roles in building militant unionism in this country.

Ina Katherine McConnell was born in Balmain, Sydney, and raised there in a staunchly union family in the midst of the Great Depression. Her mother, Famie - always known as “Mrs Mac” – was a cleaner and member of the Miscellaneous Workers’ Union. Mrs Mac was left to raise Ina by herself after Ina’s dad, a Miners’ Federation member, was killed in an electrical accident in the late 1930s in the mine that ran under Sydney Harbour.

Politics and unionism ran in the veins of the McConnell household. Wharfie and renowned communist party activist and orator , Stan Moran was part of Ina’s extended family. It perhaps was inevitable therefore that in 1956 Ina started as a junior in the Sydney offices of the Waterside Workers’ Federation (WWF).

She attended secretarial courses, showed great promise, and before long was made executive assistant to the legendary trade unionist and communist Tom Nelson, secretary of the WWF Sydney Branch. Ina would go on to work over the next 40 years as the office manager and executive assistant to every Sydney branch secretary of the WWF and, upon its amalgamation with the Seamen’s Union in 1993, the MUA.

Tom Nelson was elected WWF President in 1942 and served as branch secretary from 1947 until 1973. Together with WWF federal secretary, Jim Healy, he played a leadership role in breaking the notorious and brutal “bull system” on the wharves, where only the strong and most obedient were given work. In 1938 under the bull system, Nelson was fined 30 shillings by the courts for refusing the employer’s direction to continue working more than 24 hours consecutively.

At the age of 18, Ina married Ted Heidtman in 1953 and they shared their life together until Ted passed away in 2015. They lived virtually their entire lives in Balmain where they had grown up. Ted and Ina were both mainstays of the Annual Toast to May Day.

Ina’s contribution to the WWF was marked by being continuously at the forefront of introducing the union to new and more efficient work systems and technologies. She excelled at planning and logistics. Ina’s contribution was political as well as administrative; as former WWF Branch Secretary Donovan recalled, “if there was a political campaign coming up, Nelson would inform Ina what was needed to be done and she would run it in partnership with the officials.” In the 1950s, Ina played an important part in the campaign to move the industry from casual to permanent jobs, and in fighting off attacks on the union by the Industrial Groupers. Ina encouraged young wharfies to come into the union rooms where she would train them to campaign. Jim Donovan remembers her teaching members of the WWF Youth Committee how to write leaflets and print banners.

In 1974 Ina and her close mate and comrade, Audrey McDonald, were members of a women’s delegation to the Soviet Union and the German Democratic Republic to study women’s status and rights in the socialist countries. During their trip they visited Wiederau in Germany – Clara Zetkin’s birthplace and the location of the museum named after her. It was Zetkin who proposed to the 1910 women’s conference of the Second Socialist International held in Copenhagen that 8 March be marked as International Women’s Day (IWD). On their return to Australia, Ina and Audrey wrote Clara Zetkin – Her Life and Work, published by the SPA. 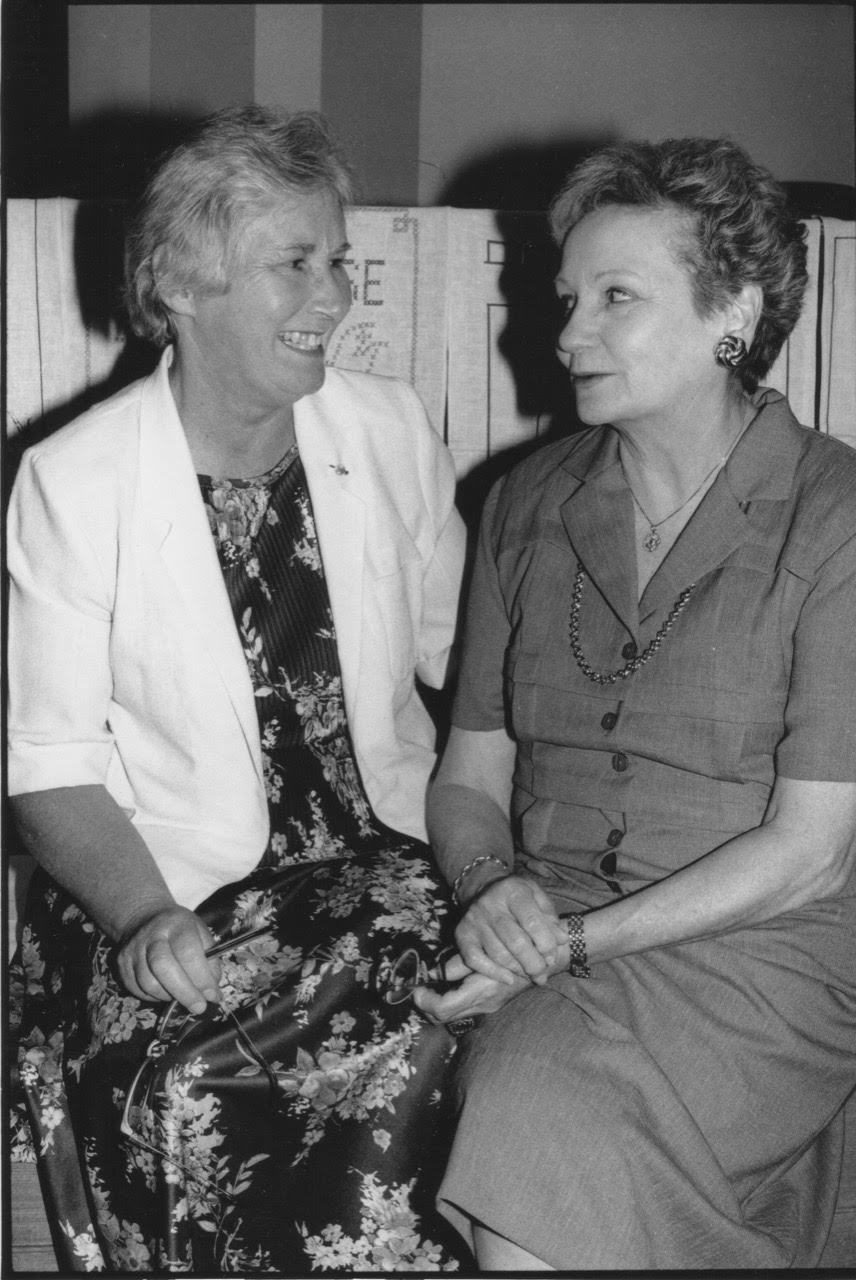 Ina took a keen interest in fighting for the rights of working women. She was convenor of the SPA women’s committee, which developed policy on the status and rights of women and helped co-ordinate actions on issues like equal pay and childcare to guide party activists in the trade union movement. She was a key activist in the WWF’s women’s committee and was, as Jim Donovan said, “loved by all its members”. Through most of the 1950s and ‘60s, annual celebrations of IWD were held at the WWF hall after the IWD march. She worked closely with the UAW National Leadership assisting in policy formulation, promotion, publicity and in significant logistical support for campaigns and events, especially IWD and May Day. One such campaign was at the height of the Cold War in 1980, entitled “For our Children’s sake, Ban the Neutron Bomb.”

The WWF Hall at the end of the Hungry Mile was adorned with a huge mural, painted over mortar on brick between the late 1940s and 1957 by Ralph Sawyer and others. It celebrated the waterside workers’ struggles, sacrifices and achievements. When the union sold the property in the 1990s, the building was set for demolition. To preserve the history of the movement, Ina oversaw the delicate and painstaking process of having the mural cut off the brick wall with a diamond tipped saw. It is now on display at the National Maritime Museum.

In 1997 Ina went to the UK to stand with the dockers of Liverpool, who had been picketing the wharves for two years. She inspired the picketers and was warmly received by the women of Liverpool. Together with then WWF Branch Secretary, Jim Donovan, she attended an international conference of dockers called to rally support for the Liverpool workers, the only woman delegate at the conference. The international solidarity action helped win the dispute.

After 41 years with the WWF/MUA, Ina retired. It didn’t last. In 1998 she came out of retirement to help with the campaign in the epic Patrick’s dispute. When that dispute was won, at the celebrations on going back to work the MUA awarded Ina Life Membership, the first and only woman to receive that honour.

Says Donovan, “Ina was incredibly able and everything she did was for the members. Her life is the history of the WWF and the MUA.”

Daren McDonald was a comrade of Ina Heidtman and a fellow member of the Socialist Party of Australia.

If you would like to submit a bio for publication, get in touch with the SEARCH Office here.