The Uluru Statement from the Heart positions this moment as: an historic opportunity to reimagine our nation.

"It is our chance to come together to deliver real change for Aboriginal and Torres Strait Islander people so they can take their rightful place in our nation."

In the words of Pat Anderson AO, Alyawarra Elder and Co-Convenor of the Uluru Constitutional Convention, “Now is our moment to act.”

The key First Nations’ issue in this election is support for the Uluru Statement from the Heart proposal for a Referendum on a constitutionally-enshrined VOICE to Parliament. The Uluru Statement has been endorsed by the majority of national and state-based First Nations organisations. A First Nations Voice enshrined in the Constitution will provide a permanent, representative, and authoritative voice that is not subject to removal by political whim.

SEARCH Foundation members are called on to make this a major focus of our election work, continuing the long tradition of socialist support for First Nations’ sovereignty, land rights and self-determination.

A decade of LNP government has seen minimal progress for First Nations peoples, despite its proclaimed commitment to Closing the Gap. The Morrison government has continued to impose the Basics Card, the Cashless Welfare Card, Stronger Futures and the super-harsh Community Development Program on First Nations peoples. It refused to endorse the constitutionally-enshrined Voice, and attempted to derail the process by consulting on a legislated option.

Labor’s Platform has been thoroughly changed through the effort of its Indigenous Caucus, led by Senators Patrick Dodson and Malarndirri McCarthy and Linda Burney MP. Labor promises to hold the referendum on the Voice to Parliament in their first term, and is committed to the entire Statement from the Heart. Labor promises to: 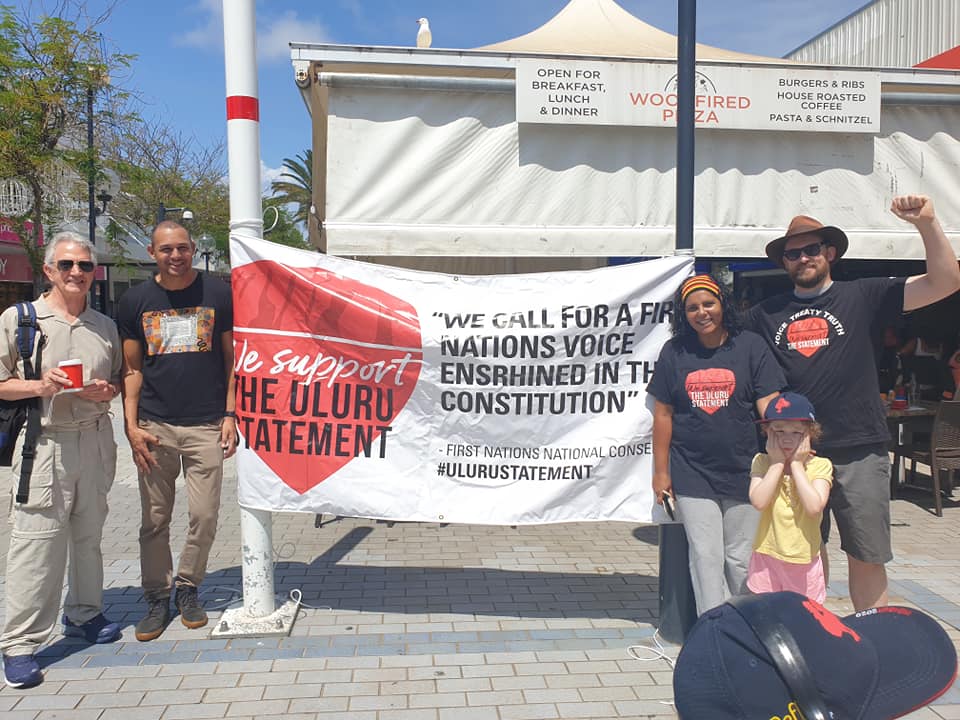 SEARCH activists campaigning for Voice Treaty Truth in Cronulla in 2020

The Greens Election Platform for Treaty and First Nations Justice prioritises Treaty and Truth, but not a constitutionally-enshrined Voice. Greens policy begins by proposing a national Truth and Justice Commission, “to lay the foundations” for developing a Treaty or Treaties with First Nations people.

Though the policy does not mention the Uluru Statement from the Heart, this echoes the Uluru Statement’s call for a Makarrata Commission ”to supervise a process of agreement-making between governments and First Nations and truth-telling about our history”.

SEARCH considers that The Greens risk jeopardising the success of the invitation made to the Australian people by First Nations people in the Uluru Statement of Voice, Treaty, Truth. The clear position of the Statement from the Heart Campaign is that the priority is for a constitutionally-enshrined Voice to Parliament to come before a Makaratta Commission is legislated, so that there is a nationally-representative body in place to advise the Parliament on this and other legislation affecting First Nations peoples.

Other elements of The Greens First Nations policy deserve support, including:

A continuing task for SEARCH members and supporters – during the election and after – is to build the alliances and relationships of trust to empower First Nations community-driven initiatives, including supporting the First Nations Workers Alliance campaign to replace the CDP with real jobs in programs managed by their communities, and supporting the growing networks of First Nations community-controlled organisations including health services, land councils, legal services, community education providers, language centres and media organisations.

But we must start with the Uluru Statement from the Heart and specifically a referendum to enshrine the Voice in the Constitution. We call on all our members and supporters to approach their local MP and all the candidates, Labor, Greens, LNP and independents, to seek their public endorsement of the proposal to hold this referendum in the next term of parliament. When this referendum is passed, as it surely will be, it will represent a permanent change and a significant shift in power. In the words of Thomas Mayor, a Torres Strait Islander man born on Larrakia country in Darwin and a SEARCH member:

A constitutionally enshrined Voice is the answer to the question of Australia’s identity – how we mature as a nation – and how we should celebrate it. By amending the Australian constitution to include First Nations voices, we will be including 60,000 years of continuous culture in what constitutes us as Australians. And further, when we have established a First Nations representative body, the Voice, Aboriginal and Torres Strait Islander people will have gained the ability to choose our own representatives, constitutionally guaranteeing us the ability to have the discussion with the Australian people, in a proper way, about when and how we should celebrate.