Inequality is a systemic feature of Australia and of similar societies and economies. Inequality is the product of the capitalist market system where wealth is transmitted through families.

ACOSS, among others, charts income and wealth inequalities in Australia and shows:

Wealth is distributed more unequally than income and almost half of all wealth is owned by the richest 10%. The total wealth of this group is nearly three times that of the ‘bottom’ 60% of the population. The three most important forms of wealth are housing, superannuation and shares and investment. The richest 10% own considerably more of these, with the ownership of shares and investments the most concentrated.

Inheritances go disproportionately to those who are wealthy. This is especially so with shares and investments. Moreover, those with higher incomes and more wealth can save and invest more and take greater advantage of tax benefits linked to superannuation, negative gearing and capital gains.

As Christopher Sheil writes in 2021

Because of the growing volume of evidence that increasing economic inequality inhibits economic growth, destroys social cohesion, undermines democracy, and exacerbates myriad social problems — including the management of COVID-19 and other health problems.

..without a sincere desire to achieve an egalitarian society, any democratic socialist movement loses its dynamic and lapses back into a directionless pragmatism.

Income and wealth inequalities are relative matters; the concern is to limit the gap between top and bottom and ensure that no one is excluded from decent living standards.

But, as Crick wrote, life expectancy should be an absolute matter to end the different rates of mortality between social classes and ensure equality of life and death.

Equality of life and death has not been achieved in Australia in the 2020s. The target to close the life expectancy gap of Aboriginal and Torres Strait Islander peoples by 2031 is not on track. The life expectancy of Aboriginal and Torres Strait Islander females born in 2015–2017 is 75.6 years compared with 83.4 years for non-Indigenous females. For males the difference is 71.6 years compared with 80.2.

In contemporary Australia, life expectancy is clearly linked to socioeconomic status. On 2017-18 data, average life expectancy in the electorate of Bradfield was 86.3 years; this was the highest of any federal electorate. Life expectancy in Lingiari, the lowest, was 10.8 years lower at 75.5 years. 84 per cent of the variation in divisional life expectancy can be explained by SES and Indigenous status. It is shown in figure 1. 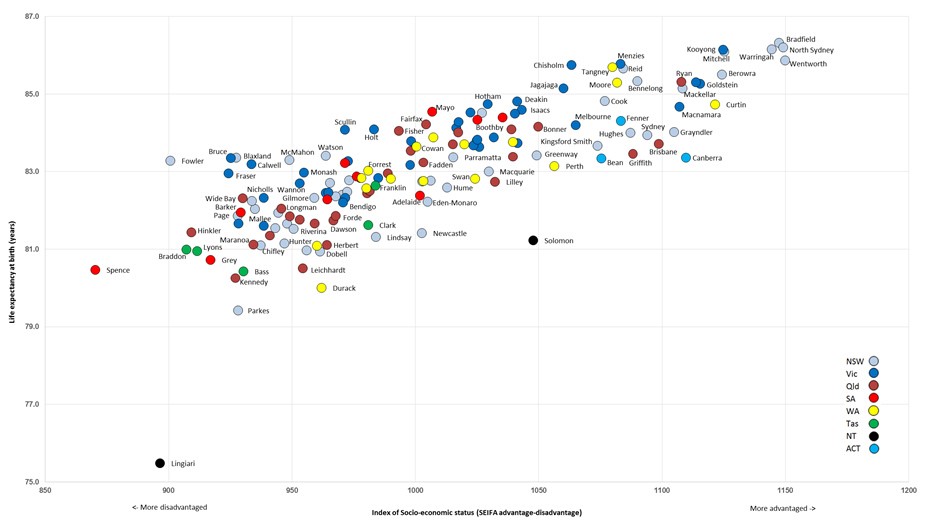