The people of Zimbabwe are in a headlong rush to national elections on Monday July 30, with 23 candidates running for the presidency and over 120 parties contesting the parliamentary seats. This is the first election since 2000 where neither Robert Mugabe (ZANU-PF) nor Morgan Tsvangirai (MDC-T) have been leading the campaigns.

Primary elections for both ZANU-PF and MDC Alliance candidates were marred by violence, cheating, and breaking of party rules. Chaos is a fair description of intra-party relations generally in Zimbabwe.

The two leading contenders for President remain the current president, Emmerson Mnangagwa, leader of ZANU-PF, and Nelson Chamisa, the leader of MDC-T. They have both presented election manifestos and campaign promises notable for extravagance and delusion. However, credible opinion polling suggests that these two will be candidates in a run-off election on September 8.

The Zimbabwe economy is at such a low, that neither candidate has anything to promise with, except their capacity to have credibility with the international community to enable a genuine economic rescue to be launched.

Mnangagwa has lost his initial popularity following his decisive move to force the resignation of Mugabe last November, mainly because the economy continues to tank, and because he has failed to shut down the widespread corruption in the government. Mnangagwa is facing strong opposition inside and outside ZANU-PF from Mugabe loyalists and others whose interests he threatens. 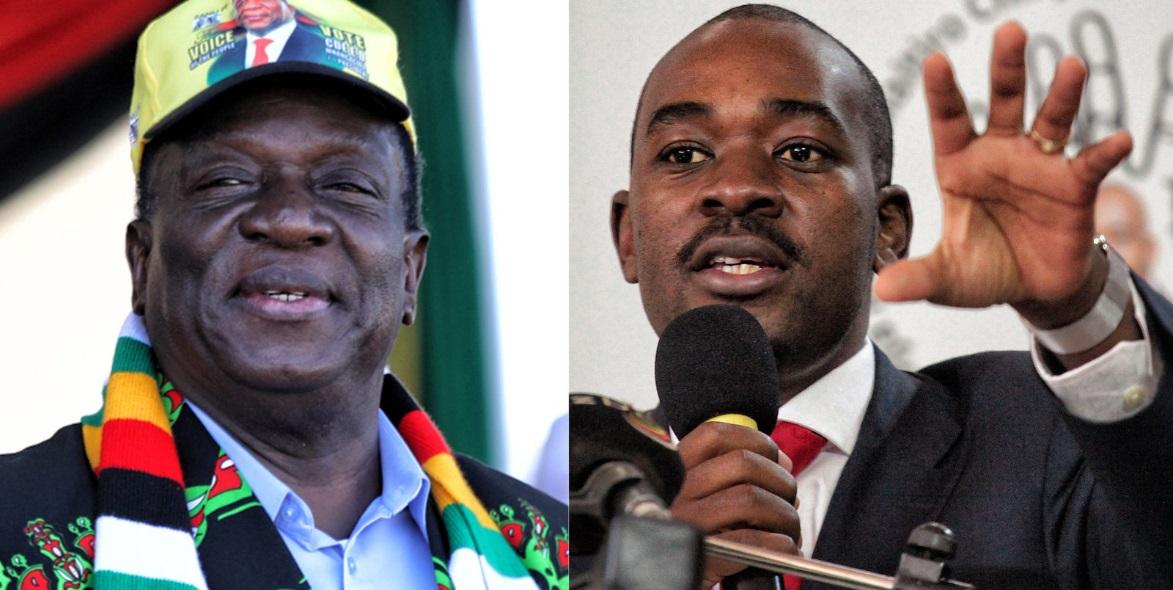 Presidential Contenders: Emmerson Mnangagwa leader of ZANU-PF (on the left) & Nelson Chamisa leader of MDC-T (on the right)

Chamisa has maintained a magic charisma attracting huge rallies, while at the same time managing to be a huge joke as a politician. As well as ridiculous promises of massive economic growth, Chamisa has been lambasted for this statement he made in the UK: “If Mnangagwa wins 5% in a free election, I will give him my sister. I have a sister who just turned 18 and looking for a husband. I’m betting on this because I know it won’t happen.” Blatant sexism has become a feature with him.

Despite all this, Chamisa is supported by more experienced opposition figures as the most likely vehicle for a post-ZANU-PF government, and thus for the best chance of change. Others see his trajectory as a continuation of ZANU-PF culture, and point to his close links with the Mugabe family through their Gushongo Dairy operation.

With political structures fractured on all sides, these elections are more likely to be the start of a transition, and the people may well fail to convince the international community that a rescue can work. The great suffering and hunger is likely to continue, until the more basic organisations of women, workers, farmers and students can create a more credible alternative.