Zelda D’Aprano was most famous for chaining herself across the doors of the Commonwealth Building in Melbourne in 1969, in protest against the limited nature of the recent decision on equal pay in the Commonwealth Arbitration Court. Over the next several decades she became an earnest and fierce, but always good-humoured, supporter of the many causes she deemed necessary to overthrow the patriarchy. She joined the CPA in 1950 at the age of 21, but left in 1971 in protest against its sexism.

Zelda worked in many jobs – as biscuit maker, usherette, seamstress, dental nurse and office worker – and was an active trade unionist. She also became a writer, peace activist, member of the Union of Australian Women, grandmother and great-grandmother.

Zelda was born in Melbourne on 24 January, 1928 to working-class migrant parents, Shimshon Orloff (later known as Sam), who had worked as a wheelwright until the coach- building industry collapsed, and Rachel Orloff, who worked in the clothing industry. Born respectively in the Ukraine and Russia, where their families suffered anti-Semitic persecution, Shimshon and Rachel were taken as children to Palestine, where they met and married. After migrating to Melbourne in 1923, they made their home in the Jewish community of Carlton, where Rachel, dismayed by the poverty and slum conditions of Melbourne's inner suburbs, joined the CPA in a bid to make the world a fairer place. As Zelda noted, her mother swapped her religion for the cause of left-wing politics.

Zelda was educated at Lee Street Primary and Brunswick Domestic Arts but, keen to relieve her parents of the burden of her upkeep, left school just before she turned 14. She soon met Charlie D'Aprano and after "a wonderful romance", as she recalled, she received her mother's permission to marry shortly after her 16th birthday. Their daughter, Leonie, was born a year later in 1945. After five years of living in cramped rented rooms, the family moved into a newish housing commission home in West Heidelberg, where Zelda formed important early
friendships and political commitments.

An enthusiast and idealist, Zelda joined the Heidelberg branch of the CPA when she was 21. Though later disillusioned, for two decades Zelda and her husband Charlie found in the Party a vital social network and a valuable historical and political education. When Leonie was young, they took it in turns to go to political meetings.

In the 1950s, Zelda qualified as a dental nurse, working at Larundel Psychiatric Hospital where she was also elected as a shop steward. She later recalled:

At the Party trade union activists’ meetings, I never spoke once. How could I? What I was doing was insignificant compared to all the wonderful things men were doing. No-one ever spoke of work being done in right-wing unions … I listened to their experiences for they knew so much and I had so much to learn. I would come away from these meetings thinking there was something wrong with my efforts or something wrong with me. I was damned if I knew how, why, or where I was wrong but my own experiences just didn’t fit into the scene that these great men talked about.

After working for 15 years in the dental clinic, Zelda was refused permanency of employment, so resigned. 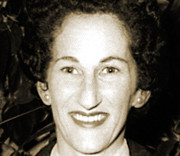 A more exciting position opened up in the office of the communist-led Australian Meat Industry Employees Union which was taking a test case for equal pay to the Arbitration Court in 1969. Attending court hearings, Zelda was appalled to find that all the key players were men, including the union advocate, R. J. Hawke, future ACTU President and Prime Minister.

I just couldn't believe this, and I thought, here are all the women, here we are, all sitting here as if we haven't got a brain in our bloody heads, as if we're incapable of speaking for ourselves on how much we think we're worth. And here are all these men arguing about how much we're worth and all men are going to make the decision.

The court granted equal pay for equal work but, as so few women did exactly the same work as men, its application was strictly limited. Frustrated and disappointed, Zelda protested by chaining herself across the entrance of the Commonwealth Building during her lunch hour to draw attention to the cause. Her action became a media event and a second chain-up soon followed, when Zelda was joined by teachers Alva Geikie and Thelma Solomon at the entrance to the Arbitration Court.

Armed with the new ideas and insights coming out of the newly emerging women's liberation movement, women activists such as Zelda began to form ‘consciousness-raising groups’ and planned action on numerous fronts to end women's treatment as exploited workers, as sex objects and victims of discrimination and violence, and more generally to overthrow the system that came to be called ‘sexism’. Zelda was conscious of being a part of a world-wide movement and was determined to change the world. 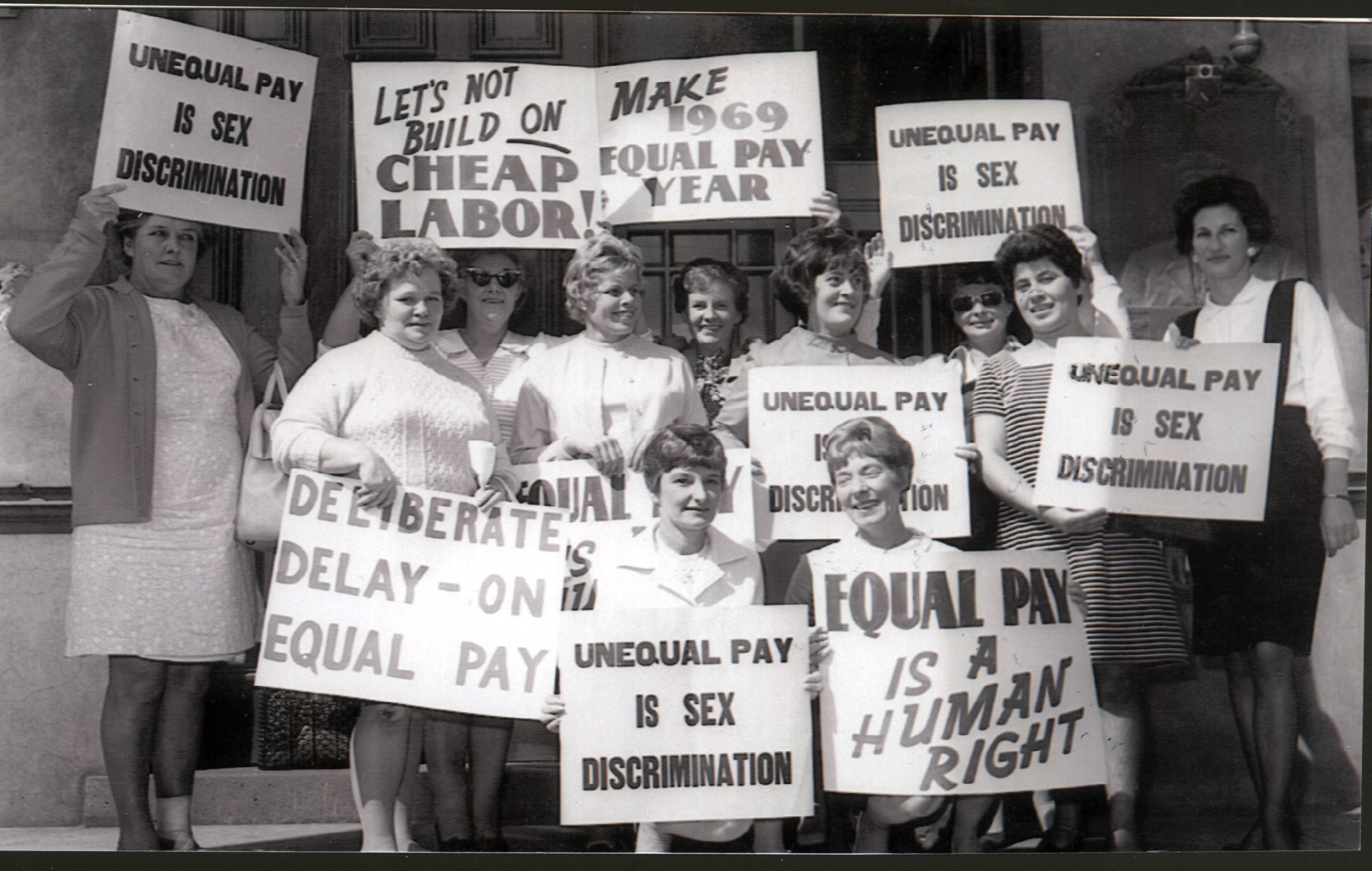 In Melbourne in August 1970, Alva, Thelma and Zelda met at Bon Hull's place to form the Women's Action Committee. Fired up by the energy of an international movement, they called on their sisters to"join the women of England and America to protest against exploitation and discrimination [against] women". They decided on their own distinctively local actions. In the Melbourne CBD, they took a tram ride and insisted on paying just 75 percent of the fare, to highlight the unfairness of women's lesser pay rates; they protested against ‘Miss Teenage’ contests and joined a national conference on women and work and ‘female conditioning’ organised by University of Melbourne students.

In 1972, as preparations began for the next Commonwealth equal pay case, Zelda joined the coordinating committee of the newly opened Women's Centre at 16 Little La Trobe Street, which became a meeting place for numerous campaigns relating to discrimination at work, discrimination against lesbians, sexist advertising, abortion law reform, rape culture, childcare and children's books. In December that year, following the Whitlam Labor government’s election, the Arbitration Court awarded women equal pay for work of equal value. Still real equal pay proved elusive for women. In 1974, the Court handed down the more significant judgment in favour of an adult minimum wage for all workers regardless of sex, thus ending the concept of the male breadwinner. Zelda recorded the history of the struggle for pay justice even as she herself campaigned as an active participant.

During the next decade Zelda was in demand as a feisty speaker at public meetings, demonstrations, marches and schools and was frequently interviewed on radio and TV. She became a media star. She also wrote about her political journey in her self-published autobiography Zelda: The Becoming of a Woman (1977), which was re-published in an expanded form by Spinifex Press in 1995 and again in 2020.

In 2001, the centenary of Australian Federation, Zelda published a second book, Kath Williams: The Unions and the Fight for Equal Pay, to record and pay tribute to the contribution of an earlier campaigner for equal pay. Women had been fighting for pay justice in Australia since the early 20th century and historically-minded Zelda was determined to educate us about their long struggle.

Zelda's life of activism was recognised in the numerous honours bestowed on her. In 1995, she received a special mention for her "Outstanding Contribution to Australian Culture" from the Director of the Centre for Australian Cultural Studies in Canberra. In 2000, Macquarie University awarded her the honorary degree of Doctor of Laws; in 2001 she was among the first 100 women admitted to the Victorian Honour Roll of Women. The Trades Hall Council introduced special awards in her name for women trade unionists. In 2004, she was made an Officer of the Order of Australia (AO) and in 2017 La Trobe University awarded her an honorary DLitt degree.

Zelda and Charlie D'Aprano had separated in 1965. With her second partner, former communist Ron Tilley, Zelda moved to New South Wales to live on a beautiful rural commune at John's River near Taree, north of Newcastle, where she became deeply attached to communal principles and country life. She only returned to live in Melbourne when her health declined over her last 10 years. Despite her illness, Zelda readily reconnected with old friends and made many new ones. And she found much joy in her growing family, now extended across four generations with the birth of Leonie's daughter and Zelda's granddaughter, Seona, and great-granddaughter, Persephone.

Zelda wanted to be remembered above all as a woman activist. Certainly, her long commitment to justice for working women, that began in the trade union movement more than 60 years before, reminds us of the key role played by working-class women in the long feminist struggle for equality and economic justice. Zelda died on 21 February, 2018.

Marilyn Lake FAHA, FASSA, DLitt, AO is Professorial Fellow in History at the University of Melbourne and the author of many books about political activism, including Getting Equal: The History of Australian Feminism (Allen and Unwin, 1999).

Lake, M., Getting Equal: The history of Australian feminism (Sydney: Allen and Unwin, 1999).