Women’s Work – The Struggles Of Women In Employment 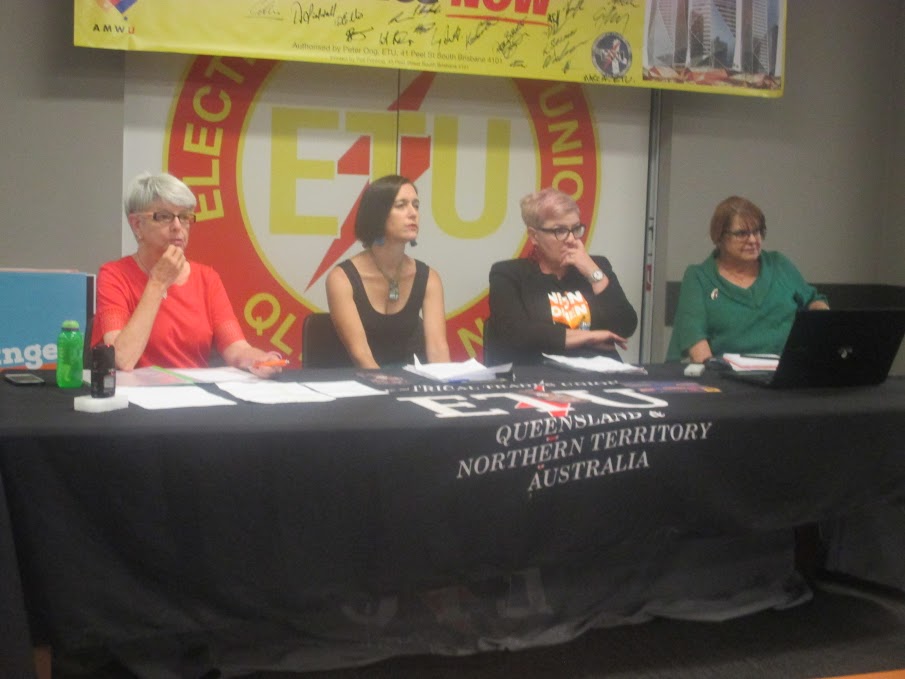 Ros McLennan spoke about the Change the Rules Campaign which she said is fundamentally about women’s equality and the need to win a living wage for 2.3 million workers, the majority of whom who are women. Women are over-represented in the low-paid hospitality, retail and pharmacy sectors where penalty rates have been cut twice. In Queensland, wage theft is rampant and happens most often where there is insecure work, young people and women. Ros also provided the sobering statistic that 23% of women experiencing domestic violence are in the workforce. Unions will continue to campaign for paid DV leave, including for casual workers.

Glenda Strachan provided an historical perspective on women’s work, noting that women have always worked but entered the paid workforce to find institutionalisation of unequal and lower wages, gender segregation of jobs, no access to some jobs and the marriage bar. The latter was only abolished in the QLD Public Service in 1969.

Linda Colley referred to the 15-18% gender pay gap, with discrimination and bias in hiring decisions being a contributing factor. There is also invisible discrimination in recruitment and selection, career progression, flexible work arrangements, and the value placed on work. Women requesting part-time work are frequently perceived as unreliable or not serious about the job.

Speaking on superannuation, Penny Spalding explained that to qualify for the Superannuation Guarantee, a worker must be 18 years old or over and earn $450 per month (or more) after tax. The outlook for many women facing retirement is grim due to following factors:

An estimated 220 000 women miss out on $125 million of super contributions as they do not meet the $450 threshold from one employer (many women work part-time, in more than one job) and the current 9.5% super guarantee does not enable most women to accrue enough savings for a comfortable retirement.

A system which leaves women with only half the super of men is not sustainable.

Government support via tax concessions is poorly targeted in terms of improving adequacy and women retire on average with just over half the super balance of men.

We heard from Imogen Barker that 33% of employed women are in insecure, casual jobs and how important it is for young workers to get proper advice about pay and entitlements. Young people are mostly in casual jobs and some don’t have time to go home between shifts. They are denied permanency so casual employment can last for years.

In discussion, people spoke about their experiences of low pay, insecure work and discrimination, including older workers who can also be trapped in insecure work. There were questions about the impact the of the Higgins and Harvester basic wage decisions. Glenda Strachan explained that they had both positive and negative impacts.  Establishing a legally enforceable minimum wage was an important win for workers generally. However, by defining the basic wage as one which allowed a man to support his family in frugal comfort, women’s right to equal pay was delayed by decades. The gender pay gap has been immovable for 30 years.

Feedback from participants was that the presentations were excellent, providing us with important historical and current information about women’s employment experience.