Steve Cooper was a member of the Communist Party of Australia and SEARCH Foundation who did important work to expose the crimes of the Pinochet junta and mobilise Australian and international support for its victims. He was a crucial member of an Australian union delegation that visited Chile in March 1974, seven months after Pinochet’s US-backed coup.

In May the people of Chile delivered a blow to their right-wing government by electing a left-leaning constitutional assembly. It will draft a new constitution to replace the one written under army general Augusto Pinochet, who overthrew Chile’s democratically elected Marxist president, Salvador Allende, in 1973. Pinochet’s political heirs suffered further defeats in May’s regional and municipal elections, which saw a communist elected as mayor of Santiago.

The result would have delighted Steve Cooper, a member of the Communist Party of Australia and SEARCH Foundation who did important work to expose the crimes of the Pinochet junta and mobilise Australian and international support for its victims. 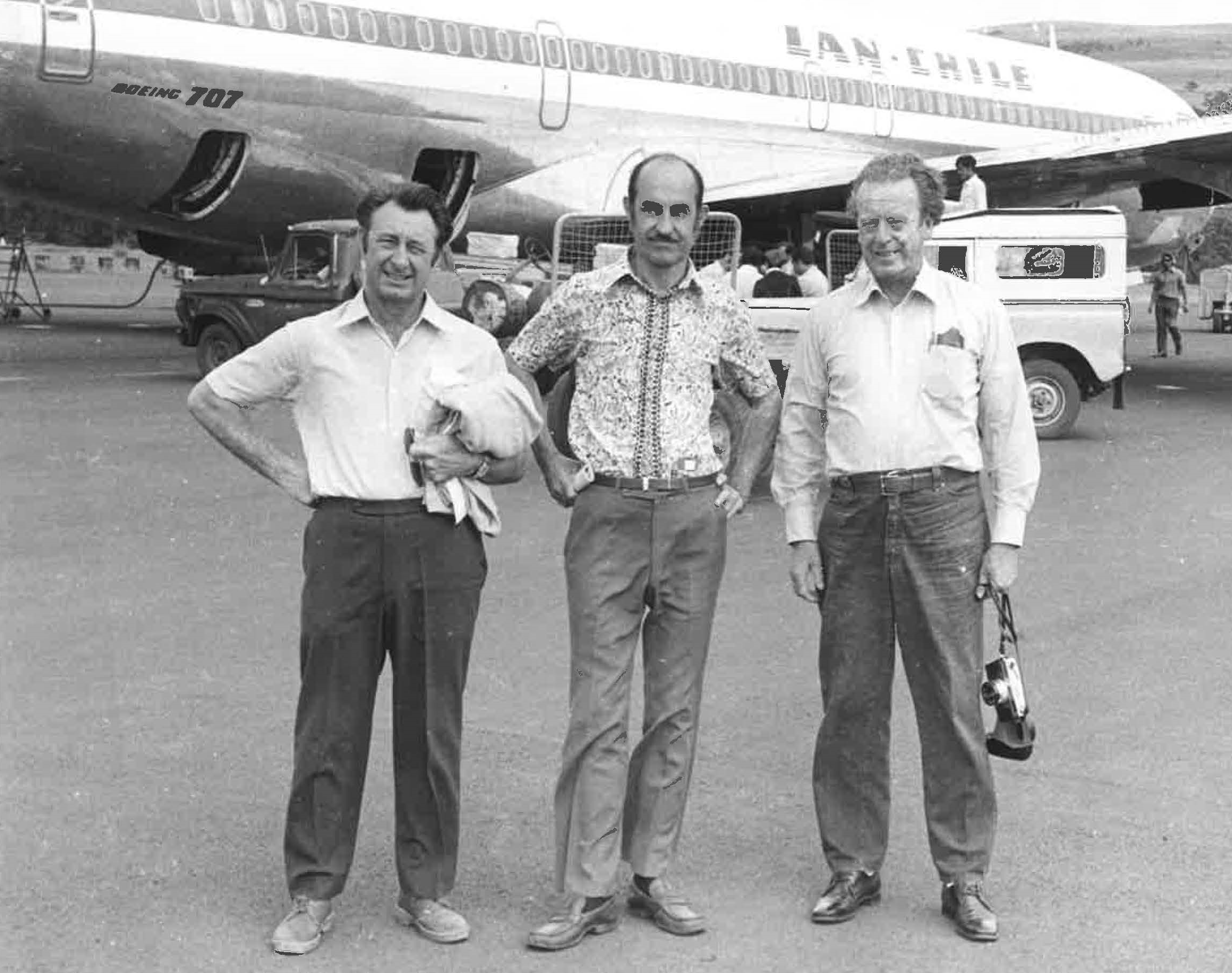 Steve died on 7 May at the age of 93. He was a crucial member of an Australian union delegation that visited Chile in March 1974, seven months after Pinochet’s US-backed coup.

The visit was made possible by an outstanding act of solidarity by Sydney airport workers who refused to service a LAN Chile aircraft. That left the plane and the airline’s president, a junta general called Stuardos, stranded on the tarmac. In return for letting the plane go, a desperate Stuardos agreed to invite the Australian union movement to send a delegation to Chile to see for itself “how much happier the people are now,” as he rather naively put it.

The delegation returned to Australia with a comprehensive account of military repression. Their findings, written mainly by Steve, contributed to worldwide condemnation and isolation of the junta and the release of prominent political prisoners. The visit did much to build a Chile solidarity movement in Australia.

Steve was born in 1928 and grew up in Sydney’s south-eastern beachside suburbs. His parents – father George, a hat-maker, and mother May, a nanny – were English immigrants from Manchester. Steve remembered George as a man left “permanently embittered and introspective” after service in World War I.

A studious boy with a fascination for history, Steve grew up in the shadow of World War 2. He recalled his Coogee primary school headmaster standing in the playground, against the backdrop of a partly built air raid shelter, to address pupils on the fall of Singapore to the Japanese army in 1942. A happier memory was getting news of the German army’s surrender at Stalingrad in 1943, which boosted popular goodwill towards the Soviet Union.

On leaving school, Steve became a pharmacy apprentice and joined the CPA, when it had active suburban branches in Sydney’s east from Vaucluse to Botany, along with factory branches with dozens of members.

In 1956, communist parties around the world were rocked by news of Nikita Khrushchev’s report to the 20th Congress of the CPSU – his  so-called secret speech denouncing the personality cult and purges of his predecessor, Joseph Stalin. Khrushchev’s co-leaders blocked publication of his report but it was read to party and workplace meetings throughout the USSR.

Steve, a self-effacing man who disliked talking about himself, was uncomfortable with the elevation of any individual over the collective. He had read widely on the Soviet Union and was not entirely surprised when Khrushchev’s revelations reached Australia.

He later said he was more disillusioned with what he regarded as the CPA leadership’s attempts to stifle discussion of the issue, which contributed to him leaving the party for a time. Despite a stint in the Labor Party, which he described as “like being on milk and water”, he never shed his ideology and principles.

Steve travelled extensively overseas, including three months in Allende’s Chile, where he witnessed the punishing impact of US sanctions and other measures aimed at sabotaging the Popular Unity government’s socialist reforms.

His travels added to his theoretical understanding of imperialism; he had the knowledge, experience and empathy to recognise Western “humanitarian intervention” as a cloak for self-serving regime-change operations in countries such as Libya.

In “No Truck with the Chilean Junta!”, a study of Australian and British union solidarity with Chilean workers after the coup, author Ann Jones quoted Chilean trade unionist Luis Figueroa as saying that news of the Sydney airport ban “swept through Chile and from that moment, lives began to be saved in Chile.” Without the Australian union action, “It is possible that we may not be alive,” he added.

Jones identified Steve as the first person to suggest the possibility of leveraging the aircraft ban to mount a union fact-finding mission to Chile. The Australian delegation included AMWU officials and CPA members Jim Baird and Henry McCarthy, Brian McMahon of the Transport Workers Union, Ron Masterson of the Plumbers Union, interpreter Carmen Bull, and Steve, a rank-and-file member of the Miscellaneous Workers Union, which made him its representative. They went to Chile with the endorsement of both the International Confederation of Free Trade Unions and its rival, the World Federation of Trade Unions.

The delegation secured guarantees from the junta that it would have access to prisons and there would be no reprisals against anyone they interviewed, including jailed trade unionists and former members of Allende’s government.

Steve’s first-hand knowledge of Chile proved invaluable.  He was able to revisit workplaces and communities and compare their circumstances to those of a year before. At one factory, Steve discovered that about a third of the workforce had been sacked and workers he had previously met had been killed. At a metalworking shop, Steve observed that there were several newly appointed ‘union representatives’, and only one of the old union committee he had met previously. Another factory had been under workers’ control when Steve visited in 1973. When the coup took place, the army attacked and killed many workers. Steve found that none of the workers he had met remained at the factory when he returned in 1974.

The delegation visited a shantytown where Steve had been welcomed a year earlier. He told Ann Jones: “I walked on into the settlement and asked a worker about Sergio, Vincente and the twelve others I knew, and he told me they had all been shot. It just felt like the end of everything.”

Steve and other delegation members had secret meetings with members of banned trade unions and the underground resistance. “The men sitting across from Cooper shared some of the shocking and painful stories of the terror of life under the dictatorship,” Jones wrote. “Workers had been executed in their workplaces and military personnel killed families and burnt houses if their search for arms was resisted. The men said ‘there was a lot of torture. At the national stadium some ... were shot. They pulled out fingernails. They castrated men. They violated and raped women and pushed pisco bottles into their vaginas.’”

On returning home, the delegates took part in meetings across Australia which reached thousands of people and generated media publicity. They produced a newspaper, distributed internationally in seven languages, which outlined the delegation’s activities and findings and relayed messages from Chilean trade unionists. They lobbied the Whitlam Labor government, which subsequently refused LAN Chile landing rights in Australia. The New Zealand government followed suit. You can see photos from the trade union mission and Chile solidarity campaign by clicking here.

The delegation reported that strikes were treated as treason, union elections were banned, all union meetings had to be attended by a representative of the military, and any real union work was carried out underground at the risk of detention or death. There were more than 40 concentration camps in Chile, the delegation established. These findings contributed to Chile’s expulsion from the International Labor Organisation.

Steve worked at a variety of jobs, including several years as a wharfie. In the 1970s he became a research officer for the AMWU, where, among other roles, he helped to research and analyse wage rates paid across hundreds of dissimilar workshops in the metal industry.

This work set standards of measurement and analysis ahead of those of the Conciliation and Arbitration Commission and also of the employers, said former AMWU organiser Don Sutherland. “The AMWU used Steve’s data and analysis in their appearances in the commission to win higher wage rates across the metal industry,” Don said. “(AMWU leader) Laurie Carmichael praised Steve’s dedication and the quality of his work and said he was one of the finest people he’d ever worked with.”

After retiring from the AMWU, Steve studied and wrote on areas of communist history as diverse as the pre-war CPA’s attitude to the Labor Party and the influence of Lenin’s 1922 New Economic Policy on contemporary Chinese socialism. He researched the fate of 154 lesser known CPSU cadres in the purges of the 1930s (including many who perished and others who emerged unscathed) and recorded his findings in handwritten notebooks. He never used a typewriter, let alone a computer, and his penmanship left no white space – a habit formed when paper was scarce.

He had a dependable memory and wrote long, absorbing letters on complex subjects until shortly before his death. With Steve there was no such thing as idle chat; make a casual remark on, say, Chinese state-owned enterprises and you risked receiving a substantial paraphrase of the three-volume selected works of Deng Xiaoping.

Before meeting his long-time friend and companion Judith Charles, Steve was married twice, to Lois and Patricia, both of whom died tragically. He spent the last two years of his life in a nursing home at Bonnells Bay on the NSW Central Coast.

Steve's ashes will be scattered at a ceremony in Sydney at noon on Monday 21 June, in the Biddigal Reserve, off Ramsgate Avenue at the northern end of Bondi beach, near the children's pool.  Meet at one of the covered picnic tables.