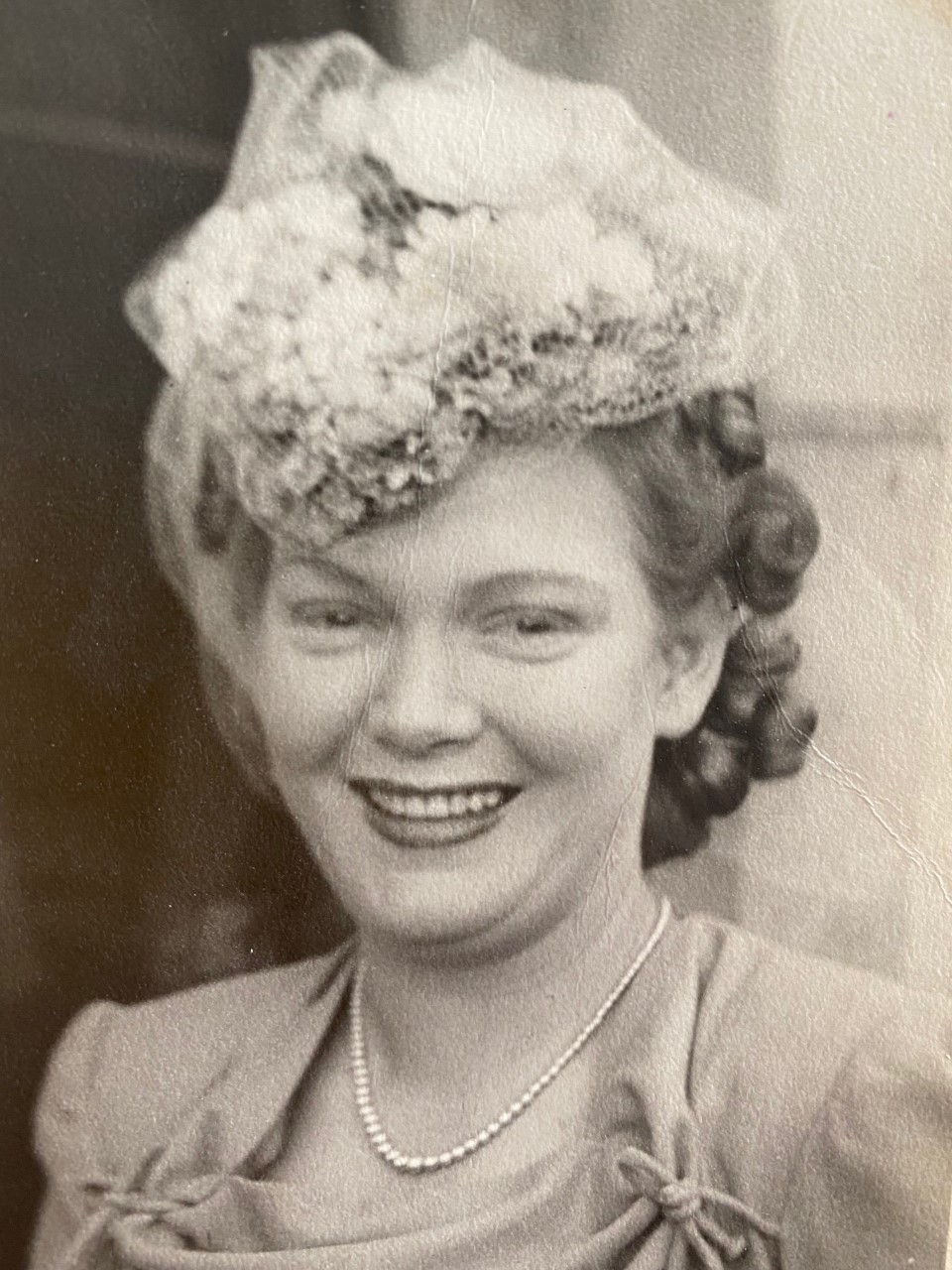 Born Ada Moffatt, Peg Hewett 94 passed away peacefully at Royal Prince Alfred Hospital Sydney, on 17 November 2021. Peg was born on 2 February 1927 in Mackay District Hospital, North Queensland, the sixth child to parents Alfred & Mary Moffatt, a loving working class family. Peg's mother was a school cleaner and her father worked on the Mackay wharves, part of the precarious ‘bull’ system where each day wharfies would sit around the radio hoping for their number to be announced so they could get a day's work. Peg left school when she was 13 after her father died in a bicycle accident leaving her mother unable to send her to high school.  As Peg remembered it their household was a ‘… pretty happy-go-lucky poverty stricken place’.  Peg loved school, excelling at singing, acting and extravagant performances.

During WWII Peg worked in a doctor's surgery and various retail outlets to help with family finances. In 1945 she met local socialist Eddy Barker marrying him later that year, with Peg later reflecting ‘such innocence, it lasted 3 years’. Barker introduced Peg to socialist ideals of equality, political activism and social justice. He was a supporter of Fred Paterson, the only member of the Communist Party of Australia elected to parliament in Australia's history. Taking office in 1944, Paterson was the state member for Bowen, Queensland and advocated for increased funds for education, social welfare and post-war reconstruction. Although a lawyer by profession, as a politician he remained active in union and workers campaigns. Peg and Eddy were at a demonstration in Brisbane on 17 March 1948 and witnessed a policeman bash Paterson from behind for defending a demonstrating worker. Paterson was hospitalised for several weeks with Labor Leader Bill Hayden later naming the basher as Sergeant Jack Mahony who during Hayden's time as a police officer boasted about using a pick handle on ’… the commie Fred Paterson’ . This experience of violence against working people stuck with Peg for the rest of her life.

Peg moved to Sydney after the war staying with older sister Margaret (Mais) at McMahons Point where she got a job and discovered dancing, and the local night life. She joined the Eureka Youth League, a socialist youth organisation, revelling in the left-wing politics and social justice campaigns while dancing the nights away. Peg often broke into songs with a peace message at fundraising functions and entertained many friends with her infectious humour.

It was through the EYL that Peg met Roy Hewett, who also shared a love of dancing and socialist politics. They moved in together after Roy returned from the 1951 World Youth and Students Festival in East Berlin and in 1953 their first daughter Robyn was born. Life was difficult in the 1950’s with widespread housing shortages so they lived in public housing settlements at Hearn Bay and later a small house at Yagoona, balancing life, child rearing and political activities in the union and peace movements. Their second daughter Karla was born in 1964.

The sixties was a time of widespread social change with post-war decolonisation, peace campaigns, anti racism and feminist movements part of the mix. In the 70’s Peg was swept up in the feminist movement, the anti-Apartheid movement and the campaign against Australia's involvement in the Vietnam war, attending demonstrations and helping organise street theatre groups to write and perform campaign songs. It was also a period of intense change for Peg and Roy who decided to go their own ways. Friends invited Peg and Karla to join a left commune where Peg's creative talents grew, helping write and perform for International Women's Day events and establishing the Women's Action Theatre group. Her daughter Karla remembers this as a hectic period with meetings and activities at Women's Liberation House, the Rape Crisis Centre, CPA meetings, May Day marches and IWD celebrations. Women's inequality and right to better working conditions and maternity payments for working women were the focus of Peg's involvement. Always aware of the need for collective action, Peg became a clerk's union delegate at the NSW Teachers Health Society from 1976 to 1985, leading successful campaigns for improved wages and conditions.

In 1987 Peg retired and joined the recently established advocacy group, the Older Women's Network. Peg became deeply involved in OWN activities but wanted to take the message of older women’s issues public through song and performance. And she wanted to do something about the invisibility of older women's lives. In 1988 she led a troupe of women to an uninvited ‘lawn' performance outside Old Parliament House, Canberra, funded by a Bicentennial grant through the Women's Weekly that was ‘...imaginative fun and unusual’. They delighted the street audience so much that they later went on to win an Australian Bicentennial Centenary Award.

This success inspired Peg, along with Joy Ross and Lucie Porter to established the OWN Theatre Group. Peg believed that humour and song could be a medium for conveying the political message and for expressing sometimes deeply suppressed views. The Theatre Group enlightened and changed practices and policies for older women while entertaining audiences through self written satirical verse, often targeting politicians and bureaucrats. The Theatre Group produced hundreds of shows and performed in community halls and clubs in cities and regional towns.

In 1995 well before the recent Royal Commission into banks and the finance sector, OWN joined the campaign against excessive banking fees at the National Day of Action rally in Sydney where Peg sang through a megaphone 'The Banks Are Made of Marble’ with the refrain ‘..and the vaults are stuffed with silver that the workers sweated for’, receiving thunderous audience applause. The message was well and truly received as Peter Kell, in Consumer Choice, later noted ’the NDA alerted politicians and bank management to the level of dissatisfaction in the community over bank practices and accessibility, especially for older people’.

Peg found a niche in performance, always feeling capable, talented and strong when expressing her views through political song and stage performances. She cajoled, coached and encouraged older women, some who had never performed in their lives, to deliver their stories and messages from the stage empowering many women, young and old alike ‘... to take to the stage and tell it like it is’.

A Bulletin journalist in 1995 described these women as ‘…a new breed of older people, feisty, opinionated retirees like Peg Hewett, who anchors a trailblazing cabaret routine under the auspices of OWN (but) behind the glasses and the wrinkles is a bad girl’.

Peg retired from active performances in 2004 but a book 'Centre Stage - Celebrating the Rise and the Rise of the OWN Theatre Group' by Dorothy Cora describes the history and contribution by Peg as its founder. (This book can be downloaded from the OWN website).

But perhaps the richness of Peg's personality, creativity and wittiness is best described in her own words. When seeking new members for the Theatre Group she wrote an ‘enticing' advertisement for the OWN Newsletter that said:

'All you need is commitment, a sense of humour, a willingness to have fun and a secret desire to be centre stage. It won't hurt if you can sing, act, write scripts, use a computer, look after props, drive a car or play an instrument. You will have to put up with audience appreciation, public acclaim, lots of pleasure and an increase in self esteem. Your training will include weekly rehearsals, public performances and periodic workshops on voice, movement, microphone techniques and stagecraft. Don't resist! Call Peggy Hewett now’.

Peg's life was a rich tapestry, leaving friends and family the better for having known and loved her. She leaves fond memories, so every time you hear a bird sing, think of Peggy Hewett.

Peg was a member of OWN and the SEARCH Foundation so friends and family may wish to remember Peg by donating to SEARCH (see search.org.au) or the Older Women's Network (see ownnsw.org.au).