We are all aware of the biased reporting in the Australian mainstream corporate media of domestic news. The Murdoch media is by far the worst. It is so bad that many Australians factor it in when reading their over-the- top stories which show little distinction between news and far right-wing opinion and propaganda.

I would argue that it is in the area of international affairs that we are being badly let down by our media outlets, even the more progressive ones like The Saturday Paper.

Australian news organisations tend to take their cues from their counterparts abroad, especially in the US and UK. Let me cite a few examples.

One would get the impression reading the Australian media that Hong Kong is the main place in the world where mass protests against an authoritarian regime are taking place. I don't suggest these protests are not legitimate, but note the sympathetic coverage given here to Hong Kong protesters destroying public assets and property in Hong Kong compared with the limited coverage given to protests in other countries where the protests are directed against authoritarian right-wing and neoliberal policies and regimes.

Maybe the fact that the US Government is using the Hong Kong situation and the Chinese Government's heavy-handed handling of it as an excuse to ramp up militarist responses to Beijing, has something to do with the mainstream coverage.

On the other hand, protests against neoliberal policies and authoritarian governments are breaking out all over the world and scarcely rate a mention in the Australian media. There have been massive strikes and demonstrations in Chile, Ecuador, Brazil, Lebanon, France, Iraq, Catalonia and Pakistan. There has been a fascist coup in Bolivia, never described as such. 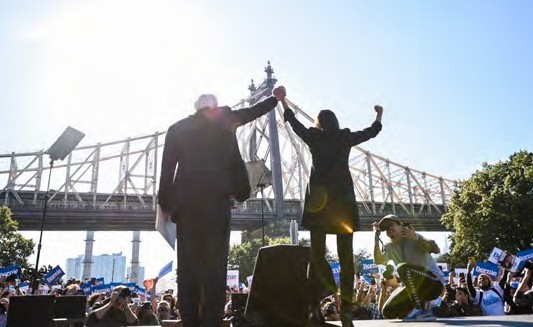 Then there's the coverage of the US presidential primaries. There's a US mainstream media blackout of the insurgent Bernie Sanders campaign. Bernie Sanders has over four million people donating to his campaign – never reported here. The US media dismisses Sanders as far-left even though many of his promises are in line with what we already have in Australia. They are exceedingly popular in the US, giving the lie to the common narrative that the US population is very conservative. The idea of democratic socialism is gaining astounding levels of support in the US, especially among young people. None of this gets reported here.

Australian media outlets just regurgitate the US establishment talking points. Washington correspondents get caught up in the US corporate media establishment bubble. Rarely do they venture out to conduct their own independent research and study the extensive progressive alternative media outlets to better inform their reporting.

Even The Saturday Paper which publishes excellent investigative and well-researched stories on Australian politics, falls down on international stories. Its main expert has strong connections to the Australian foreign policy establishment and rarely challenges establishment narratives.

Left and progressive people seeking alternative views on international events need to turn to some excellent online outlets. They'll quickly realise how inadequate our mainstream media is when reporting and analysing things going on in the rest of the world.

The Useful Idiots The Grayzone