Equally important, how should a genuine socialist formation be thinking about and acting on its strategy for the period of that government?   That strategy will in part be shaped by the extent to which a new government tackles the principle problems facing the majority in the capitalist society that we live in. Two of the most important of these are inequality and climate change with its associated environmental destruction, and sitting behind that the escalation of geo-political conflict. In the Australian context, a rapid pathway towards First Nations control of their liberation is essential.

Failing this, the threat is this: the reproduction of the electoral cycle will continue, in which each major party takes its electoral turn to govern for one or two terms, maybe 3; each taking its turn to enable no significant breakthrough in the standard of living and quality of life for all living things. For the majority that would be a disaster.

Thus, how to prepare for a new ALP government as a strategic issue is serious business for anyone to the left of the ALP and the Greens, those who are members of those 2 parties, and those who are not. Before looking at what that might involve, it’s worth discussing where the ALP is. 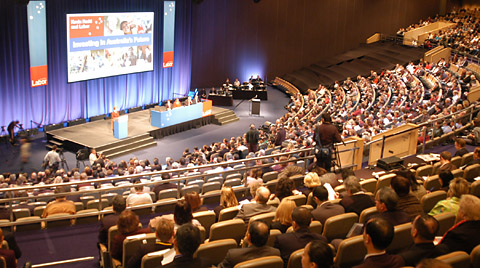 The ALP’s pragmatism is “idealism” in practice

So far, except for tax policy, the parliamentary ALP has been extremely cautious and conservative. They haven’t been forthright about the Uluru Statement, right to strike, industry bargaining, Newstart increases, Adani and climate change, and, refugees. They have relented slightly on trade policy and some easier fruit in industrial relations. But the dominant objective has been “the least ‘controversy’ the better”.

They believe that any hint of controversy feeds into the fear campaign that is (and will be) one of the two principle elements of the strategy pursued by the LNP and its key supporters (employer organisations). For example, in industrial law, they will preference more power to the FWC and the FWO than to workers and their unions.

Worse still, as revealed by their capitulation on encryption laws, the ALP does not believe in its own ability to defeat a “fear campaign” except through a conservative and cautious, highly compromised programme. Perversely, they are probably right.

But these compromises will not stop a fear campaign from the right nor address the severity of the twin crises. It is actually naive and idealistic, in the name of being pragmatic.

Not just a new Labor government, but also an economic crisis

Make no mistake, on top of the escalating climate crisis, another economic crisis will soon impact on a prospective new government’s programme.

There is no sign that the ALP would handle the situation with other than the most minimal “Keynesian-style” programme. To think they can represent the majority at the same time as going for government surplus in the name of “responsibility” is naive and idealistic. The grass roots demand to not adhere to this line is quite weak, even though the instinct for something better is strong.

There is no general sense that the ALP, as a whole, is willing or able to prepare and explain a more fundamental turn away from neoliberalism, and its neolaboral sibling.

How does the “left to the left of the ALP and the Greens” handle this?

For those of us who are active as socialists, in the ALP or the Greens, or elsewhere, it is also our problem. ‘Complaining’ might be necessary but is inadequate.

At the moment “parliamentarism” rules, including inside the various movements. Most campaigns are directed towards a parliamentary solution of some sort. Change the Rules campaign (CtR) is now an electoral campaign. There is no industrial strategy, except to support where possible workers who are fighting within the terrain of the broken rules.

Our biggest strength and starting point is the several significant “grass roots driven” campaigns that are difficult for all of the main parties to “manage”. This is because there is a long list of broken rules: workers’ rights, banking, tax avoidance, refugee and other human rights, privatised health, social security, and penal systems, climate and environmental management, education inequality, the social wage.

So we have CtR, the various manifestations of climate change and environment action, the Uluru Statement, refugee solidarity, and the growing Anti-Poverty networks that are focussed on Newstart and public (social) housing.

And, still untapped by the left, potential for a better democracy (with socialist characteristics) in the widespread and justified dissatisfaction with ‘our’ parliamentary democracy. We should see the far right gains on this as an embarrassment to ourselves.

Most of these campaigns operate mainly in silos of their own design. Nevertheless, within the silos, there are programmes and sets of demands that are the ingredients for a coherent Peoples Economic and Political Programme (for want a better expression, PEPD).

What will be critical for the 90% is the emergence of a more coherent socio-political movement - a movement of movements so to speak - that expresses a programme as theirs, protects the bits of the ALP (/ Greens) government programme that matches their proposals, marginalises the LNP, and pushes towards a more leftist second term of government … and then another after that.

Right now there is nothing in place that can create that possibility, except arguably, the “Victorian Socialists”.

The employers’ organisations are also preparing for the new government, while at the same time trying to make sure it is not necessary (from their point of view). Their problem is dialectical (as it is for us) and born out of their system: an economic crisis will damage many of them and at the same time provide space for a government to solve it in their interests.

They were successful when they faced this situation in 2007. And Labor then, as it is now, was highly receptive to them. They are preparing and already beginning to shape how Labor governs to their interests. (For example, read this.)

SEARCH’s role in this situation

SEARCH, arising from its history and its programme, has the potential to create momentum towards a cohering of the movements. Time passing limits that potential.

Basically, SEARCH is on the cusp of being able to take on this task effectively, or not. If SEARCH does not do it soon, it won’t in the medium and longer term. There has to be a sense of urgency in our commitment to it, along with patience for the response.

Most activists in our movements show poor understanding of Australia’s political economy, especially how it drives the destructive dynamic that produces climate change and inequality at the same time.

To some extent the small socialist parties do what they can to explain the exploitative dynamics of 21st century capitalism.

SEARCH must do more education work more powerfully that is based on marxian insights. We have fallen short of the opportunities available. Modern internet technologies offer rich opportunities to catch up quickly, including how we renew Australian Options.

For example, we could initiate the development of a policy programme that in the process of its drafting brings together the key organisations and groups that are campaigning. I have argued before that how the ANC developed the Freedom Charter is an excellent model to use, although we should not copy it exactly. The principles are what’s critical, especially the synthesis of policy and strategy at its core, and the escalation of the 90 per cent as a force that can direct its future.

Our education work must aim to create activists who are not “obedient” , “dutiful” participants in activities defined by the “leaders”. Instead they become protagonists who seek new learnings about how the system works, how their campaigns relate to others, how movements critique and protect a positive government at the same time, how to deal with opponents and those who wish to go backwards, and how “moments in human history” become new moments in which more people are more engaged in determining their future.

SEARCH must, to make its distinctive contribution, resist the temptation to reproduce or endorse Keynesian, laboral and institutional prescriptions or, at least when we do so, to name them for what they are and explain why they are inadequate. Marxian perspectives are credible, especially when they unleash the potential of the 90% to govern their future. There are things called the “rate of exploitation” and “profitability”, and they do explain inequality better than “greed”. “Neoliberal” capitalism was born out of “keynesianism”. Crises do occur but not because of “animal instincts”. Democracy can go beyond parliamentarism. Various forms of democratic public ownership are better than private ownership, especially reversing the destruction of climate change and inequality, dealing with the threat of repeated and deepening crisis and international conflict.

And, we must say that we are against the Australian political cycle because it is destructive of the future and therefore we wish to contribute to a movement that breaks out of it.