Pat Geraghty was Federal Secretary of the Seamen’s Union of Australia (SUA). He joined the CPA as a young man and in 1971 the Socialist Party of Australia (SPA).

Pat Geraghty was my first boss when I started out in the trade union movement nearly 40 years ago. He was a man of the highest integrity, a tireless worker, and a man with a gentle but determined nature who encouraged and taught young activists like me. He embodied the finest traditions of the working-class movement, and was a highly respected trade unionist, outstanding internationalist and a proud communist who was deeply committed to building a world free from injustice, want and war.

Pat (Patrick) Geraghty began life in difficult times in the inner suburbs of Sydney. He was born into a Catholic working-class family in 1928, on the eve of the Great Depression. His father had returned from World War I, like many thousands of diggers, with tuberculosis, He died when Pat was 10 years old. Pat grew up in Balmain's waterfront community and was schooled by the Christian Brothers. His demonstrated gift for mathematics won him a scholarship to study accountancy but served him less well when he indulged his fondness for betting on the horses.

He shipped out as a deck boy in 1947 and joined the Seamen’s Union of Australia (SUA). Like many seamen in the post-war years, Pat worked on many British and Scandinavian flagged ships. He was not quite 20 when he won his first confrontation with the skipper of a British ship. Up on the hatch cover, with the rest of the crew around him, he calmly picked 97 maggots one by one from food served to the crew before the skipper admitted there was something wrong with it. At sea he saw the effects on seafarers of an industry characterised by casual opportunity, lack of training, long periods of time at sea and no repatriation home. He also saw injustice in many of the ports he visited. But he also saw what could be achieved with the power of solidarity.

In 1961-62 Geraghty was appointed federal returning officer for the SUA elections and also organised the first Committee of Management Representatives conference, an initiative to more closely involve the union’s rank and file in the development of union policy. In 1967 he was elected SUA Assistant Federal Secretary and deputy to seafaring legend, E.V. Elliott, whom he succeeded in 1979. Rowan Cahill observes that this was an “important partnership where the past and the future met”.

Cahill writes that Geraghty established a reputation as an intuitive and highly capable industrial advocate and tactician. Together with Elliott, Geraghty transformed the lives of ordinary seafarers - winning for them for the first time a guaranteed annual wage, severance pay, long service leave, and a rotating leave system which gave seafarers regular time off. Winning these improved conditions of employment enabled seafarers to live more regular lives, obtain loans to purchase homes, and spend time with their families. As the husband of Tess and father of Mathew, Christopher and Brian, Geraghty knew well the strain on families from seafarers being away from home for long stretches. On the evening of his retirement in 1991, attended by representatives from across the breadth of the labour movement including Prime Minister Bob Hawke, ACTU Secretary Bill Kelty said that Pat Geraghty was a “trade union hero” and noted that he had been a trail blazer on issues like vocational training for workers and winning occupational superannuation.

Geraghty was a committed communist, internationalist and friend of the socialist societies and numerous national liberation movements. He joined the Communist Party of Australia (CPA) as a young man. In 1971 a large minority of party members including many trade union activists left the CPA and helped form the Socialist Party of Australia (SPA). Elliott, Geraghty and many seafarers were part of this exodus. Elliott and Geraghty were elected to the SPA’s central committee. The CPA spilt was the consequence of major differences over international and national policy and the political and industrial strategy that was right for Australia.

By 1983, however, major differences had also surfaced in the SPA. The party’s trade union base, led by prominent officials like Geraghty and Pat Clancy of the Building Workers Industrial Union (BWIU), resigned or were expelled. At the time Geraghty remarked that he felt an overwhelmingly sense of déjà vu. He felt that in both the CPA (during the early 1970s) and the SPA (during the early 1980s) the party functionaries had turned on their trade union base because they perceived its leaders were not being “revolutionary enough” and were a handbrake on the parties’ more radical agenda and search for ways to effect change. From the viewpoint of Geraghty and many like-minded trade union leaders who were party members, as union officials they were accountable to their members and it was the place of the party to suggest but not prescribe the policies and tactics they pursued. Geraghty was constantly seeking to develop the political understanding of young seafarers and organised many Marxist schools, which a seafarer once described as the “university of the working class”.

Geraghty was a leader of seafarers on the world stage. He held high profile positions in the International Transport Workers’ Federation and the World Federation of Trade Unions and served on the Joint Maritime Commission of the International Labour Organisation. A major focus of his international work was campaigning against Flag of Convenience shipping that often contravenes international safety standards and erodes hard won working conditions.

Geraghty was a prominent figure in the struggles against apartheid, Pinochet’s military junta in Chile, and the Indonesian invasion of East Timor. The maritime unions – particularly the Seamen’s Union of Australia – had always been in the forefront of the Australian trade union movement’s solidarity action with the African National Congress (ANC). Eddie Funde, the first ANC representative to Australia, recalled that: “When I arrived in Australia to establish an ANC Mission, it was the material assistance of the BWIU led by Pat Clancy and the SUA led by Pat Geraghty that made it possible for me to start to mobilise the Australian community to fight apartheid”.

Trade and shipping boycotts were a potent form of action, and maritime and waterfront unions took action time and time again despite frequent attempts by Australian stevedores to have injunctions imposed by the courts to stop the bans on moving cargo. Geraghty was in the vanguard of such industrial action both in Australia and internationally. The UN-sponsored oil embargo was vetoed by the United States, United Kingdom and France when it came before the Security Council, preventing it from becoming mandatory and stifling its effectiveness. Geraghty worked tirelessly with maritime unions around the world – especially the Danish and British unions – to prevent oil getting through. In 1985 an international alliance called Maritime Unions Against Apartheid was formed with Geraghty amongst its key leaders. In October that year, trade unionists travelled to London from the four corners of the globe to meet ANC President Oliver Tambo and plan tactics to disrupt the flow of oil to the regime. After his release from prison, Nelson Mandela told Geraghty that during his many years in jail he knew about the maritime unions’ actions and that it gave a great boost to the morale of the ANC prisoners. 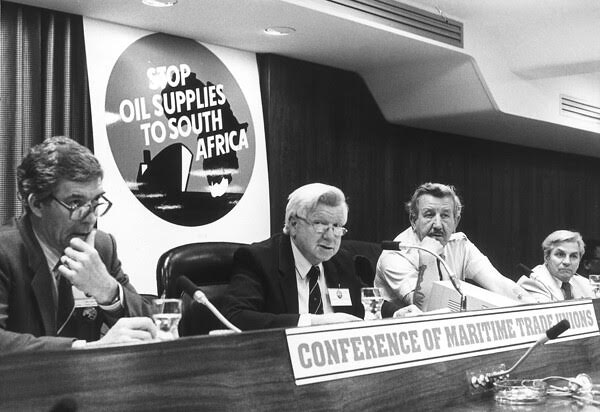 Pat Geraghty (2nd from L) at Conference of Maritime Unions

Geraghty passed away in 2016 at the age of 87 from heart complications. The Sydney Trades Hall overflowed as over 500 mourners gathered for his funeral. Among the mourners was John Coates, President of the Australian Olympic Committee. He recalled Geraghty’s support for the Olympic movement over many decades, including the tremendous assistance maritime workers gave the AOC which enabled young Australian athletes to compete in the 1980 Moscow Olympics despite the West’s boycott.

Pat Geraghty was of a tradition and generation that shaped Australia. He stands tall as an outstanding trade unionist and internationalist, and an example of the calibre of leadership that the Communist Party and the Australian working class produced. Rowan Cahill notes Geraghty’s modesty and reluctance to accept the accolades bestowed on him, observing that he saw himself as “part of a team, as one who fronted for the collective efforts of many people. This was very much a seafarer’s attitude; a well-found ship, after all, is only as good as its crew.” In 1992 Pat Geraghty was made a Member of the Order of Australia (AM) for his services to the SUA.

Cahill, R., “A note on the career of Patrick Geraghty” in Hummer, journal of the Sydney Branch of the Australian Society for the Study of Labour  History; see https://asslh.org.au/hummer/no-33/geraghty/