Pat Clancy was a leading official of the Building Workers’ Industrial Union (BWIU) for over 40 years. He was a member of the CPA from 1943 until his resignation in 1971, after which he became president of the Socialist Party of Australia (SPA).

Pat (Patrick) Clancy was the “soul of the BWIU and the conscience of the Left” (see footnote 1). He spoke in quiet measured tones but commanded huge respect across the labour movement and had godfather status within the Left.

Clancy died from a heart attack at 30,000 ft while returning home to Australia from an international peace conference in Mongolia. Audrey McDonald was with “Moscow’s favourite Australian” before that fateful flight (see footnote 2). She remembers sitting with him enjoying a sunny Moscow morning, discussing the achievements and shortcomings of Soviet socialism. 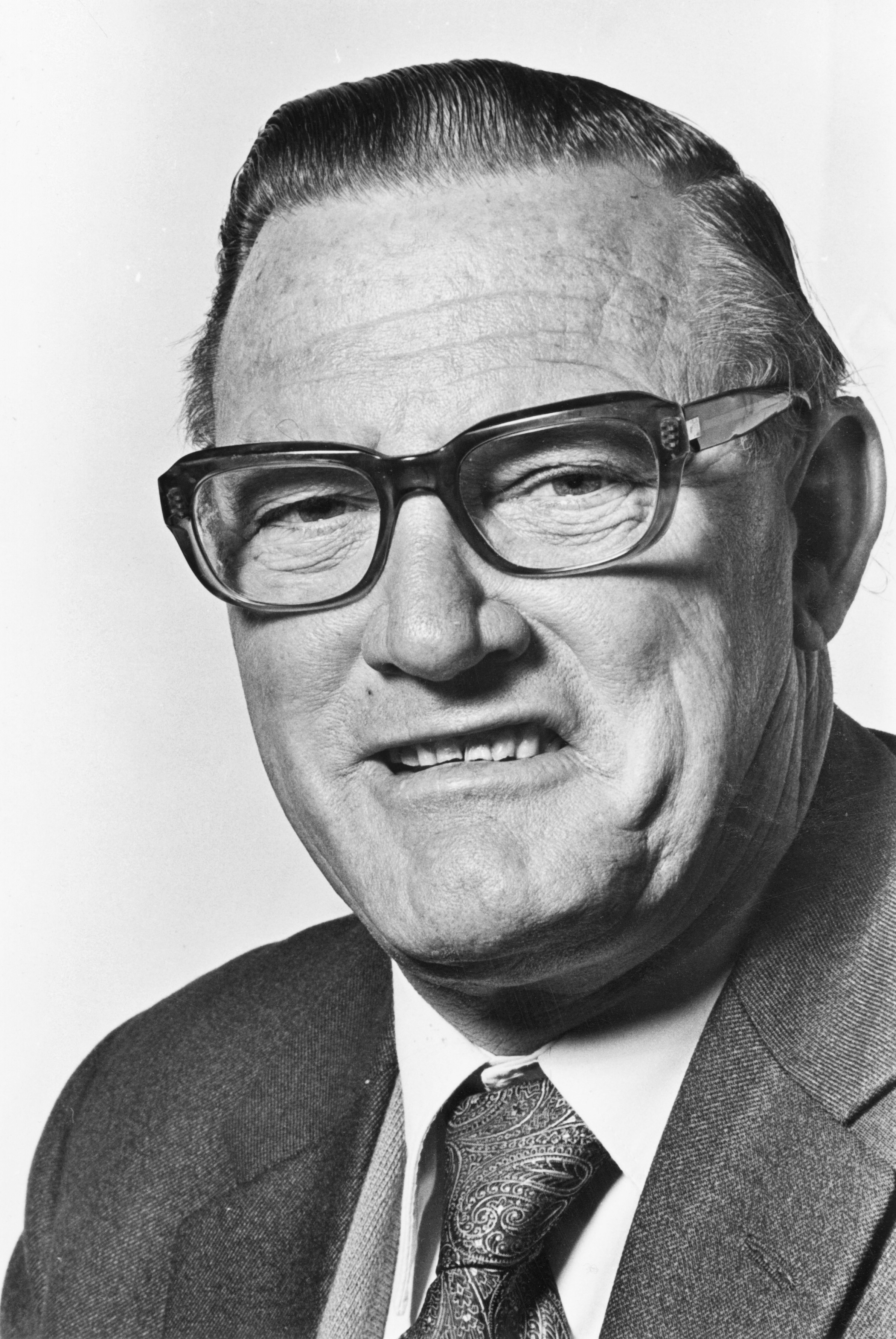 Born at Redfern in Sydney, Pat left school at 14. He started a bricklaying apprenticeship in Port Kembla on the NSW south coast in 1937 and was politicised by the 1938 dispute over exporting pig-iron to Japan (see footnote 3). In 1940, he married Alma Thomas. After studying Marxism with the intention of converting his socialist wife to Catholicism, he joined the CPA in 1943. Clancy was fond of leading the singing on special occasions. In the 1980s when he and devout Catholic and arch anti-communist, John Ducker, shared a Brisbane police cell together after protesting against Premier Joh Bjelke-Petersen, Clancy sang Ducker The Red Flag and Ducker responded with Faith of Our Fathers. Clancy’s love of classical music saw him serve on the board of Opera Australia from 1973 to 1978.

Clancy joined the United Operative Bricklayers Society and was elected to its Committee of Management in 1942. Upon its amalgamation with the Amalgamated Society of Carpenters and Joiners in 1943, he became South Coast secretary of the new BWIU. He was elected NSW assistant secretary in 1943, state secretary in 1953 and federal secretary in 1973. He was an ACTU Executive member between 1969 and 1979.

In the early 1950s building workers had no permanent conditions like other workers and were paid “cash-in-hand.” Overflowing pan toilets were the order of the day. There were no safety helmets. They went without pay when they were sick. Workers’ ‘compo’ was little more than half pay. Long service leave and superannuation were unheard of. All this changed as a result of struggle. The success of those struggles owes a great deal to Pat Clancy’s vision and leadership. Under his leadership the BWIU was transformed from a small, loosely knit organisation that operated from a few rooms in the Sydney Trades Hall with four organisers who organised on foot, to one of the nation’s most powerful and respected unions.

In 1948 the BWIU had been federally de-registered after taking industrial action; the start of the longest period of deregistration in Australian history. When Clancy became its secretary, McCarthyism was on the march. The Menzies government had sought to outlaw the CPA and ban communists from holding union positions. The Industrial Groupers were on the attack and a scab union had been set up. The Labor Right saw the Left, not the employing class, as the main enemy and collaborated with the employers to destroy the BWIU. The union was locked in a fight for its very survival. Although its leadership enjoyed strong support amongst the membership, this was not going to be enough.

Clancy set out to put the union on a new course with a bold strategy to win “permanent” conditions of employment, in what is a highly casualised industry. Outlawed federally, for 15 years the BWIU walked a constant tightrope between pursuing militant action and hanging onto its recognition in the state jurisdictions. But progressively, the BWIU won paid sick leave, annual leave, accident pay, long service leave, redundancy pay, superannuation and much more.

Clancy built a highly capable and committed team of BWIU officials that consisted of CPA and Left Labor members and non-party militants. He trained his officials in Marxist methods of analysis and practised a collective style of decision making – which made for a very united team. He kept closely in touch with the membership. Weekly organisers’ meetings were a two-way process he called “to and from the membership”. Tom McDonald recalls: “Pat used these meetings to plan tactics. He would insist that organisers had lunch time job meetings on the big political issues and report back about what the members thought. He would then map what was needed to be done in light of the members’ views.” Jack Ferguson, who later served as NSW Deputy Premier, once said that the collective discussion of strategy and tactics at BWIU officer meetings was "the greatest political experience of my life."

In 1975 Clancy pulled off one of his greatest achievements when he successfully negotiated a National Building Trades Award. It replaced 36 state awards and allowed the BWIU to use its strength in NSW and Victoria to improve the wages and conditions of building workers throughout the country. The agreement was testimony to Clancy's tremendous intellectual capacity, negotiating talent, ability to present a powerful legal and moral case, and skills in exploiting differences amongst the employers. In 1989, the national award was the benchmark used by the ACTU to successfully create a new minimum wage across the economy and lift the pay of the country’s lowest paid.

Clancy was a staunch internationalist and worked tirelessly to foster solidarity across the international trade union, socialist and peace movements. He was an executive member of the World Federation of Trade Unions. He organised extensive assistance for the building of trade unionism in the South Pacific. In 1984 he was the first to make union grants available for the establishment of Union Aid Abroad-APHEDA and the Australasian Mission of the African National Congress.

In 1952 he was a member of the first union delegation to the fledgling People’s Republic of China. In 1979 he was awarded the Order of Friendship of Peoples by the Soviet Union. His support for the Soviet Union did not make him a ’Stalinist’, despite the labels thrown at him. In 1968 Clancy and Tom McDonald had called on the Soviet Union to withdraw their troops from Czechoslovakia and ensure the safety of its leader, Dubcek. But in the Soviet Union Clancy saw a society that had lifted millions out of illiteracy and poverty; played the decisive role in the defeat of Nazism at unimaginable cost; was building a society based on free and universal healthcare, childcare and education; supported the national liberation movements; and stood against imperialism.

In the late 1960s major differences opened up within the CPA, reflecting competing views about international issues and the political and industrial strategy and tactics that should be pursued in Australia. These differences led to a large minority of the CPA leaving the party in 1971 to form the Socialist Party of Australia (SPA), with Clancy becoming the new party’s president. Clancy was not enthusiastic about establishing a new party but the exodus took on a momentum of its own; partly because of the enthusiasm within the ranks of the CPA leadership that the “dissenters” should go and partly because of the enthusiasm of some of Clancy’s confidants to go. In 1983 Clancy and his trade union base were forced out of the SPA after they opposed the party’s attempts to dictate policy and tactics to the unions and thereby compromise their democratic decision-making processes.

Clancy’s politics were grounded in Georgi Dimitrov’s theory of the ‘united front’. He believed that differences within the working-class movement and the Left should never be allowed to divert it from directing the ‘main blow’ against imperialism and the employing class. The unity he forged across the union movement laid the foundations for the creation of the Construction, Forestry, Mining and Energy Union (CFMEU). He also never rested in his efforts to build unity across the mainstream Left. In the early 1980s he established the Australian Marxist Forum as a place for Marxist-orientated activists to discuss common challenges and in 1985, with the CPA, helped organise the Broad Left Conference – arguably the broadest Left forum ever staged.

Pat Clancy was a man of huge intellect and principle. He established, in the words of Justice Ludeke of the Australian Conciliation and Arbitration Commission, “a reputation for integrity that was unsurpassed”. He died on 24 July, 1987. The Sydney Town Hall congregation at his funeral was overflowing with federal and state politicians and judges; ambassadors; leaders of the union movements of Australia, New Zealand and across the South Pacific; and a sea of Left activists and building workers. When the procession of thousands of suited dignitaries and workers in their hard hats marched down George Street that day, they bid farewell to one of Australia’s most outstanding communists.

Daren McDonald grew up around Pat and Alma Clancy. The McDonald family were amongst Pat’s closest comrades and confidants, and Daren’s father, Tom, was Clancy’s deputy in the BWIU for over 40 years. Daren was a member of the SPA and later a signatory to the Time to Act statement for a New Left Party.

McDonald, T. and A. McDonald, Dare to Dream: Stories of Struggle and Hope (East Gosford, NSW: Audrey and Tom McDonald, 2016).

This biography is one of the 150 written for the Communist Biographies Project. 100 Biographies are available in print only in Comrades! Lives of Australian Communists available by clicking here from the New International Bookshop.