'On Fairness' by Sally McManus - A review

An urgent message by an inspiring leader for all of us to organise in the defence of fairness.

Sally McManus, ACTU secretary and SEARCH colleague, has written a small, timely book on the topic of fairness in the MUP’s series Little Books on Big Ideas. It is a little book which I read in an hour. More of a lengthy address. 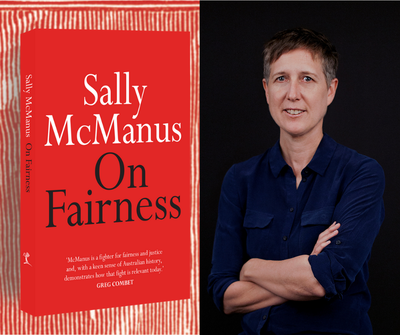 She opens recounting how on her first day as secretary – 15 March 2017 - she was interviewed on 7:30 by Leigh Sales and famously defended the right of workers to break unjust laws. While thumped in the media and by politicians, she received a standing ovation the next day in Sydney at a meeting of the NSW Teachers’ Federation. Since then, Sally has not looked back leading the charge to Change The Rules so workers can organise effectively, achieve more secure jobs and better pay.

The book develops the argument for a change on the simple basis of fairness or, if you like, justice, equality and a fair go, and it does so in a clear, forceful way. While SEARCH members will have heard the case for change many times before, On Fairness sets it out in a short, sharp way for the general public. The book has received wide publicity and distribution. I bought my copy in the National Library bookshop in Canberra. Hardly an inner-city lefty hangout. It is also timely given a Federal election three months away.

The book canvasses Sally’s development as a unionist, her mentors – Tas Bull and Tom MacDonald, in particular – the struggle for unions to be accepted legally as well as the current attacks on unions. All of this shows how unions only came to exist and deliver benefits by breaking unjust laws. Like a referee, the rule of law can only be respected if it is fair. Fairness drops out of the picture as capitalism forges an economic and legal system in line with its drive for profit. Non-standard work and so-called contractors replace secure work and employees. Government assets are sold off to the private sector. Income inequality explodes as tax rorts thrive.

“…[The] remedy for inequality is what it has always been: collective action through the organized movement of working people. The trade union movement is the equalizing, opposite force against the greed of the wealthy and the privileged.” (p 74)

We have then a balance that needs to be established or, if you like, restored as was supposed to have existed in the Golden Age of the post-war economy. (pp 62-67) Capital and labour can live as one provided both work together fairly. The labour movement with its political auxiliary, the Labor Party, principally, need to organise and fight for this balance.

On Fairness is not intended as a political manifesto. It is meant to alert us a ‘core value’ is under threat and organized labour must fight for its survival; break unjust laws if need be. However, it should be pretty clear to socialists the labourism projected here is insufficient, that the very terms ‘capital’ and ‘labour’ refer to on-going exploitation and not any possible long term cooperation. An entirely different social order is required, to be teased out of current and emergent conflicts. That is where we will find lasting fairness.

An important assumption of this book is that values such as fairness, equality, justice and the like are real qualities of our lives and institutions just as unfairness, inequality and injustice are too. They are palpable. You can experience them. Neoliberalism, instead, would treat a value such as fairness as somehow existing in us as a preference individuals might have. You think removing penalty rates is unfair. I think it is fair. And that’s all there is to it. It’s all subjective. Sally has no time for this. She just sails over the capitalist theories of marginal utility which reduce values down to preferences and there to be met in the market place of buyers and sellers. Putting a value like fairness centre-piece, pointing to its real erosion and how we may protect it, she affirms its reality, its capacity to give our lives purpose.

This is an urgent message by an inspiring leader for all of us to organise in the defence of fairness.