At the age of 14, Mick Tubbs was sent from Britain to an Australian orphanage. Despite suffering hardship and cruelty in his young years, he went on to become a barrister and an author. He joined the CPA in the 1950s and worked for the Party in Sydney as a full-time organiser in the 1960s.

Mick Tubbs’ life is remarkable - from the cruelty he suffered as a 14-year-old “child migrant”, to life as a CPA organiser and then a barrister at the Sydney Bar, and so much more. Mick saw injustice and hardship from a very young age. A theme of his life is speaking out against inequality. He had the courage to do that under extraordinary circumstances.

From the age of nine months, Michael (Mick) Tubbs spent his next 15 years in 10 different orphanages in five different countries. He was initially placed in an orphanage because his mother had developed tuberculosis, from which she died. There was no knowledge of his father, although Mick was later told that he went into a care home. Mick was brought to Australia, aged 14, under the British Child Migrant Scheme.

Many decades later, when Mick was in his eighties, he received compensation from the British government for his relocation as a child migrant to an Australian orphanage.

On arriving in Australia in 1950, Mick was sent to Dr Barnardo’s orphanage, known as Mowbray Park Farm School, just outside Picton, not far from Sydney. He was living with about 100 boys, who had also been removed from their homes in Britain.

No schooling was provided by Dr Barnardo. Mick’s duties involved milking the farm’s cows, caring for other farm animals, growing vegetables and clearing more bush to expand the farm. The hardship the boys experienced was not just caused by the early start on dark winter mornings and the long hours. The farmer who ran the farm was an extreme disciplinarian. Mick and some of the other boys took a stand against his brutality by refusing to work. Mick was regarded as one of the ringleaders and was sent to Yasmar Children’s Prison in Sydney. He was designated “an uncontrollable child” under what was then the Child Welfare Act. When the case came before the Children’s Court, the Magistrate dismissed the charges. Mick was then sent to Royalston, a boys’ orphanage in Sydney’s inner west, but he left within about a year.

At 20, Mick married Valerie Hanley and together they had three children. Mick moved through numerous jobs working in factories and as a farm hand. The exploitation bosses exerted over workers was how Mick saw the world. He now regularly sought out the union when he was in a new job and was becoming an active unionist. Mick acknowledges that at times he annoyed union officials because, in his words, he “resisted the union and employer’s attempts to get the union delegate to be subservient to both the union and to the employer”.

Through his paid work and union activity Mick was meeting CPA members. He joined the Party, became an active rank and file member and then in the 1960s, accepted a job as a full-time organiser for the Party.

This was at the height of the Cold War. The attacks on communists came not just from the media and conservatives, but also from within sections of the union movement and the Labor Party. But Mick’s principled support for socialism and workers’ rights never wavered. What he was learning through these struggles was that, despite the sectarian attacks communists often faced, it was still possible as a communist to build broad support to advance union and community campaigns. Mick played an active role in the anti-Vietnam war campaign. He was also very involved in the campaign to end apartheid in South Africa and was arrested at the Sydney protest against the 1971 Springbok tour of Australia.

Mick was a Party organiser during the famous Green Ban era. Mick did not just observe the industrial tactics of the Builders Labourers’ Federation and the development of the Green Ban movement; as an organiser he actively supported the unique form of struggle promoted by the BLF leaders, Jack Mundey, Bob Pringle and Joe Owens, and rank and file BLF members. Mick often spoke about how the success of the Green Bans came not just from the union’s industrial tactics, but also from building alliances across class and industrial interests. It was from this time that his life-long friendship with Jack and Judy Mundey was forged.

Public education became a major passion of Mick’s when his children attended local public schools. His work in this area was later recognised when he was made a Life Member of the Parents and Citizens’ Association. Around this time, he met Muriel Turner, who became his partner.

In 1979 at the age of 44, Mick graduated from Macquarie University with First Class Honours in Law. This had been made possible by a significant change brought in by the Whitlam government – the acceptance of mature age students into universities. This ushered in a new phase in Mick’s life, brought about with Muriel’s assistance. At the Bar Mick continued to display the courage and commitment to represent the interests of the disadvantaged, first seen when he himself was gaoled at Yasmar Children’s Prison during his orphanage years. In 1984, Mick founded the Lionel Murphy Chambers, where he practised as a barrister until he retired in 1998.

Political education was always a passion of Mick’s and his work in this area is reflected in two books he wrote – one on ASIO and the other on the corporate world. Mick’s book, ASIO: the enemy within, published in 2008, was informed by both his political outlook, his time as a lawyer representing people whose careers had been derailed by adverse ASIO assessments and the spying that Mick himself was subject to. Mick analysed spy agencies as an arm of the state that used secret policing to transform Australian political and civil society. The surveillance culture this generated, Mick argued, acts against the interests of the Australian people. 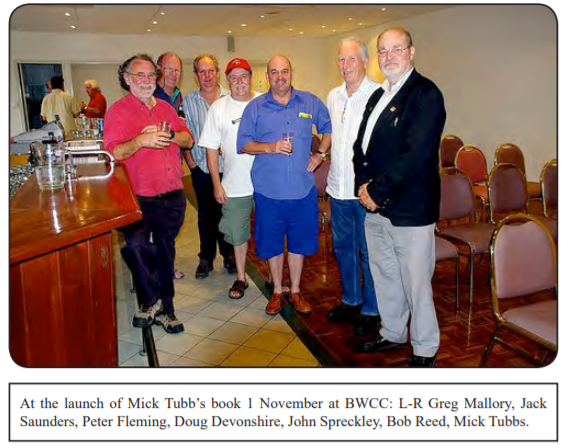 During his 18 years as a barrister, Mick frequently represented small businesses against some of the giant corporations which dominate the world economy. Mick again drew on his political and legal experience to write The Dictatorship of Capital, which was published in 2013. Mick attributed the interest this book attracted to people’s desire to understand the cause of the global financial crisis and interest in building “a free, democratic, sustainable and peaceful society”.

In his retirement Mick remained politically active as a member of the CFMEU Retired Members, the Combined Retired Union Members Association and the Greens NSW. He was a regular at community actions to support unions, May Day events, and protests calling for housing, environment and community protections. He regularly accompanied his good friend Jack Mundey to many Green Ban commemorations and union events.

In 2018 he joined a broad range of activists, unionists and Lithgow community members, at a special event to honour the work of Vern and Joyce Moffitt, local communists and environmentalists, whose tireless campaigning won protection for part of the unique Gardens of Stone on the western edge of the Blue Mountains. At this event Mick spoke of the need to ensure that environmental protection was accompanied by replacement jobs for local communities. The danger of coal mining and climate change was being more widely recognised and Mick identified the need to protect local communities and create new jobs for workers in old mining regions like Lithgow.

Mick made a mighty contribution to the communist movement. He formed many close friendships and gained great satisfaction from his political work.

His personal tragedy was immense. When he was placed in an orphanage at nine months, then relocated to Australia at 14, he lost connection with a sister two years older, who was also in the same orphanage, who was the only family member he had ever known.  However, Mick had some closure and happiness on family issues in his later years. When he returned to England, he found out that his father had lived until 1964, albeit in a care home. He reconnected with his sister, who had also been sent to an orphanage, and discovered he had another sister and a brother, with whom he developed a close relationship.

For over five decades, Lee Rhiannon has been well known for her environmental and social justice activism. She was a Greens NSW state MP and Senator for 18 years. She currently works closely with various communities struggling for self-determination, peace and justice in their home country. She is a committee member of the SEARCH Foundation.

The Dictatorship of Capital: https://books.google.com.au/books/about/The_Dictatorship_of_Capital.html?id=Z0VRnwEACAAJ&redir_esc=y