Jack Mundey was widely known in Australia for the Green Bans instigated by the NSW Builders’ Labourers he led in the early 1970s, to preserve the environment and historically significant buildings from development. He was a member of the Communist Party of Australia (CPA) for 36 years.

Jack Mundey’s death notice in the Sydney Morning Herald on 23 May, 2020, stated:

The notice sums up Jack’s extraordinary life. Jack Mundey was born in Malanda on the Atherton Tableland in 1929. He was related to my godfather, John Byrne, who had played for the Atherton Rugby League Club. My father, John Mallory, was a club official and knew Jack fairly well. Jack was an accomplished rugby league player, representing Eacham in the Foley Shield.  He also boxed and played cricket. In 1951 when Jack was in his third year as an apprentice plumber, he was recruited to go to Sydney to play for the Parramatta Club. Jack was coached there by the legendary Vic Hey and he played for three seasons, mainly in reserve grade. He went on to captain/coach Wentworthville and Riverstone. At Wentworthville he was succeeded by the famous Welch captain/coach, Lewis Jones.

In Sydney Jack first worked as an ironworker and he joined the Federated Ironworkers’ Association (FIA) and in 1953 was involved in his first political activity to Ban the Bomb. In 1955 he joined the CPA, because “they were people who wanted to make life better for ordinary workers”. In 1956 he became a builders’ labourer and joined the NSW branch of the Builders’ Labourers Federation (BLF). The working conditions were atrocious and in the words of Darcy Duggan: “…make-shift bloody ladders, the likes of toilets of which there were only four posts with a bit of hessian around, the state of the sheds was bad, just made out of corrugated iron.”

The group eventually became more active and by 1961, Mick McNamara became BLF Secretary and Jack a temporary organiser. In 1968 McNamara resigned due to ill health and Jack became Secretary. In 1969 Bob Pringle became President and Joe Owens a temporary organiser. In 1965 Jack married his second wife, Judy Wilcocks, after his first wife’s early death, and she remained his partner for over 50 years

One of the main jobs of the new leadership was to ‘civilise the industry’. This took place in two campaigns: the Accident Pay Strike and the Margins Strike. These two campaigns enhanced the status of the builders’ labourers. This industrial militancy laid the platform for the union to move into other areas, easily summarised by Jack when he said:

If it wasn’t for that civilising of the building industry in campaigns of 1970 and 1971, well then I am sure we wouldn’t have had the luxury of the membership going along with us in what was considered by some as ‘avant-garde’, ‘way-out’ actions of supporting mainly middle-class people in environmental actions. I think that gave us the mandate to allow us to go into uncharted waters.

In June 1971 a group called the Battlers for Kelly Bush approached the NSW BLF to help them preserve the last remaining bush in Hunters Hill. AV Jennings had planned to clear the property and build a high-rise development on the site. After a meeting with the local community, the BLF decided to place a black ban on the site. In 1973 Jack coined the term Green Ban to describe the actions. From then on, actions that were taken in support of the environment were described as Green Bans. 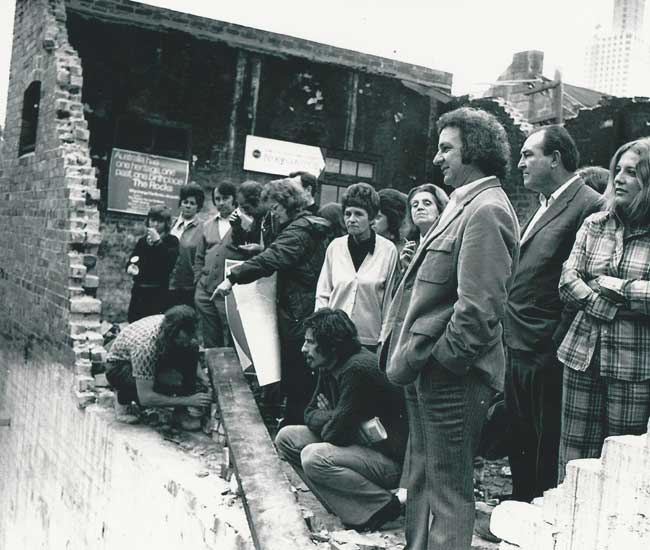 Two of the political/social bans were at Macquarie University and Sydney University. At the former the Green Ban was in response to the expulsion of Jeremy Fisher and Penny Short for declaring their sexual preferences.  The other was to introduce a women’s course at Sydney University.

Meredith and Verity Burgmann have argued that Mundey’s position was to some extent syndicalist and incorporated aspects of the new left. Mundey’s relationship with the CPA is important to note here, as changes in the Party were occurring, such as the rejection of Stalinism. Jack argues that he went beyond the CPA mainstream. The changes in the Party, in which he was a leading member, along with Laurie and Eric Aarons, coincided with his view on limited tenure of office and a new way of thinking in the union movement. Limited tenure of office meant that union officials should return to the rank and file after some time in their position. Green Bans represented a socially responsible position.

In 1974 Mundey and Owens, as well as other NSW BLF members, were suspended for three years by Federal Secretary, Norm Gallagher. Jack and others fought these suspensions.

I met Jack in 1977 and was a friend ever since. Every time I would visit him in Sydney, we would meet up on a Friday night at the Coronation Hotel, with his builders’ labourers mates, and then down to the Criterion where we would drink with members of the remnants of the Sydney Push and then on to Diethnes for dinner. A few years later we would meet at the Teachers Club and go on to Diethnes. Jack was a very affable person, who always showed interest in who he was mixing with. At my book launch in Brisbane he made sure he met my sister and her husband and my mother and mentioned them in his speech.

Jack became an advocate for urban environmentalism, for which he received accolades. In 2000 NSW Premier, Bob Carr, appointed him Chair of the Historic Houses Trust. He served for 20 years on the Executive of the Australian Conservation Foundation and became an ACF Life Member. He also served on the Sydney City Council in the early 1980s. He was awarded an Order of Australia in 2000 and became a National Living Treasure in 1999. In 1998  he was awarded an honorary Doctor of Letters from the University of Western Sydney and an honorary Doctor of Science from the University of New South Wales and in 2000, a Masters of the Environment from the University of Sydney. After receiving an invitation to speak at the University of Wollongong, he told me with his dry sense of humour that he would go  “as long as they don’t award me with another Doctorate”.

At my book launch in 2005, he signed the book ‘Towards a Red-Green Alliance’. To give an example of his broad reputation as an advocate of the red-green alliance he launched a book on communist, Fred Paterson, by Ross Fitzgerald and a book on the history of the green movement by Drew Hutton and Libby Connors. As for his Rugby League playing days he received an honorary mention on the NSW Rugby League website on his death. The NSW Labour Council lowered its flags to half mast on the day he died.

Jack was a friend of the Brisbane Labour History Association. He came to Brisbane three times to support the Association’s activities. Firstly, in 2003 he opened its seminar on the Communist Party; secondly, in 2005 he spoke at its conference on the ACTUs Your Rights at Work campaign, where he was accompanied by leading trade union figures; and thirdly, in 2010 he was the guest speaker at the Association’s conference on the theme of Red-Green.

Jack’s hope for the future is stated in his book, Green Bans and Beyond, that we need a “socialist world with a human face, an ecologist heart and an egalitarian future.”