If the West goes to war with Iran, the planet cooks. Imagine a superpower in rapid decline, war-weary, exhausting all of its remaining resources to invade a strong middle power that has control over a good percentage of global energy distribution, sparking a mass refugee exodus, effectively destroying the coherence of the international order — at precisely the moment it needs to cohere around a rapid climate transition.

The true absurdity of this planet is reflected in the fact that Tucker Carlson, a Fox News presenter, appeared to play a decisive role in talking Trump down from launching a military strike on Iran.

There is a debate occurring in the United States between two factions - neoconservatives, the ideological group responsible for the invasions of Iraq and Afghanistan, and capitalist isolationists, who oppose them.

The neoconservative’s strategic priorities are probably the same as they were in the Iraq War - create a huge opportunity to transfer state funds to the military industrial complex, and then privatise resources that belong to the Iranian people to American firms.

Don’t be fooled, though - capitalist isolationists do not have a genuine commitment to peace, diplomacy, internationalism and Iranian lives.

The key difference between the two camps is that they have a different perception on the return on investment from a war on Iran - are we really going to profit on this? John Bolton says yes, Tucker Carlson thinks no. 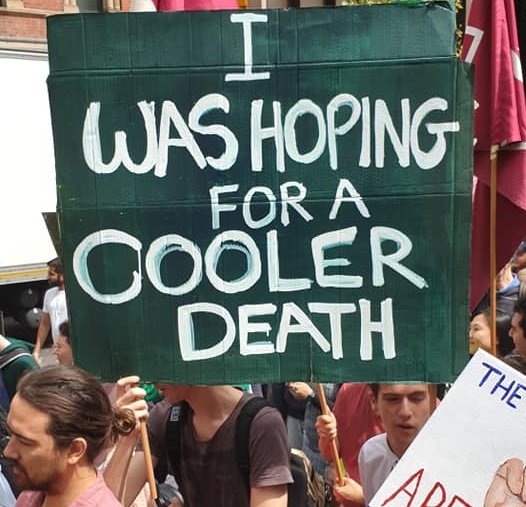 We owe Tucker Carlson no great debt. It speaks to our sorry state of affairs that a News Corp hack that doesn’t perceive war to be a very profitable enterprise for the U.S appears to be all that stands between us and global catastrophe.

This does expose conflict within the American ruling elite. Actors beholden to military-industrial complex are correct when they believe that another foreign intervention will be immensely profitable for them. U.S capitalists who are not invested in the military-industrial complex, however, have good reason to be concerned that such a conflict might undermine American hegemony.

We should hope that Trump will continue listening to Carlson and people like him, but we shouldn’t depend on it. We should be mobilising against a war on Iran now - building a broad-based movement that understands that peace and a climate transition depend on each other.

None of the factions competing for Trump’s ear accept the science of the climate emergency. At the point in history where we need to devote all of our resources and organisational capacity to care for the ecosystems that sustain us, the United States ponders a bloodbath.

It is true that we should oppose war because we believe in peace. We should make appeals about the inherent value of Iranian lives. It is true that in the event a war with Iran occurs, it will consign the Middle East to permanent chaos - Iran is by territory and population significantly larger than Iraq and Afghanistan, it’s military (and therefore capacity to resist U.S invasion) much larger and more sophisticated.

It is true that the region can’t be thought of discrete areas of chaos. The destabilisation of Middle Eastern states interrelate and compound each other, producing a regional problem greater than the sum of its parts. Every new instance in which a state is destabilised does not represent an addition to the problem - it represents a multiplication of the problem.

It is true that perhaps, even, we should make appeals to how global economic stability would be compromised by a war with Iran. Very few in the developed West wish to see energy shortages and price rises in basic commodities. A war with Iran would likely entail this.

All of this anti-war thinking is eminently true and reasonable. It isn’t enough - at this critical juncture for the planet, being anti-war and being for climate justice are inherently bound together. There is not one without the other. We must think in both terms if we are to have a proper map of the crisis we face. Mounting opposition to a war is not “over here”, resisting climate breakdown “over there”.

The horizon that has been opened by movements and organisations like School Strike for Climate and Extinction Rebellion is meaningful. Any anti-war effort should attempt to channel these movements by highlighting the interrelationship between peace and climate.

If the West goes to war with Iran, the planet cooks. Imagine a superpower in rapid decline, war-weary, exhausting all of its remaining resources to invade a strong middle power that has control over a good percentage of global energy distribution, sparking a mass refugee exodus, effectively destroying the coherence of the international order — at precisely the moment it needs to cohere around a rapid climate transition.

Inversely, we should see a deteriorating climate increasing the likelihood of war. Water and resource shortages are likely to produce distributional conflicts that may be very challenging to resolve with cooperation. We must begin to start thinking in terms of future conflict being climate conflict, and all future conflict compromising a safe climate future.

We need to reflect on how precarious our position is right now. Averting global cataclysm is contingent on whether Donald Trump keeps listening to Tucker Carlson and his ilk, and not John Bolton and his ilk. Whether or not the greatest war machine in the history of the world is deployed to engage in wholesale planetary destruction is determined by this.

We must come to the position that opposing war and fighting for a safe climate are no longer categorically separate things, entailing separate actions. Thinking this way should provide a meaningful foundation for a broad based anti-war, environmental movement.

This is a movement we need urgently - lest we leave the planet’s future to depend on whether Donald Trump thinks a war on Iran will be profitable or not, and whether Tucker Carlson can persuade him it is not.