In Part 2, Don Sutherland continues his analysis of the discussion of wages repression and inequality in the latest edition of the Journal of Australian Political Economy.

What makes all of this useful? After all, as one Facebook friend said to me, correctly in my view, workers like him don’t need academic research to tell them that their standard of living is under pressure and is falling; that their jobs are not, when it comes to wages, jobs they can rely on. 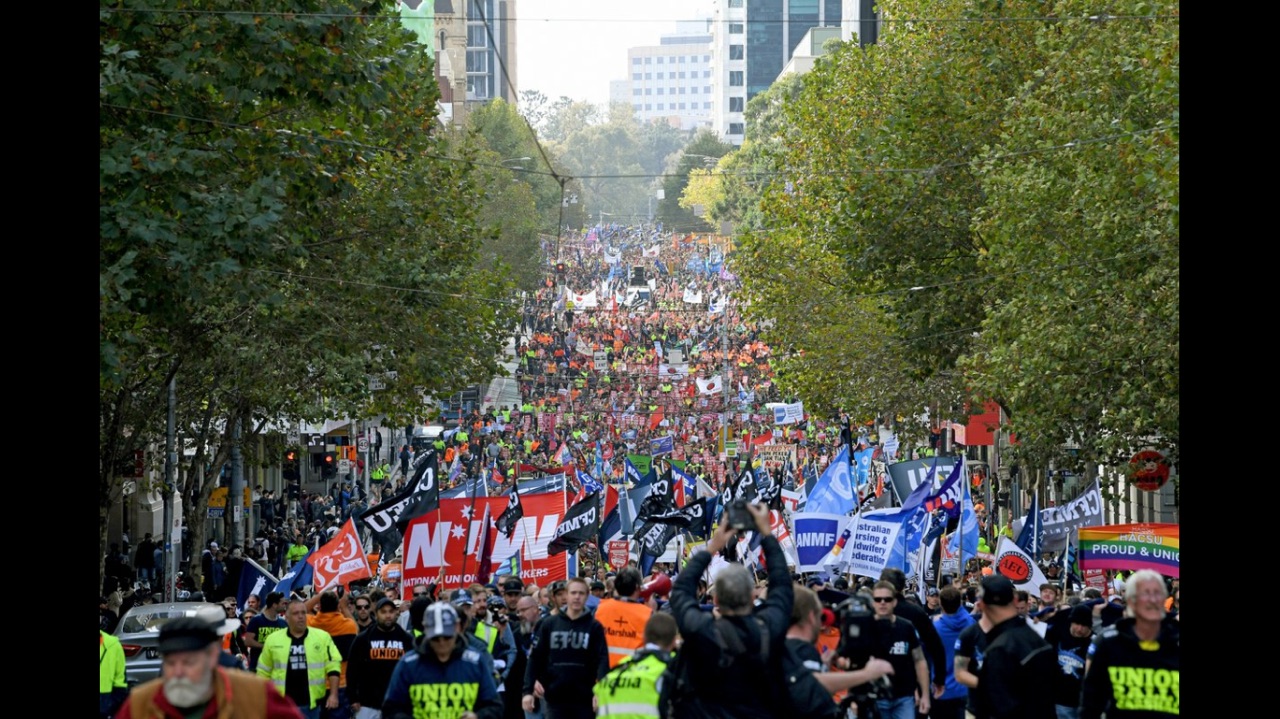 Workers rally to Change the Rules in Melbourne, May Day, 2018

There is much truth in this, even more so when workmates are agreeing with each other and then thousands and tens of thousands join in.

However, there are many workers who are not convinced or do not yet care, superficially at least. It is a part of winning the struggle to improve living standards to have the more detailed information and explanation that is available to confirm and reinforce and, perhaps add to, what the majority know from experience.

This material helps to win workplace level debates (not just public media) that convince more workers to join in the struggle and more vigorously. Further, it can provide insight for the union movement to develop a much better strategy than it has been using in the last 20 years.

Clearly, an industrial strategy (core business for unions) that accepts the broken rules (union practice since 2008) is not working; enterprise bargaining has been destructive for everyone, even for those who have had some wins under it, and the decline in labour’s share coincides also with further decline in union density and the decline in strike based struggles.

Now, some remarks about what I think is inadequate in Jim’s article.

Labour compensation therefore exists in relationship to profits. What’s happening to the “labour share” can’t be fully understood without fully understanding what’s happening to “the profit share”. The continued downward pressure on wages does have a perverse logic in relationship to profits. There must be something going wrong with profits to require downward pressure on wages. Therefore, what is it that is going wrong?

Jim treats this relationship perfunctorily and, therefore, amid all of the good stuff, he does not arrive at any satisfactory explanation about why both sides of government must help employers push the “labour share” downwards, and why employers and Labor do form an essential relationship. He cannot describe the “causes” of the problem and that leaves him short on what the strategy could be to deal with it.

Let’s check this point in another way. At the start of his article Jim refers to a speech made by Philip Lowe, the Governor of Australia’s Reserve Bank, back in 2017. In that speech he expressed concern about a low pay crisis. He repeated that in June 2018  in a speech to about 1000 manufacturing employers organized by the Australian Industry Group.

We can say this for sure: if you asked those 1000 odd employers what their first priority is, the answer would be profits. In their heads, listening to the Governor, they would be thinking through this question: “What does his message about wages mean for my profits, especially my profits relative to the capital I already own and relative to my competitor?”

This is the real world that workers must confront.

What is lost on the Reserve Bank Governor (at least in public), is that wages can only be understood properly in relationship to profits and the fixed capital that the labour (paid for with wages) brings to life to create new wealth, including those profits. (Among other things you might have noticed that he suggests workers ask for more, I guess just like Oliver Twist, and that employers should give them something. Are you remembering what happened to Oliver? The Governor does not call for industrial struggle.)

It’s a worry for our movement when Jim and so many other labour (and environmental) make this same mistake. I look forward to reading the other articles to see if this mistake is remedied.

If we know what is happening to profitability we get a clearer sense of why there is a long term downward drive on wages. We are then truly analyzing the problem from the point of view of workers and opening up the prospects of an improved strategy to deal with it.