Graham Smith was a factory worker, teacher, education reformer and trade union leader in South Australia, with a strong commitment to democracy, social justice and equality. He was a member of the CPA from 1944 until his death in 1989.

Graham Smith is remembered for his lifelong commitment to democracy, social justice and equality and for his tireless work for international solidarity and peace. To his colleagues and students, he was an exceptional teacher who envisioned and realised sweeping educational reforms in South Australia and beyond. His achievements as a trade union leader were transformational.

Born in 1924 to Frank and Olive Smith, he was the oldest of four children. His father was a manager in the South Australian Railways, a devout low-church Anglican and Freemason, politically conservative, anti-labour and anti-union. Graham was close to his nurturing and compassionate mother. In his teenage years, he ran the house during her long illness. That experience, and his mother’s influence, were important in forming his character and values.

He left school with the Leaving Certificate in 1939 to work in the Bank of South Australia. It was while he was a clerk in the bank’s Naracoorte Branch that his political radicalism was awakened through his realisation that the teachings of the Church conflicted with his own observations of the world. That assessment was reinforced through his readings on the arms trade, international politics and socialism and the comradely support of Phil Howlett. His politics were further transformed through war service.

Called up to the AIF in June 1943, he served for 39 months in New Guinea and Indonesia, first as a surveyor and then in the Army Education Corps. He participated in discussion and reading groups in the army, focused largely on the socialist promise of the post war reconstruction project. At the end of 1944, he joined the CPA in his unit and was demobbed in 1946, resolutely committed to world peace, international solidarity and the transformation of Australian society.

Initiating his life-long love of learning, Graham enrolled at Adelaide University in 1946, where he enjoyed student politics, continued his peace work and supported the CPA’s campaign for Indonesian independence. He married Sally in 1947. As the Cold War deepened, Graham struggled to obtain secure full-time work, because of his political beliefs. In 1951, he responded to the Party’s directive to ‘build revolutionary momentum through industrial work’, by joining Perry Engineering’s Railway Workshops at Islington.

His wages at the Railway Workshops were low and the Party work unrelenting.  He was coping with Australia’s pervasive culture of ‘redbaiting’, while working with others to resist Menzies’ attempts to ban the CPA, continuing his work in the peace movement and participating in intense local government politics in Marion. All the while, he was maintaining his conscientious work as a shop steward for the Federated Ironworkers’ Association at Perry Engineering in the face of the National Civic Council’s white-anting tactics in the union movement.  He recognised later that this was a very difficult time for his growing family. For this and other reasons, Graham charted a new direction by becoming a schoolteacher in 1956.

Appointed initially to primary and then to secondary schools, he became widely respected by colleagues and students alike for his innovative, inclusive teaching. In 1960, he was elected on a reforming platform to the executive of the South Australian Institute of Teachers (SAIT).

At that time Australian education was in terrible stasis. Education policy, curricula, teaching methods and the design and fabric of school estate had barely advanced since the previous century. Teachers endured low status, poor pay and conditions and archaic industrial structures, including discrimination against women. School principals and education unions were conservative and quiescent, and successive post-war governments were remarkably resistant to educational reform. Graham’s massive achievement – always with others – was a reversal of these problems in an astonishingly short time.

During the 1960s, for example, he was the prime architect of a successful campaign for wage justice for the teaching profession, including the introduction of equal pay for women. The remarkable ‘Better Education’ campaign achieved a revolution in community and political recognition of the value of teachers’ work and proper state governance and investment in education. He also led innovations in school curricula; his textbook revolutionised social studies, as Craig Campbell has noted, “through an insistence that secondary schools and teachers had a responsibility to bring students into a critical interaction with their contemporary society”.

A crucial success was his professionalisation and mobilisation of SAIT, forming it into a powerful teachers’ union and a force within the wider trade union movement. In all of these respects, Graham’s leadership effected advances in teachers’ conditions and the modernisation of education policy in other states, extending ultimately to the 1972 Whitlam Government’s reform agenda and the Australian Education Union’s formation in the 1980s.

Between 1972 and 1981, Graham lectured in social science at the Western Teachers’ College (later the South Australian College of Advanced Education), though he continued his valued association with teachers’ unions, education boards and the United Trades and Labour Council (UTLC). It was during this period that he married Leonie Ebert, also a teacher and trade unionist. When Leonie was promoted in 1981, Graham retired to become ‘main house person’ to the family, which now included young Naomi.

The balance of Graham’s political life was substantially devoted to the peace movement, through his membership of the Coalition for Nuclear Disarmament (CND), People for Peace and the UTLC’s Peace Council. He remained an active trade unionist (including supporting Leonie who was, for a time, SAIT President), carried out part-time teaching and work within the CPA. Amongst support for Australian tours of other prominent socialist and liberation leaders, he organised the 1987 visit to South Australia of the South African ANC representative, Eddie Funde, and was active in solidarity work with teachers in the Philippines and elsewhere. Along with many others, he was deeply saddened by splits in the CPA, especially after 1968, and with the communist movement’s decline in following years. 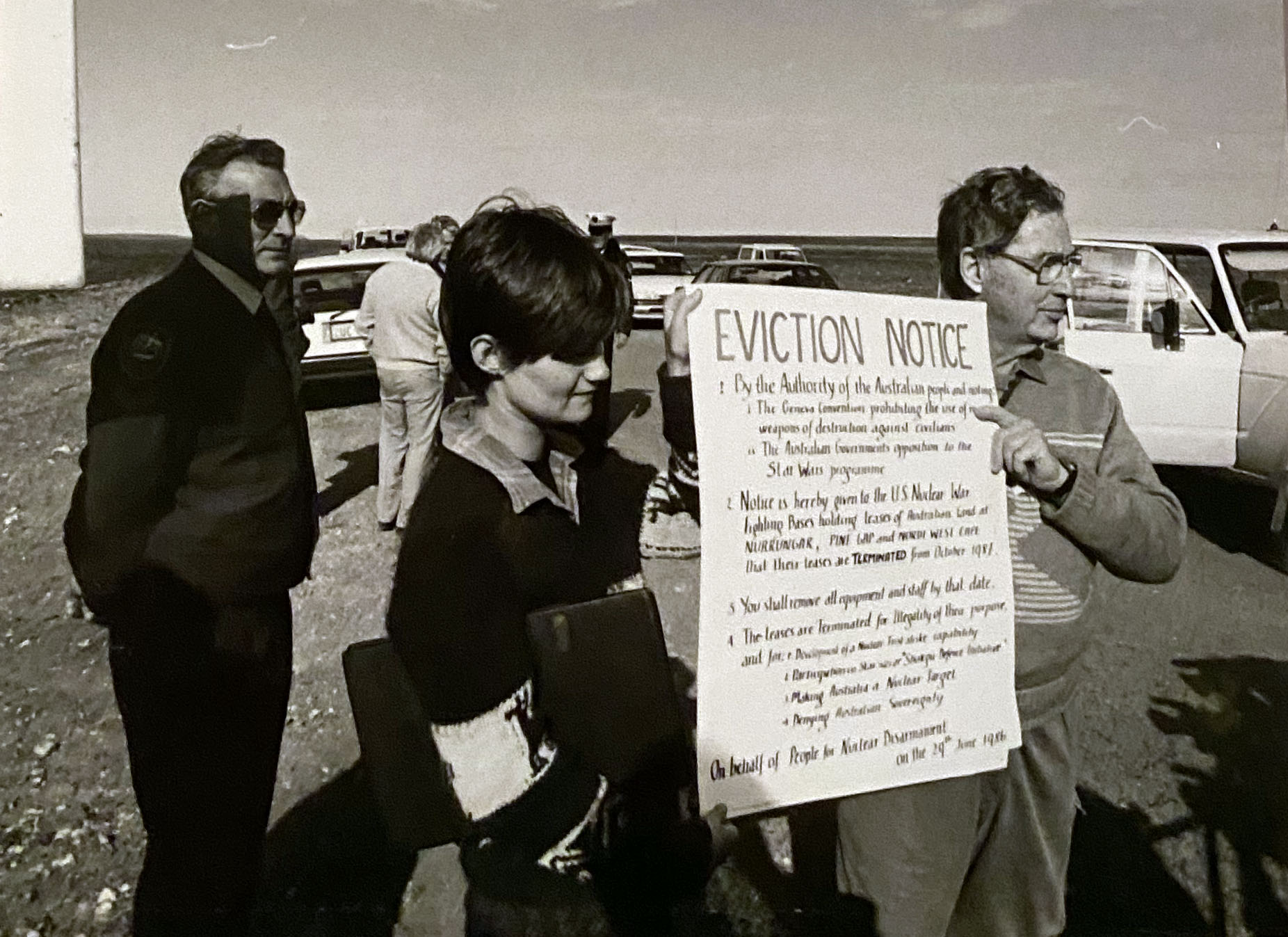 Many have written of the values and personal qualities which were the wellspring of Graham’s vitality and of his many achievements including: his passions for democracy, equity, social justice and international peace; the clarity of his intellect and analysis, capacities for strategy, planning and persuasion, for building loyal friendships and effective political alliances, charisma and oratory, and organising skills, and not least, his generosity and profound humanity. Distinctively, Graham led by example, never asking anyone to do anything that he would not do himself. The family home was a hive of conviviality, a centre not only for the discussion of social and political issues, but also for fun, food, singing and the building of communities of activists.

Graham observed in his autobiography that “I have chosen to contribute to our history by being an active participant in it”. That, manifestly, he did, to the enduring benefit of us all. It is especially fitting that his legacy has been celebrated through the Graham F Smith Peace Foundation, which advocates for peace through the arts and education, founded and ably led by Leonie Ebert for the last 30 years.

Adrian Graves is an economic and social historian who enjoyed a career in scholarship and administration at universities in England, Scotland and Australia. His political activism included the peace movement, Australian Indigenous rights, various anti-racist organisations including the anti-apartheid movement, and workplace trade unionism in both the UK and in Australia. He was Coordinator of the SEARCH Foundation between 2014 and 2018.

Smith, Graham F., Speak up, Reach Out: A life to Reckon With (Adelaide: Wakefield Press, 2015)