Edith Taylor was a mother of eight, a community activist working for peace and justice all her life, and a member of the CPA for over 30 years.

Edith Taylor was born Edith Gertrude (Gerty) Tilley on 19 July 1894 in Kettering, England, the eldest of seven children. Her father, Hedley Tilley, was very active politically, helping Keir Hardie and others to establish the Independent Labour Party in the UK. Edith recalled that he spent many weekends cycling around England to speak at ILP meetings. Her mother, Emma, worked for women’s suffrage, as did Gerty as she grew up.

Hedley was a bootmaker who spoke openly of his radical views, trying to educate and activate people. This was not good for trade and the family moved from village to village as his boot repair shops failed. Emma would say, “Now, m’duck, you will keep your views quiet!”, but for Hedley that was impossible and so the moves went on.

Their longest stay was in Boston, where Gerty did so well at school she gained a scholarship at a teacher training school. But two months later Hedley had to move again, this time to Peterborough. Since he was no longer paying rates in Boston, the scholarship ended. Gerty then did domestic work, usually ‘live-in’, in surrounding villages. Then she worked for some time in a boot factory, followed by a job as a hospital cleaner and wardsmaid.

In 1910 one of her brothers wrote a humorous poem about her. The chorus gives an indication of her staunch activism, at the age of 15:

For the boys she’s not old enough yet

But she’ll go for a copper

And give him a cropper

After Australia became a Commonwealth, and after one more sacking for ‘rousing up the workers’, Hedley brought his family to Australia, so that “they could grow up free of the Royal Family”. He and the three eldest boys came first, working to save money to pay the fares for Emma, Gerty and the three youngest to follow a few years later. The family continued their political lives in Australia.

Gerty married a seaman, Stan Taylor, in 1916, soon after he returned from a trip to the Antarctic, working as a greaser and stoker on Douglas Mawson’s Aurora. They lived first in Sydney, then moved to Melbourne. They had eight children. Stan left the sea and became a wharfie, then during the Depression was unemployed. Some of their experiences during this time are recorded in Wendy Lowenstein’s Weevils in the Flour. Finally, Stan worked in a motor factory. His main political activity was in trade unions. He died in 1946. 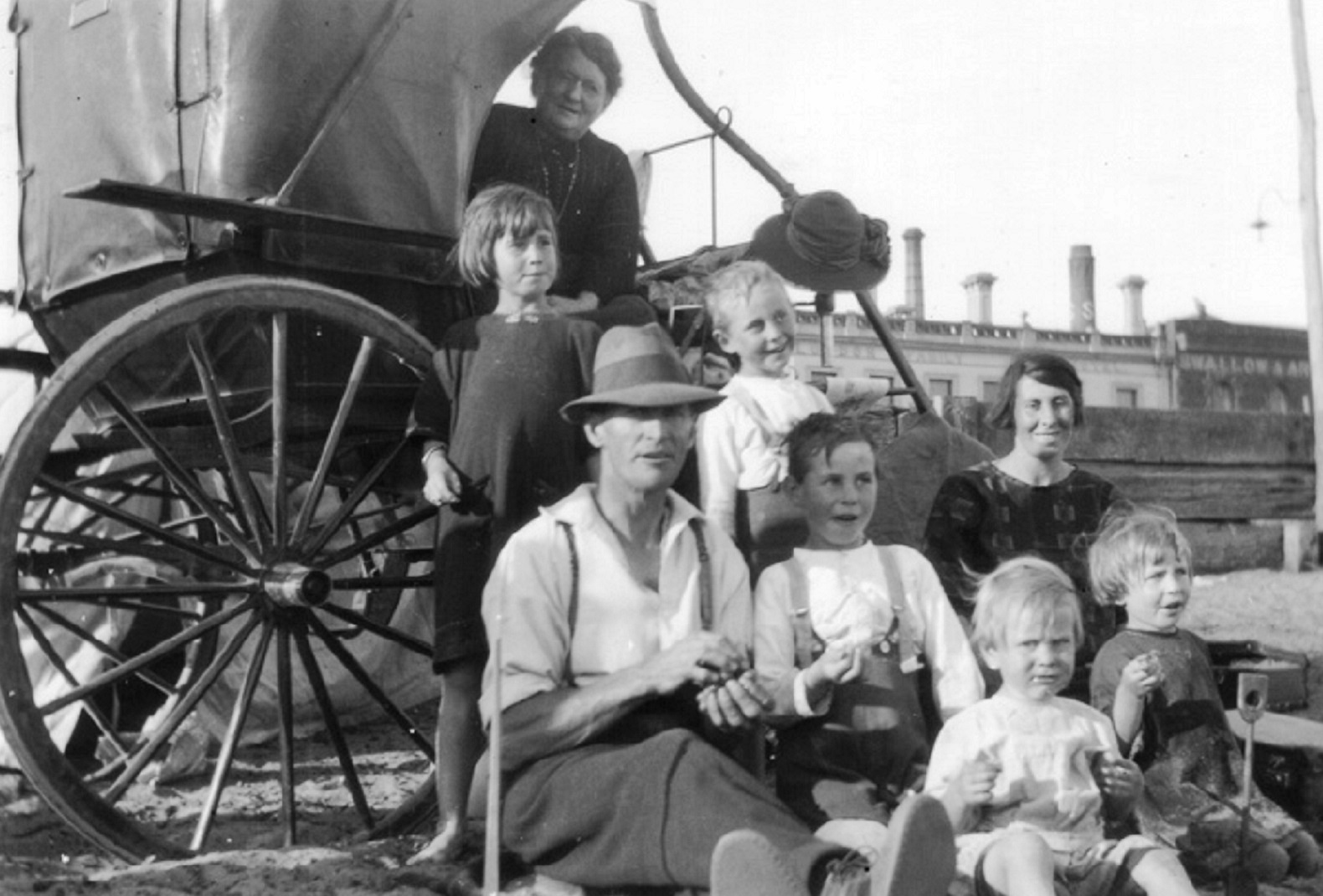 In middle age Gerty decided to use her first name, and so most activists in Melbourne know her as Edith Taylor. Edith applied to join the CPA in Melbourne when her eighth child was a toddler. She was told that she could not join until that child, Irene, went to school, so she had to wait until 1939. In the meantime, she became very active in women’s organisations. Irene’s earliest memories are of being with her mother at meetings of the Housewives’ Association, crawling along the long seats as Edith argued and debated. The more politically conscious among the group, including Edith, set up the New Housewives’ Association (NHA), and later the Union of Australian Women (UAW).

After World War II, when the Australian Peace Council was established, Edith volunteered in their office. She later joined the Campaign for International Cooperation and Disarmament and remained active there and in the UAW for the rest of her life.

At one Vietnam protest, when Edith was about 70, she sat down in Bourke Street, in the front row of people facing a line of mounted policemen. She always bravely did whatever was needed, despite being a shy person.

Stan never joined the Party, but supported Edith, looking after the children and letter-boxing leaflets for her. He taught the youngest kids how to fold leaflets properly and fast, and to letter-box them. When the Party was banned in 1940–42, he taught the children how to put the leaflets in the boxes without stopping, to avoid being seen.

During the 1940s, it was illegal to hold a march, so the NHA members wore big aprons with messages printed down the front and walked through city footpaths, several feet apart, so their messages would be seen. Still young and shy, Irene was relieved when Edith allowed her to walk right next to her and not all by herself some feet away.

Edith’s home was a hotbed of political debate, meetings, leaflet folding and placard-making. She remained a determined political activist in the face of Party and community sexism that expected her to stay at home while her husband played the public role. Edith and Stan defied those stereotypes. 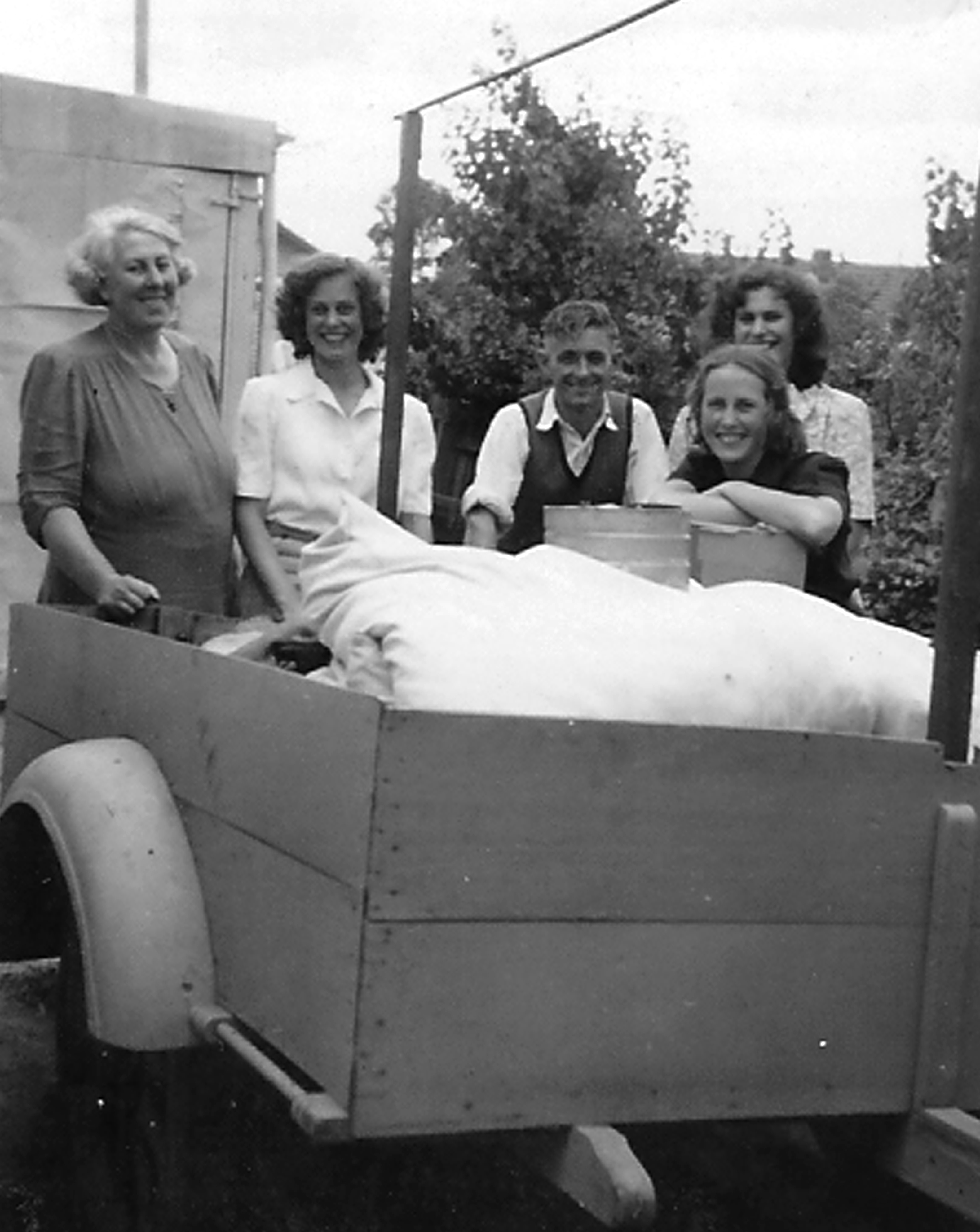 Off to Camp Eureka - Edith Taylor with Jack Stanning and daughters Audrey, Irene and Nancye, 1947

Four of Edith’s daughters, Grace, Nancye, Audrey and Irene, joined the UAW. All her children were trade unionists. Several were active in the Eureka Youth League and as adults joined the CPA, as did some of her grandchildren. Generations of Tilley and Taylor offspring have been active in the movement against the Vietnam war, in May Day marches, trade union, peace, Aboriginal rights, environmental, anti-apartheid, social justice and other campaigns. Edith was delighted when Irene was asked to carry the flag to lead the Eureka Day march through Melbourne in 1949.

In 1978, Edith gave a copy of Weevils in the Flour to each of her grandchildren, so they could better understand life during the Depression. She wrote in the copy for her grand-daughter Linda: “This is reality. The times we suffered must never return. It will take the vigilance and dedicated effort of all of us to ‘stop the rot’ and to work for a decent life for all the world’s people.” In a copy to her grandson, Owen, she transcribed an extract from the poem We are Many, They are Few, by Jack Lindsay:

Peace is a country to be won

By you, and me and everyone

To reach its frontiers, we shall need

All our thews of word and deed.

Edith spoke about her experiences during the Depression to ‘Wednesday Night at the CPA’ in Melbourne in the late 1970s, including that things were so dire her family lived on quinces for nine weeks. That was before Irene’s time, but the period when Edith served quinces in every imaginable way was legend in the family.

Edith taught Irene that if something bad happened and you could do something about it, you must use all your strength and knowledge to put it right, but that if something bad happened and you could do nothing about it (for example, someone died), then you should come to terms with it, look to the future, and get on with life. That was certainly how she lived her life. She had several major operations and illnesses, but she remained positive, caring and committed to a better world throughout. She was delighted to see how her daughters and many grand-children followed her example, and would have been thrilled to see that many of her great-grandchildren are still doing so.

Irene Gale AM, Dip. T, ALCM, is Edith Taylor’s youngest child and a lifelong activist in the peace and anti-racism movements in Australia and New Zealand. She now lives in Adelaide.

Both are proud to carry on Edith Taylor’s activist legacy.