Dick Blackburn was a "lifer", joining the CPA in 1936 and remaining to its end. His great period of activism was the 30 years from the 1940s to the ‘60s. In later years he represented continuity as the Party was transformed as a result of feminism, the rise of the New Left and the rising significance of the social movements.

Dick (Gerard) Blackburn was engaged in left labour politics from an early age, distributing "how to vote" cards on behalf of his father, Maurice, at elections in the 1920s. Maurice Blackburn was a fierce anti-conscriptionist during the World Wars of 1914-18 and 1939-45. He could also act as a Labor Party conscience on matters involving civil liberties. He was one of the labour movement's great men, whose funeral in 1944 attracted the Prime Minister, John Curtin, and many in federal and Victorian government ministries.

Yet, Maurice's son, Dick, disagreed early with his father. When he entered the University of Melbourne at age 16, enrolling in an agriculture degree, he soon joined the CPA in 1936, and the communist-led Labour Club. It is an irony that in his father's last election as an Independent (Maurice had been expelled from the Labor Party for holding on to anti- conscription views despite the Japanese threat), too many votes for the CPA’s candidate ensured Maurice's defeat. Emotionally, Dick was close to his mother, Doris Blackburn, a long-time activist on behalf of the Women's International League for Peace and Freedom (WILPF) and numerous other progressive causes, including the Aboriginal Advancement League.

We have two portraits of Dick as a communist student leader at the University of Melbourne. Rivkah Mathews, a fellow Party member, wrote of his good looks, his "tight blond curls and a Grecian profile", and his high status among left students, considered "something of a guru", given his father's role in the labour movement. Dick's younger sister, Louisa, also described him: "He went round – this little curly headed bloke – with a cafeteria tray, banging on it and recruiting people to the meetings."

Always a deeply serious and committed revolutionary socialist, Dick was indefatigable as Labour Club secretary and president, organising internal meetings, camping trips, the Left Book Club, seminars and public meetings on the issues of the day. He took the Leninist prescriptions for democratic centralism to heart, and followed unquestioningly the current Party line, and the necessity of loyalty to those in leadership positions.

At various times he was secretary of Party branches and a member of state committees. He made wireless broadcasts on behalf of the Party, sold his allocation of Party newspapers and threw his energies into whatever campaigns the Party was engaged in. His ASIO file expends many words on his leadership of the Australian Soviet Friendship Society. In 1949 he was also noticed by ASIO for his vigorous heckling, arguing the Party line against various speakers in Adelaide's Botanic Park.

To some degree, Dick's work on behalf of the CPA was hindered in the 1940s and ‘50s by the extensive field work he was required to do as an agricultural scientist. From 1938 to 1945 he worked at the Mallee Research Station at Walpeup in Victoria. In 1946, recently married to Jean Muir, and with one child, he was employed by the CSIR (Council for Scientific and Industrial Research). Again, he was in country South Australia for extended periods, researching soils.

His presidency of the South Australian branch of the Australia Soviet Friendship Society led to more than the obvious social, recruitment and propaganda activity. In 1960 he welcomed (with comrade Arthur Shertock) the cellist, Rostropovich, in Adelaide for concerts, and entertained him at home. Being an active communist at the height of the Cold War caused various problems. Neighbours contacted ASIO—why was he being let near the Woomera Rocket Range? He was nowhere near, but his and his wife's door-to-door selling of the party newspaper gave them a reputation in their neighbourhood.

When his wife, Jean Blackburn, left the Party in 1956, Dick was initially devastated. He is reported as telling her that she was a mere "grain of sand"; who would make no difference to the great forces of history that made a workers' revolution inevitable. Dick was one of many who denied for a long time the Khrushchev speech in 1956 that exposed Stalin’s crimes. 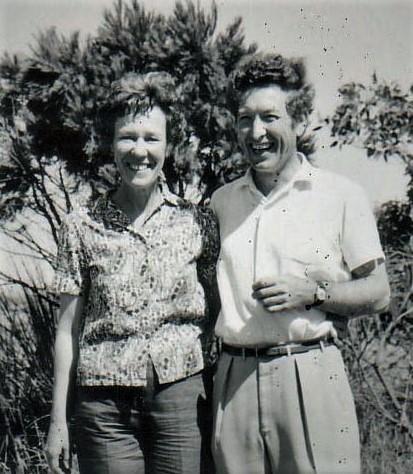 In 1961 when long-term ASIO spy, Anne Neill, retired, telling her story to Adelaide's Sunday Mail, Dick was one of many in the South Australian Branch who was publicly exposed to the broad public as a communist. It did not affect his employment, though it led to the occasional harassment of his children at school. As the Party endured the breakaways led by Ted Hill, and the pro-Soviet group, Dick remained firmly with the CPA.

In later years he supported the anti-Vietnam War protests, a continuation of the Party’s long- term peace advocacy. He was a reliable attendee, though rarely vocal, at Party state conferences. He continued to support the annual Tribune fairs by delivering children's toys he had made each preceding year. By the 1970s, much of his energy went into supporting his third child when his wife, Jean, was increasingly absent in Canberra and Melbourne as she made and directed policy for the Schools Commission and the Victorian Government.

Towards the end of his life, in 1990, Dick was concerned that, with the Party’s demise in Australia, its long-term contributions to opposing racism and White Australia, opposing fascism and censorship, and advocating justice for Aboriginal Australians and the imposition of green bans would be forgotten.

Craig Campbell is a historian, formerly employed by the University of Sydney. Born in Adelaide, he was a state schoolteacher and teacher union leader and for a short time, CPA member, in the 1970s and 1980s. He knew the Blackburn family, having travelled with Jean and Susan Blackburn in China in 1976.

Dick Blackburn's ASIO file is available through the National Archives of Australia. Despite the problems with such files, Dick's file provides an invaluable record of his political activity from the 1940s to the 1960s.