Denis Freney was well-known in Australia in the 1970s as the key campaigner for an independent East Timor, and for anti-apartheid protests against the South African regime. He was a member of the CPA from 1970 until the Party’s dissolution in 1991.

Denis Freney lived a life full of passionate commitment to fighting for a better world through the political Left. He was best known in Australia for his key role in organising the group, Campaign for an Independent East Timor (CIET), after the 1975 Indonesian invasion, and his earlier organising in the Vietnam Moratorium and other anti-war protests. He was the key campaigner and inspirer of the anti-apartheid protests against the 1971 Springbok rugby tour. He recounted all of this and more in his very readable autobiography, A Map of Days: Life on the Left, published in 1991.

Born in Sydney on 10 September, 1936, Denis’s attachment to the Left began as a teenager, when he joined the local Australian Labor Party branch in Harbord on Sydney’s northern beaches. He later joined the CPA at Sydney University where he studied Arts, majoring in history and English. But after Khrushchev’s 1956 secret speech on Stalin’s crimes and the subsequent invasion of Hungary, he was expelled from the CPA and joined the Trotskyist movement.

His commitment to the Fourth International, as it was known, began ten years of sometimes dangerous travel to promote anti-colonial rebellion and socialism. In Johannesburg in 1961, in the wake of the lifting of a State of Emergency, he made contact with the Committee for National Liberation. This mainly white group planned and carried out sabotage and prepared for guerrilla warfare against the apartheid regime. In one memorable incident he was in a car with one white and two black members of the CNL when the police pulled them up. The Afrikaans-speaking white driver dealt with the policeman, remarking later that they were lucky he had not looked in the boot: it was full of stolen detonators being used to blow up electric pylons. Denis’s experiences in South Africa developed in him a life-long contempt for the racist regime.

In 1963 Denis travelled to newly free Algeria to work with the English language Algerian Press Service and with Michel Pablo, a leading Trotskyist and an adviser to Ben Bella’s new Front de Liberation Nationale (FLN) government. With Pablo, he popularised the notion of ‘self-management’ – a form of grassroots control by peasants and workers which was designed to avoid the centralism and bureaucracy of Soviet-style socialism. A little later he narrowly escaped being caught up in a coup d’état in Algeria that occurred after a split in the FLN.

After 1968 Denis lived in Australia and became a dynamo on the Left, helping organise many protests against the war in Vietnam and setting up a suburban shop, Liberation, on Sydney’s northern beaches. As a teacher in the same area, he became the centre of a major industrial dispute when he was victimised by being compulsorily transferred to another school. His position symbolised the frustration of many newly militant teachers with the Education Department’s bureaucracy and authoritarianism.

By the late 1960s the CPA was evolving away from Stalinist-style Marxism and had condemned the Soviet invasion of Czechoslovakia. Largely because of these changes, in 1970 Denis Freney rejoined the CPA, to the displeasure of the pro-Soviet minority. In this period and later, Denis worked as a journalist on the CPA paper, Tribune, introducing coverage of the youth revolt and counter-culture to a hitherto rather stuffy Left newspaper. In 1971 he wrote one of the first articles in Australia reporting the emergence of the militant Gay Liberation movement in New York. A short time later he acknowledged his own homosexuality by coming out and becoming one of the early activists in the local gay movement.

The massive campaign against the 1971 Springbok rugby tour which ended sporting contact with South Africa, was largely driven by his energy and that of a small number of others. On one occasion his house in Glebe was raided by police who planted, then ‘discovered’, smoke-flares in his bedroom. There was little need for this, since the police discovered Denis’ own smoke flares in the boot of his car. In 1972 Denis played a key role as co-convenor of the Black (Aboriginal) Moratorium, an initiative that arose after Aboriginal activists challenged those concerned about apartheid to look in their own backyards. The Moratorium saw successful national demonstrations under the new Aboriginal flag and a strong impetus to the land rights struggle. 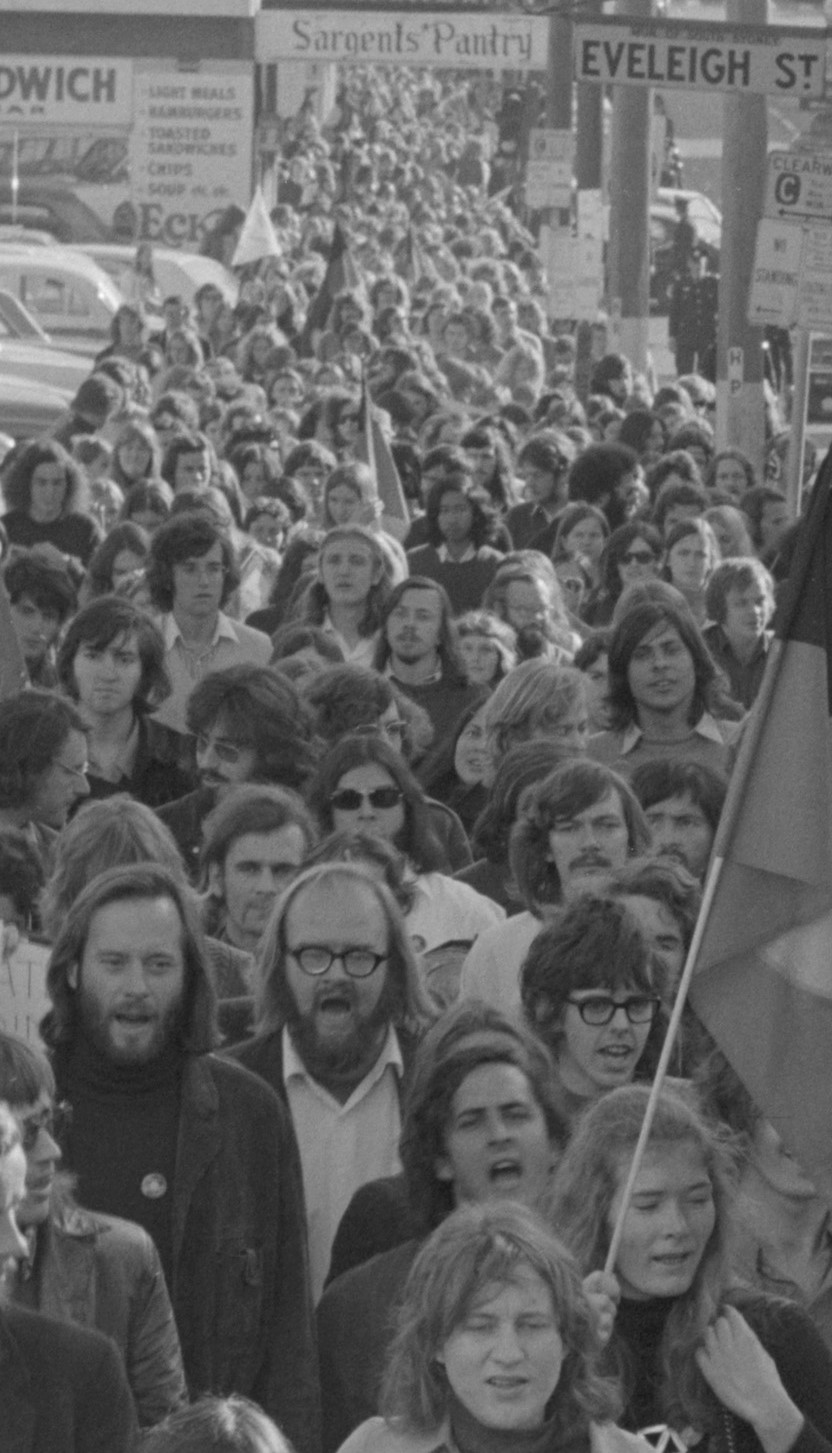 It was the campaign for an independent East Timor which became Denis’ main preoccupation after the Indonesian invasion of December 1975. His commitment to East Timor began well before the invasion, when he organised a trade union and community delegation to the newly liberated Portuguese colony in 1974. Later he produced newsletters, arranged speaking tours, liaised with Fretilin representatives at the United Nations and was a never-ending source of energy in the Timorese cause. In those early years he set up a much-needed radio link with the Fretilin guerrillas. Though harassed by Australian intelligence, Telecom and police, this vital contact survived for more than 18 months. 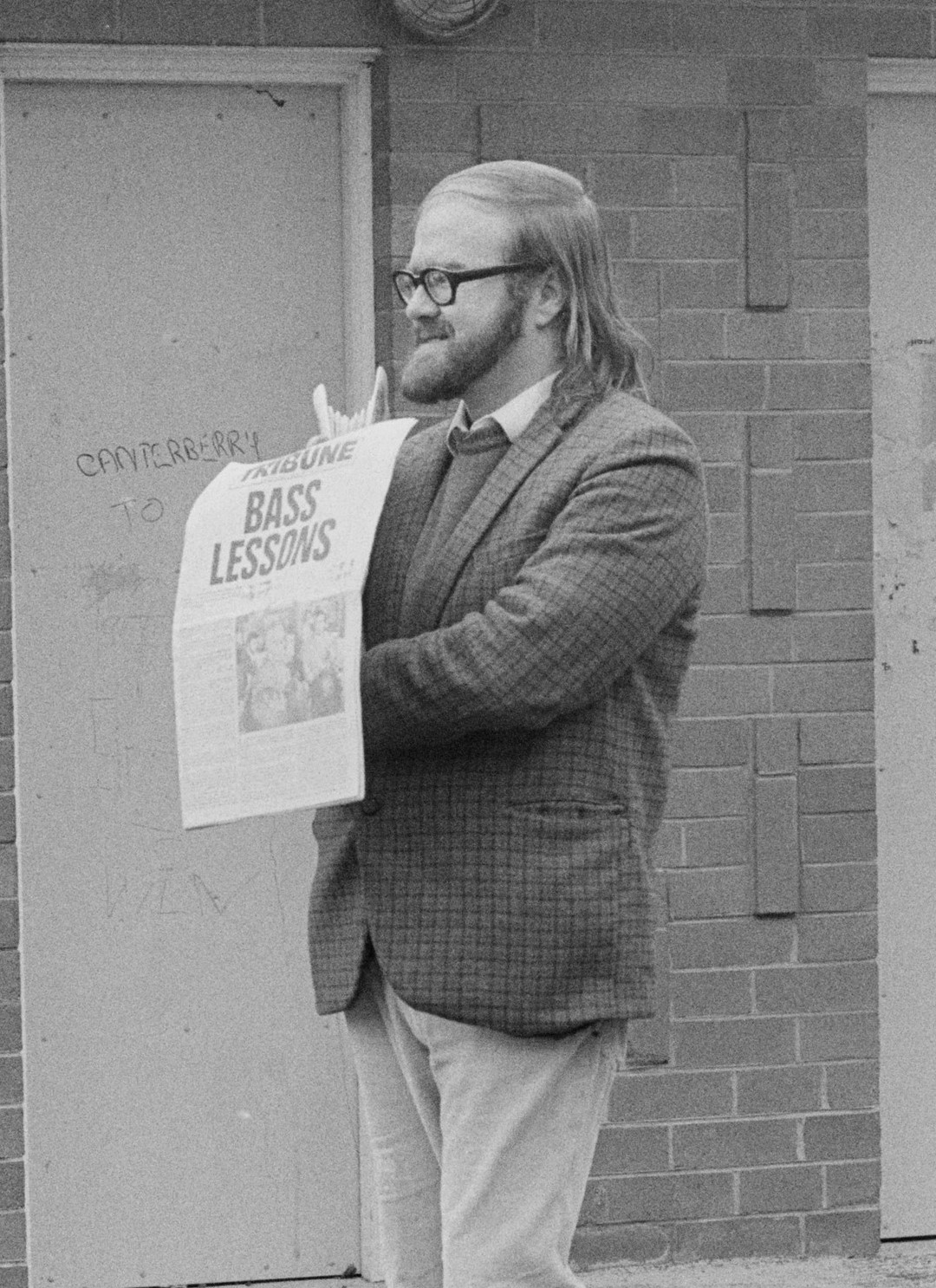 In 2014, along with Northern Territory communist, Brian Manning, who worked with him on the radio link, Denis Freney was posthumously awarded a state honour by the Timor Leste government. The citation described him as a pioneer of the Australian movement in solidarity with East Timor and praised his ‘patience and perseverance’ for his work on the Darwin-based illegal radio and the publication of the newsletter East Timor News. 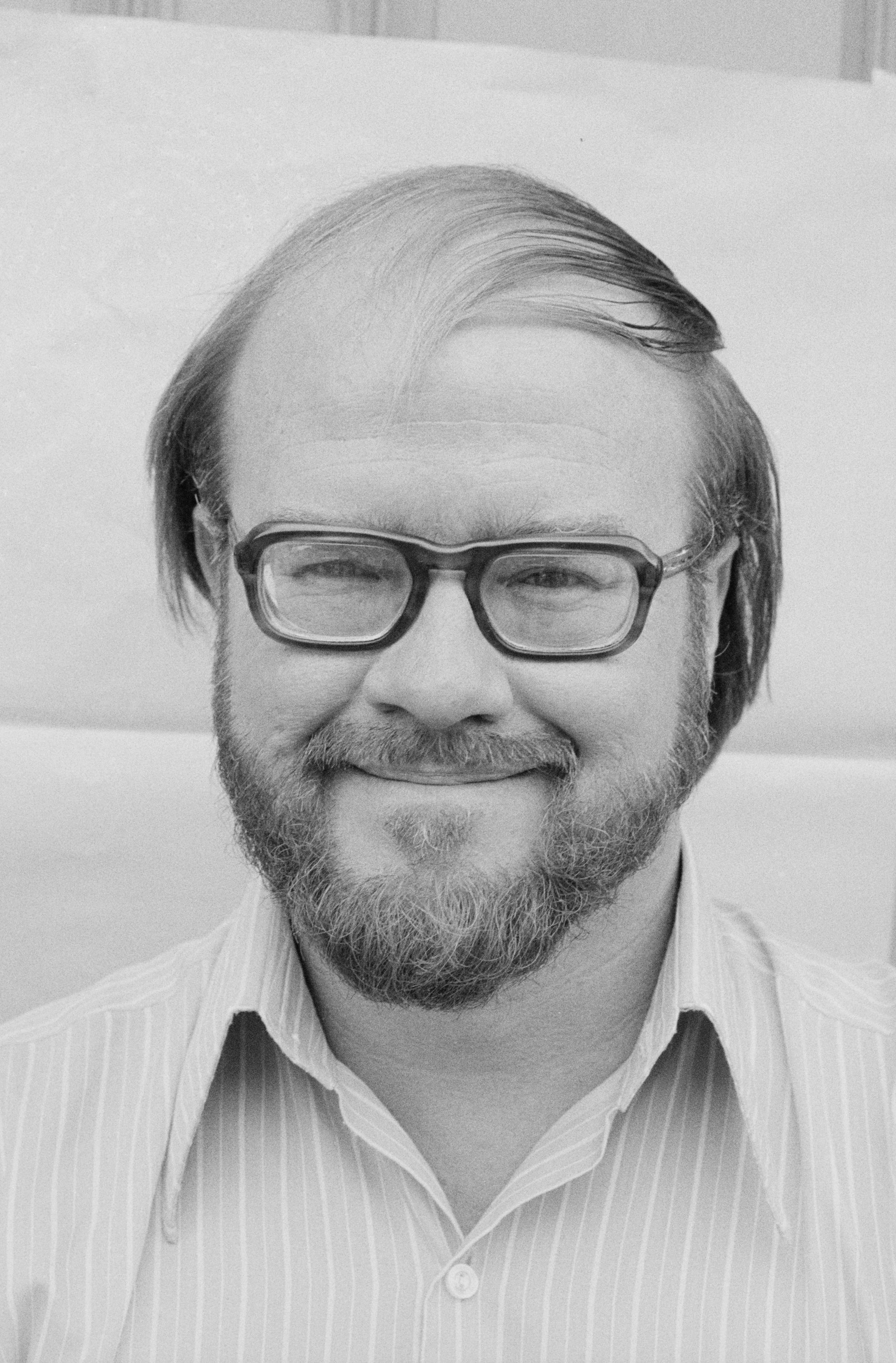 In the early 1980s Denis was inspired by the emergence of the Solidarity union movement in Poland and visited that country to interview leading activists for Tribune. In later years he was hopeful that the policies of Soviet leader, Mikhail Gorbachev, might evolve to create a form of socialist democracy which he himself passionately believed in. 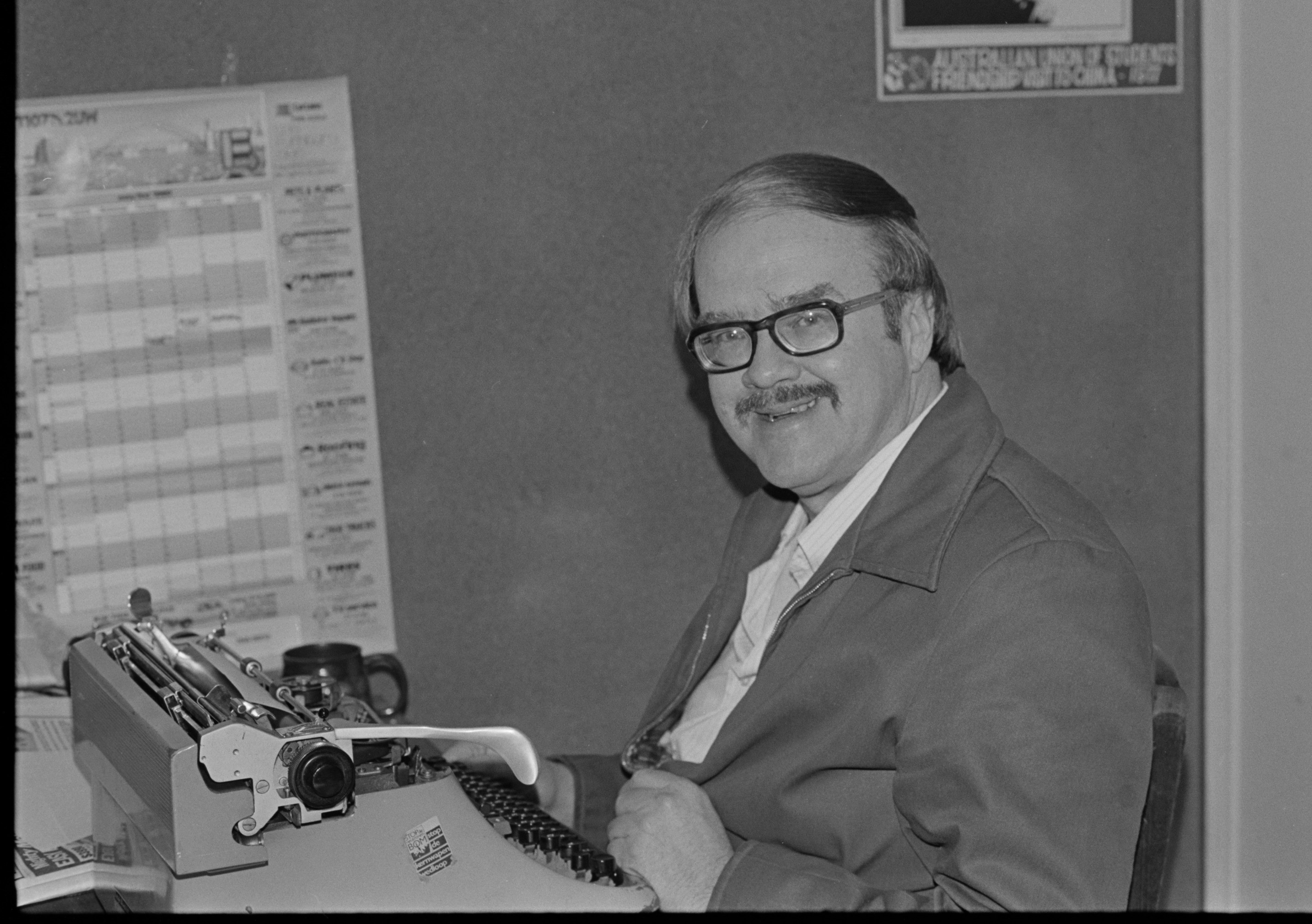 Denis Freney, Tribune office, 1980-1, with his weapon of choice.

Denis was a member of the CPA for 20 years and was among those who successfully struggled to renew the CPA's vision of a more democratic kind of socialism. He was also a member of its National Committee.

For much of his life, Denis sacrificed his personal life to broader goals. Yet he always had a circle of close friends, with whom he shared communal houses and the hot curries for which he was famous. He was not always an easy man to get close to and his single-mindedness sometimes drove even his closest friends to distraction.

In his last years, like many on the Left, he began to re-think the meaning of his lifelong commitment, though he never wavered from the egalitarian, socialist and secular values at the heart of his beliefs. He was a man who regretted nothing he had done and was proud of most of it. His life was a testament to the idea that committed individuals can make a big difference to the society in which they live. Denis Freney died on 2 September, 1995.

David McKnight was a lifelong friend of Denis Freney, having worked on Tribune with him and shared communal houses for many years. David is also a journalist and academic at the University of NSW. He is the co-author of Big Coal: Australia’s Dirtiest Habit, and the author of Rupert Murdoch: An Investigation of Political Power, as well as Beyond Right and Left: New Politics and the Culture War, and Australia’s Spies and Their Secrets. Apart from Tribune he worked as a journalist on the Sydney Morning Herald and ABC TV’s Four Corners.