Expanding and deepening democracy must be an important part of socialist and progressive policy. Growing cynicism about corruption and politics in general, in Australia and elsewhere, feeds the far right and forces of reaction. Deepening democracy requires better electoral and representative systems, meaningful industrial and economic democracy, and participatory mechanisms to involve citizens in policy debates and decisions. It also means redressing the historical injustices and lack of diversity in our parliaments and in positions of economic and social power.

Australians have achieved important democratic rights, including the right to vote, the secret ballot, preferential voting, and compulsory voting. The conduct of Australian elections is largely free, fair, independent and transparent. But voting systems for our lower houses of parliament do not reflect the popular will as accurately as they could, except in Tasmania and ACT that use forms of Proportional Representation.

The power of money and concentrated media ownership and control also skew elections in favour of parties and candidates that represent corporate interests and private wealth. The obscene amounts that billionaire Clive Palmer has spent on the 2019 and now this current election provides one glaring example. The role of the Murdoch media provides another. Indeed, former Prime Ministers Rudd and Turnbull have called for action against ‘the pernicious power of Murdoch’ and Turnbull has said that  ‘News Corp is “the most powerful political actor in Australia”… ‘.

Our existing political-economic institutions are therefore far from the highest form of democracy. Elections are not as free and fair as they should be when there are no limits to electoral expenditure, insufficient transparency in the funding of parties and candidates, and little if any restraint on the often-blatant bias of the corporate media. As a result, taxation policies, ‘corporate welfare’, and responses to climate change are just three areas captured by private interests at the expense of wider social interests.

The lack of diversity and representativeness among politicians and other power holders is another impediment to democracy. Older, white men still dominate politics, corporations, churches and many other organisations. Parliamentarians, holders of public offices and corporate directors lack diversity by class, sex and ethnicity, among other measures.

A radical democratic program for the 2020s

Institutional, constitutional and electoral reforms are needed to expand and deepen democracy in political, social and economic decision-making. Two key aims are to ensure that the make-up of parliamentarians and appointees to public institutions mirrors the Australian population and that politics is not tainted by money and controlled by the wealthy. Some important steps include the following.

These are just some measures that would expand, deepen and protect democracy. They can be vital steps towards redressing the power imbalances inherent under capitalism. Such changes can also provide a basis for the even bigger and longer-term challenges of building participatory, economic and industrial democracy that reflect socialist goals and values. 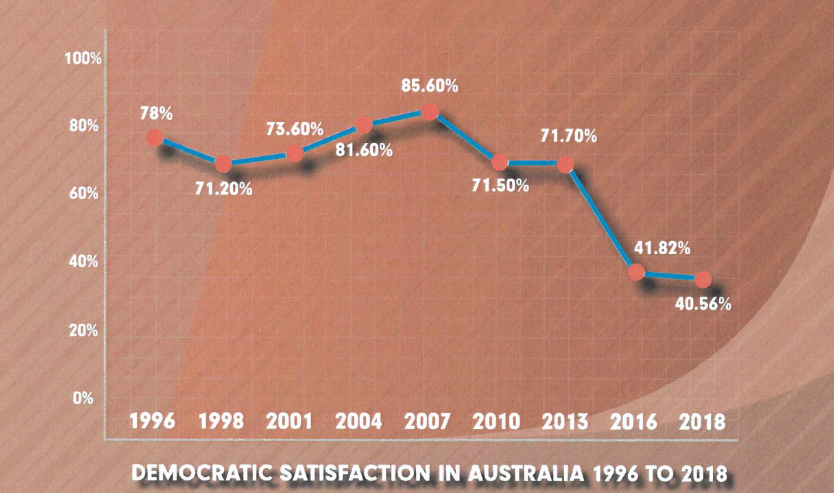 Levels of trust in government and politicians in Australia are at their lowest levels since times series data has been available (also available at https://www.democracy2025.gov.au/documents/Presentation%20to%20IPAA%20Future%20Leaders%20Program%20on%20Trust%20in%20Government%20August%202019.pdf)