When Wollongong based artist Zanny Begg shot her film ‘The Beehive’
in 2018 it had been over 40 years since the disappearance of Juanita Nielsen,
activist and publisher of NOW Magazine.

Begg’s lm uses Nielsen’s disappearance as a departure point to consider many ideas pertinent to urban Sydney today including gentri cation and the contested status of public space. A cast of actors and non-actors (including Bronwyn Penrith, David Farrell, Imogen Kelly, Pamela Rabe and Ian Millis) o er recollections from their time in the 1970s and dramatic and ctionalised reinterpre-tations of events leading up to Nielsen’s disappearance. The footage was then spliced together by a software al-gorithm which reorders the video sequences and presents viewers with a random selection of the shots.

In the UNSW Galleries presentation of the work in early 2019, visitors to the exhibition walked through a gallery space showing historical images and archival material from the 1970s before reaching the room which housed the lm itself. Many of these images, including photos of Nielsen’s home on Victoria Street, were reproduc- tions from past editions of Tribune Magazine, which SEARCH generously permitted Begg and UNSW Gal-leries to use. The images gave ‘The Beehive’ a tangible historical context and also pointed to the importance of archiving and preserving the visual and material culture of radical movements.

Accompanying the exhibition, and giving further context to the Tribune material was an extensive series of talks, documentary screenings and walking tours that I put to-gether in my then role as Public Engagement and Events O cer at UNSW Galleries. The name of the program series, ‘Radical Sydney’, took its name from Terry Irvingand Rohan Cahill’s book of the same name, and soughtto engage with the histories and futures of local activism concerned with housing, public space, sexuality and gen-der. We partnered with the Juanita Nielsen CommunityCentre in Woolloomooloo to host the events that dealtwith issues particularly poignant to local residents, in-cluding the nal talk ‘Justice for Juanita’.

‘Learning from the Green Bans’ included a screening of Pat Fiske’s ‘Rocking the Foundations’ and was followed by a talk with Fiske and Meredith Burgmann. Their dis-cussion of the ongoing importance of the NSW BLF was picked up later in the series by Millers Point Activists after a screening of Blue Lucine’s ‘The Eviction’, a more recent documentary on the class warfare surrounding the Sirius Building. Sex worker rights activist Julie Bates 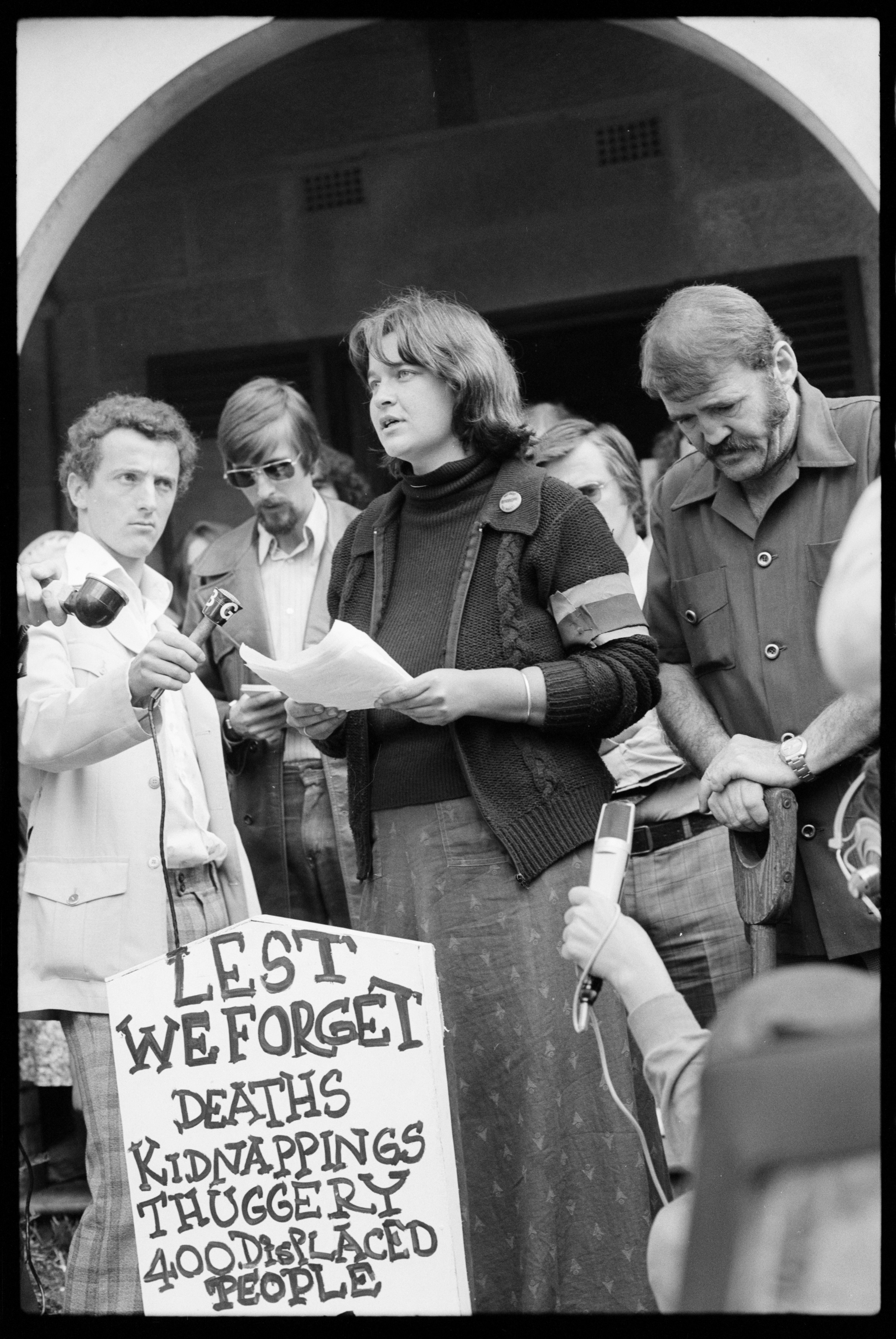 AO led a walking tour through Kings Cross, highlighting the role that sex work and public health activism played in curbing the burgeoning aids crisis of the 1980s in Sydney, whilst the panel ‘Sydney Clubcultures and Sub-cultures’ attracted an audience of 500 who came to hear from foundational members of Sydney’s queer nightlife scene including Matt Stegh and Club Kooky founders on strategies for alternative community building in the face of rampant gentri cation and privatisation today. Wendy Bacon, Eva Cox AO, Phillip Thalis, Ian Millis, Bronwyn Penrith and David Farrell appeared as speakers elsewhere in the program.

My own learnings from curating and overseeing Radical Sydney were extensive. The program was attended very well, and I noticed that members of the public – both those involved with 70’s activism and those new to such histories and practices – wanted an opportunity to con-nect with generations above and below them over these pertinent issues. The program spanned two months with events happening most weeks, which gave audiences the chance to engage with key issues over a longer period of time rather than attend just a one-o event; I found this to be an e ective programming strategy. Whilst some of the histories being discussed, particularly the Green Bans movement, have become canonical moments in radical Australian history, the program in its entirety attempt-ed to connect and intertwine other lesser known radical Sydney histories too as a way of building education and solidarity amongst diverse subcultures and organisers.

An upcoming book will be published by NEWSouth and will feature a number of essays and conversations that expand out from ‘The Beehive’ itself and the Radical Sydney program. Texts will explore storytelling methodologies and non-linear understandings of time; feminist approaches to histories of social movements and contest-ed spaces; the lineages of the Green Bans and 70s radicalism for contemporary Australia; and critical spatial theory and gentri cation.