Alec Robertson was Editor of Tribune, the CPA newspaper, from 1964 to 1974, the first professional journalist to hold that role. He was a major influence in moving the Party to an independent position in the 1960s.

Alec was born on 25 August 1918 and grew up in a family where ‘political journalism’ was a fact of life. His father (after whom Alec was named) was the editor of the Brisbane Daily Standard – the only daily Labor newspaper to be published in Australia – and later the manager of the first Labor Party radio station, 3RRR. Alec’s father was the first member of the Australian Journalists’ Association to attain 50 continuous years of membership. Through his father, Alec gained a cadetship with the Brisbane Courier Mail, owned at that time by Sir Keith Murdoch. Alec joined the CPA in 1939.

The entry of the Japanese into World War II prompted Alec to enlist in the Australian Army in 1941. He was promoted to lieutenant and sent to New Guinea, seeing action in Milne Bay and elsewhere, until being evacuated in late 1942, seriously ill from tropical disease acquired in that challenging theatre of conflict. After recovering, he resigned his army commission and joined the Australian Airforce, trained as a pilot and gained a second officer’s commission, training young men as light bomber pilots, while stationed in South Australia.

Returning to the Courier Mail after demobilisation, in 1947 he was awarded the Kemsley Empire Journalism Scholarship, the first Australian to do so. He married Margaret, a press photographer, and together they travelled to Europe. They spent a year in London as well as visiting post-war Germany, working for various Fleet Street newspapers and with Alec also presenting an Australian’s ‘View from London’ on BBC radio which was broadcast back home. In 1948, having gained foreign correspondents’ credentials through London’s Reynold’s News, they travelled further afield through Eastern Europe. This period included time working with youthful volunteers of United Youth Organisation Brigades in Moravia, building a new railway in Czechoslovakia, which Alec found inspiring. Shortly after returning to Australia in 1949, he was fired by Keith Murdoch himself for refusing to obey editorial instruction to cease his anti-war and anti-fascist activities, as recorded in Tribune, 19 March 1974 p. 3.

Moving to Melbourne, Alec worked as the sub-editor of the Melbourne Argus newspaper, before becoming a full-time worker in the Victorian Peace Council in 1950. He moved to Sydney in 1951 to become the secretary of the NSW Peace Council. At this time, he met my mother, Mavis Moten. Alec and Margaret had recently divorced. Alec and Mavis were married in Sydney in 1953, and Mavis changed her name to become Mavis Robertson. Her Catholic father was outraged, as Alec was 13 years older and a divorcee. However, in time Alec won his hostile father-in-law’s admiration and they became good friends.

Alec was elected to the CPA’s Central Committee in the 1950s and later to the National Committee. He joined Tribune as a journalist in 1957 and became its chief editor in 1964. As Tribune editor, he served as a member of the Party’s National Executive. Alec’s formal journalistic training evolved Tribune’s style and language away from formulaic ‘communist jargon’ and political diatribe, towards a plain English reporting and writing style. 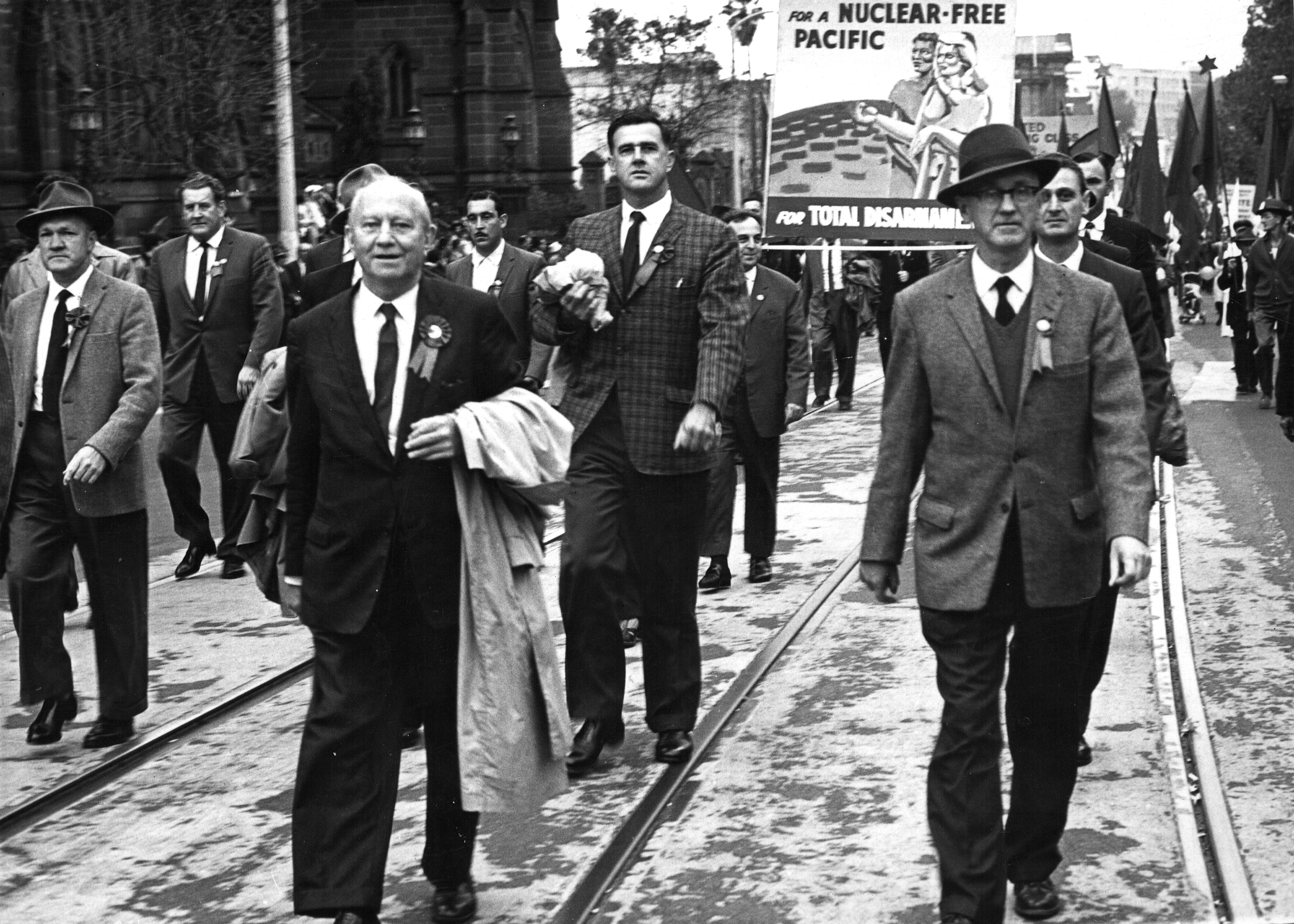 Alec travelled widely to many countries, both in his capacity as a Tribune correspondent and as a CPA representative. He travelled in ‘secret’ to China in November 1955, not returning to Australia until late 1956. I was 11 months old when I first met my father upon his return.

Following his war experience Alec maintained a great interest in Papua New Guinea, writing and generally promoting the cause of the then nascent Free PNG Movement for freedom from Australian government administration. In the 1970s the Australian government twice denied him permission to return to PNG. In 1971, when I was 15, Alec insisted that I participate in a high school excursion to PNG so that he could interview PNG independence advocates ‘by proxy’ via me and a cassette recorder. My accompanying teachers grew increasingly perplexed by the number of locals who came to meet me throughout this trip.

Alec actively engaged in the anti-Vietnam war movement as a demonstrator, speaker and tactician. The disruption of the Sydney Stock Exchange on 2 July 1970 was initiated by Alec, who made a speech to the stockbrokers condemning the role of Australian and US companies profiting from the Vietnam war, in front of boards sprayed with the slogan “Victory to the NLF” [National Liberation Front]. The ‘raiding party’ left 10 minutes before the police arrived. Thereafter the Exchange’s security was upgraded to prevent subsequent ‘invasions’ of this nature. Alec wrote about the demonstration in Tribune as if he had been a by-stander. Both Alec and Mavis continued to demonstrate against social and political injustice. I recall their several arrests and court cases in connection with demonstrations, particularly in anti-Vietnam campaigns.

He worked with many campaigns: indigenous land rights, anti-apartheid and anti-nuclear, amongst others. Discussions between Alec and Mavis around the family kitchen table in our house in Balmain were always lively. I witnessed the Six Day War at that table in 1967 as my parents debated the merits of that Arab-Israeli conflict. The Balmain house, built by Alec and his mates on a small plot on Birchgrove Road, saw many visitors from around the world. Pete Seeger came one night in 1961 and played in our loungeroom. The visiting Soviet poet, Yévgeny Yevtushénko, also came – at the insistence of the writer, Frank Hardy – to give a “private recital” for the CPA leaders. Mavis spoke about this on 24 August 2003, when the book Frank Hardy and the Literature Commitment was published:

This was held in that large room in our house in Balmain and it was organised by Frank Hardy. Over many hours, Yevtushénko gave a many-sided view of Soviet society and answered endless questions on art, work, democracy, dissent and much more. It was a defining moment and one of trust since no one ever used the fact of those discussions for their own advantage and no one ever told the rulers of the Soviet Union what had transpired.

Both Alec and Mavis were strong supporters of Frank Hardy, following publication of his 1968 article “The Heirs of Stalin” in the London Sunday Times, which prompted a move by some CPA members to have him expelled. Alec argued strongly in Hardy’s favour, supporting the view that the previously ‘sacrosanct’ regard for the Soviet Union as the ‘model’ society was flawed, especially given its invasion of Czechoslovakia in 1968.

Alec was a key member of the Laurie Aarons-led CPA Central Committee throughout the late 1960s and early ‘70s, contributing to the independent international position adopted by the CPA, outside the influence of both the Soviet and Chinese Communist Parties. He was greatly respected by many on the Left for his humanitarianism and for his comradeship.

Alec continued his work until his untimely death on 15 March 1974, aged 55, following an acute asthma attack – a condition he had developed while serving in the RAAF.

As John Sendy said in his eulogy to his old comrade Alec:

Being editor of Tribune is perhaps one of the most arduous, certainly one of the most underpaid, and sometimes one of the most thankless jobs one could imagine – one of the hardest, perhaps the hardest, in the Party. Under-staffed and under-financed, the paper appeared every week – often in difficult times – always with its critics, its enemies, its supporters. Alec’s word was always there for everyone to see, to be wise about, to have a go at. He often really copped it – justly and unjustly. He always felt it but harboured no resentment – and that takes some doing. Without doubt, he was the best and most respected editor Tribune ever had.

Peter Robertson is the only child from the marriage of Alec and Mavis Robertson. While very active in the late 1960s and early 1970s as a high school student activist (and always in the company of his parents during their political campaigns), after leaving University – possibly as a consequence of a childhood spent being fearful of the attention from ASIO that his family’s activism attracted – he ceased his political activity, and travelled overseas, returning many years later to work in nursing and eventually formal clinical research.

Mavis Robertson, Personal papers: Speech made on August 24 2003 in Melbourne, possibly at a function related to the publication of Frank Hardy and the Literature of Commitment, edited by Paul Adams and Christopher Lee. Mavis’ personal papers otherwise reside in the ANU Library Archives Program.