“Kelon Ya‘ani Kelon” (Everyone Means Everyone) for Lebanon’s Revolutionaries

Beirut, Lebanon: Monday 20 January 2020 dawns, revealing a fragile calm that has descended on the streets of Beirut. The tear gas and smoke have cleared, although the broken glass from smashed storefronts remain, as does the palpable smell of burning tires.

The weekend just passed, the culmination of a declared “week of rage”, bore witness to a noticeable shift in the uprisings that have taken hold of Lebanon since October 2019. These uprisings, referred to in Lebanon as a thawra – revolution – challenge the very foundations of the Republic’s post-civil war social, political and economic order. Lebanese who continue to march and resist against the status quo, despite the formation of a new government on January 22. They reject the political class and the order they have constructed from the rubble of Lebanon’s civil war (1975-1990). The totality of this rejection is reflected in the popular slogan: kelon ya‘ani kelon –everyone means everyone.

There were innocuous beginnings. On October 17 2019, the former government of Saad al-Hariri announced a tax revenue initiative on voice over internet protocol (VOIP) calls, made on servers such as WhatsApp. Protests appeared almost immediately in the Martyrs’ Square of downtown Beirut. What has become known as the WhatsApp tax was merely the latest in a long line of measures that have resulted in a prolonged economic crisis. Costs of living had doubled, and unemployment figures reached in excess of 25% before the revolution began. 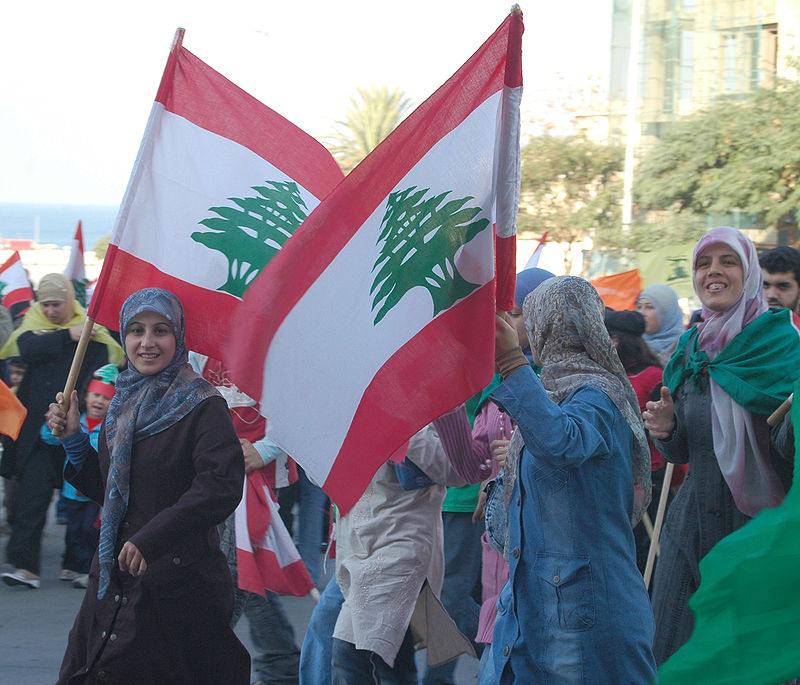 Lebanon’s Banks tightened the noose, announcing capital controls on deposits in the early days of the uprising. Withdrawals of US dollars in-particular were reduced to $200 per account per week. In a country whose local currency is pegged to the Greenback ($1 US was officially traded at 1,500 Lebanese Lira), and where many payments are made in dollars rather than the Lira; these controls contributed further to depreciating conditions. As of February 2020, these capital controls, which banks off-record acknowledge as “not legal but necessary” remain in place. Across Beirut’s suburbs from its most affluent quarters to its most destitute, businesses large and small have closed, leaving a trial of closed roller-door shop fronts, targets for posters and graffiti.

But this is not just a revolution against economic conditions. Equally it is an uprising against the prevailing ordering of institutional politics. Lebanon is a consociational democracy in which political portfolios are divided among the country’s main sectarian communities. Sectarian identification influences the composition of the Executive and Legislative arms of government, with the presidency reserved for a Maronite Catholic, the premiership for a Sunni Muslim, the deputy premiership to a Greek Orthodox, and parliamentary speaker reserved for a Shi’a. Cabinet positions are similarly divided along confessional lines. Debates concerning the physical make-up of cabinets frequently drag on for weeks if not months, as the leaders (zaim/zulima) of sects jostle for positions which are assigned not according to competency so much as identity.

But there is something more profound at work that fuels the ongoing discontent and desperation: a rejection of the fusion of political with financial/economic power in Lebanon. This fusion, referred to by some as harirism – after former prime minister Rafiq al-Hariri, has its roots in the post-war reconstruction of Lebanon. Rafiq al-Hariri, a billionaire two-times prime minister between 1992-1998 & 2000-2004 (and father of later prime minister Saad al-Hariri 2009-2011 & 2016-2020), is credited with the reconstruction of Beirut’s central business district through the company Solidere he created in 1994. Blurring the line between public and private finance, ownership and interest, Solidere has, and continues to be, criticised for the manner by which it operates, expropriating public land, and pressuring owners of private dwellings to sell at low prices relative to value or company shares; allowing the firm to sell-on the redeveloped site for maximum profit margins.

What Rafiq al-Hariri achieved more than any politician before him was a fusion of business and politics, linking political success in post-war Lebanon with access to capital. That his lessons have been heeded is evident in the banking sector, where some eight prominent families effectively control 32% of all commercial banking assets in Lebanon. BankMed for example is owned by the Hariri family’s Group Med, the Kassars have prominent stakes in Fransabank, Byblos Bank meanwhile is managed by the Bassils. All of these families have produced cabinet ministers. Since the formation of the new government under premier Hassan Diab, some momentum has been lost as the wider population appear to heed calls to give the government a chance. Yet very few people in the country expect Diab’s administration to fundamentally alter Lebanon’s present trajectory. The current display of hope is therefore more a desperate longing for improvement rather than an indication of confidence. Kelon still means everyone.

Paul M. Esber is a Post-Doctoral Fellow at the Orient
Institute Beirut.