The ACTU Congress is to be held in Brisbane on July 17th and 18th.

This will almost certainly be the last Congress before the Federal Election. And the big issues at stake in the Change the Rules (CtR) campaign should and can be discussed before the Congress by union members in their unions (in the traditional way) and across union boundaries in the various Facebook pages that are available, including the ACTU’s “Australian Unions” and the Change the Rules Activist Network.

It is to be expected that the main focus of the Congress will be the Change the Rules campaign: progress since its launch in June 2017 and, further development in the context of the elections.

The ALP will be very keen, with the support of laborist leaders in some unions, to narrow the scope of both the priority demands and the method of struggle. They will be focussed especially on weakening the commitment to the “right to strike” as a priority demand for change to the Act.

Since the country wide demonstrations that highlighted the May period, there has been escalated activity at the local community level. Community based CtR groups are being formed in many locations. Some are now being supported by full time organisers as bases to defeat LNP candidates in the elections. Also, more meetings and facebook pages of union activists and members are discussing and endorsing the ‘right to strike” as a prime priority. Nevertheless, the CtR campaign is now taking on a very strong electoral character.

In the previous SEARCH News my brief observations about the progress of the CtR campaign concluded that the Campaign needed wider and deeper discussion on a number of critical questions, but did not elaborate.

What follows is a short summary of what they might be. 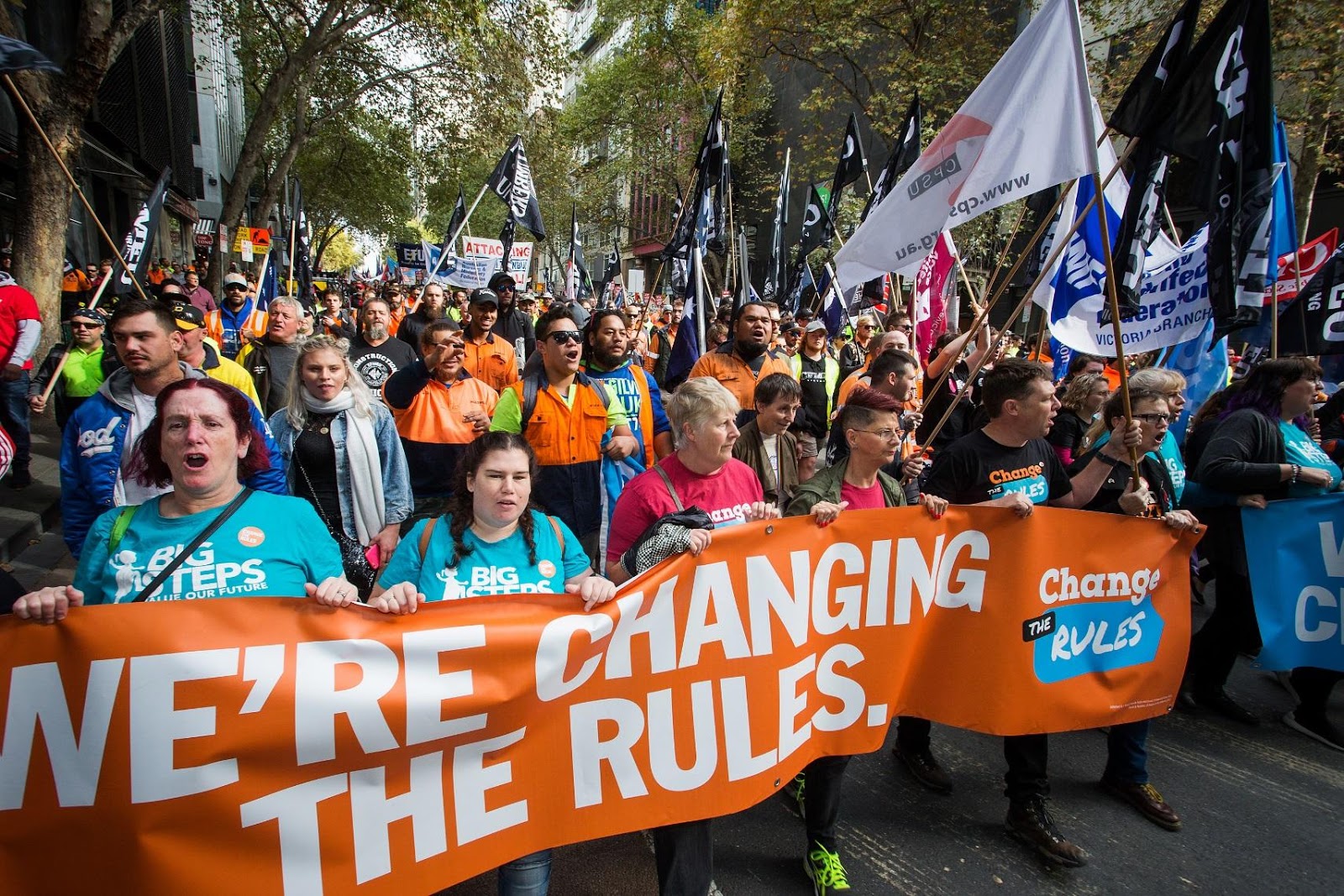 Protesters Campaigning to Change the Rules in Melbourne

The fundamental strategic and policy question issue is: what should be the primary demands and method of struggle? Should new laws enable stronger power to be exercised by workers and their unions, including in industry and award bargaining? Or should they seek to strengthen the power of the Fair Work Commission to conciliate and arbitrate on a broader range of matters and for union representatives to have stronger right of entry rights? Should the developing struggle be predominantly electoral or industrial, and in the event of a better industrial strategy, to what extent should it seek to defy instead of obey the broken rules?

Some of the questions that can be discussed at all levels of the movement include:

Some union leaders, and their supporters in the mid-level of the union movement, will not be comfortable with such questions and discussion or the direction they might take. Discussion of such issues is also relatively alien to the newly emerging middle levels of the union movement, many of whom were not around for the [email protected] campaign over 2005-9, but who have become active since then.